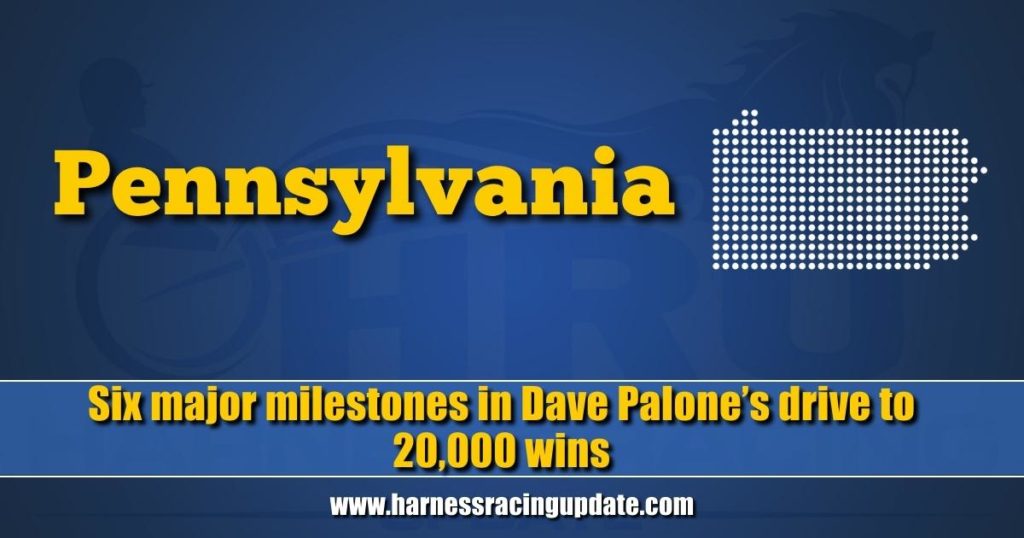 On Saturday (June 25) at The Meadows, driver Dave Palone crossed the finish line first for the 20,000th time, becoming the first (and possibly the only) driver ever to accomplish that feat.

Harness Racing Update takes a look back at six of his record-setting wins and the impact they had on his career.

An announced crowd of 2,920 came to The Meadows on a spring Tuesday evening not expecting to see any history being made, but in the next to last race of the evening, a 21-year-old Dave Palone scored his first career victory in a conditioned claimer (for a $10,000 – $17,000 tag) for a purse of $2,100.

Palone tripped the timer in 2:04.2 with a 4-year-old Plucky Boy—Lisa Havens mare by the name of Reds Folly.

Palone rewarded his backers with a $5.20 win and padded his wallet as he was also the owner of Reds Folly.

“It took me 24 drives to get that first one. It was a great thrill to get that monkey off my back,” Palone said nearly three decades after that first win.

“I honestly don’t remember it,” said Huston, laughing. “I can tell you that I probably announced 18,500 or so of Dave’s wins.”

For horsemen in western Pennsylvania, Delvin Miller was a legend and the ultimate goal is to win the Delvin Miller Adios Pace, The Meadows’ signature event for 3-year-old colt pacers.

Prior to 1999, only two Meadows-based drivers had hoisted the statue of Miller’s prized stallion — Dan Ross with Legacy Of Power in 1997 and Dick Stillings who steered Barberry Spur to victory in 1986.

The 33rd edition of the ‘Pace for the Orchids’ featured the eventual Triple Crown winner, Blissfull Hall and driver Ron Pierce.

Blissfull Hall easily took the first elimination with a gate-to-wire victory in 1:53.1.

Palone and Washington Vc came off the pace and scored a 2 1/2 length upset in the third $63,184 elimination. They rewarded their backers with a $34 win payout.

Pierce gunned Blissfull Hall to the front at the start while Palone and Washington Vc lagged near the rear of the field. After being seventh at the half, Washington VC advanced three-wide going into the final turn and then drew off to win by 2 3/4 lengths in 1:52.3.

Dave Palone came to the Delaware County Fairgrounds on Jugette Day in 1999 with 6,679 career wins.

Palone was quoted in the winner’s circle later that day that he would “trade a lot of those wins for this (one).”

The then 37-year-old driver had just survived a four-horse photo finish and won the $303,500 Jugette Final with Maudlin Hanover.

What made this victory so special was the fact that Maudlin Hanover was conditioned and co-owned by his brother, Mike Palone. The younger brother co-owned the winner with fellow western Pennsylvanians, George Leon and the FLG Partnership.

Maudlin Hanover won her elimination in 1:53.1 and was made the 2-1 second choice to Beach Crystal (Richie Silverman) in the final, although the later was second in her elimination to Genuine Lady.

At the start of the second heat, Maudlin Hanover found herself fifth at the quarter and half-mile, despite having the coveted rail starting position.

Palone pulled Maudlin Hanover three-wide down the Delaware backstretch and stuck a nose in front around the final turn. The pair held off late rallies by Marfa Hanover (John Campbell) and Genuine Lady (Bill Fahy) and to capture the 29th Jugette in 1:53.

Palone has Grand Circuit talent, but chooses to apply his trade close to his western Pennsylvania base and family. He currently ranks 16th on the all-time driver win list at the Delaware County Fair with 48 victories.

Before 2005, he had never visited the DCF winner’s circle in the Little Brown Jug, but with three drives for trainer Kelly O’Donnell, Palone took two elimination wins (Up Front Tornado and P-Forty-Seven) and qualified all three for the $307,277 final (Up Front Jerry – third place).

The third elimination was one of the most memorable elims in Jug history. Rocknroll Hanover and Brian Sears grabbed the early lead and Palone found a home behind Gryffindor and David Miller in third. When Gryffindor got into the back of Sears causing the field behind to jam up.

Palone astutely moved P-Forty-Seven off the rail and was forced to race nearly five-eighths of the mile on the outside.

Rocknroll Hanover was game, but P-Forty-Seven finally put his nose in front in the final yards.

Rocknroll Hanover was blasted off the starting gate wings and grabbed the early lead. Long-shot Roddy Bags Again (Luc Ouellette) left from post seven and tried to pass the leader, but created a moving roadblock for the rest of the field. Rocknroll Heaven’s stablemate, Village Jolt (Ron Pierce) made a three-wide move down the backstretch and appeared to put enough daylight between themselves and P-Forty-Seven, but Palone timed his move perfectly and scored a ¾ length win to capture his only Little Brown Jug.

Palone won the third race of the day and looked to have a live shot in the fifth, a non-winner of one event for two-year-old filly trotters, with Herculotte Hanover.

It looked like he would have to wait another 20 minutes or so for his next shot at the record, but Palone used the inside “Lightning Lane” to find daylight to rally for a 2:00.1 score.

Returning to the winner’s circle for the 15,181st time, Palone saluted Filion by standing up in the sulky, not to show off, but to honor the man who used the same celebration in the Little Brown Jug and Prix de Ete, the Adios and the Little.

Filion, who was still an active driver at 72, was in attendance and was one of the first to greet the new record holder.

Palone was enshrined into the Harness Racing Hall of Fame in 2010 and owned the North American wins record, and only one record remained – Heinz Wewering’s world mark of 16,753 race wins.

Palone started the day four wins behind Wewering, but scored in the second, sixth, tenth and fourteenth to tie the German. The record-breaker came with a gate-to-wire victory in 1:57.3 with Missy Tap Tina in the 15th and final race on the card.

Following the race in a winner circle interview, Palone noted, “I am glad it’s over; it was a lot of work these last 10… These have been the toughest 10 wins, the last 10.”

The Meadows played a congratulatory video message from the German, who competed against Palone in the World Driving Championship in Sweden.