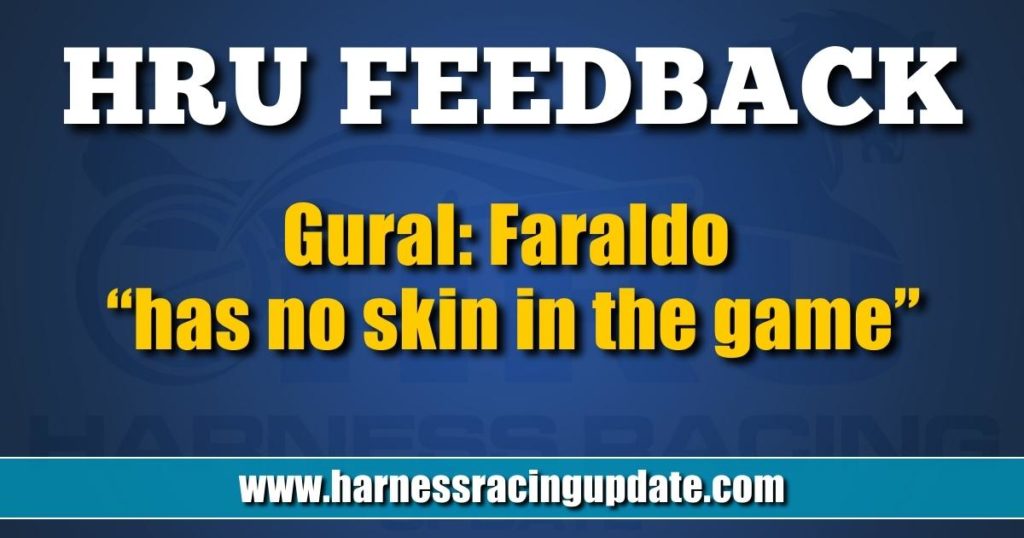 Gural: Faraldo “has no skin in the game”

I don’t know why I bother to respond to Faraldo because like Trump he has a cult following that thinks I am the bad guy and he is the good guy.

He leaves out the fact that if I did not step up at the last moment there would be no Meadowlands and when times were bad before sports betting I lent the company $18 million so that we could stay open and keep racing. I am still owed $13 million and do not expect to see that money any time soon.

I am also the only track owner that I know of who has put a portion of the sports betting profit into the purse account. This year over $4 million is going into the purse account from sport betting profits. I don’t think there is anything wrong with telling the drivers to follow the rules which clearly state that if you give a hole to a competitor you need to pull rather than sit in. The fact that the Judges choose not to enforce this rule is not my concern. I grew up in an era where the drivers would never give a competitor a hole and the racing was far more exciting.

As far as asking drivers to post online their opinion of the horses they are driving is no different than when we interview a driver in the paddock or on a TV show and ask him how he thinks the horses he is driving are going to race. Most of our simulcast customers are watching the races and not listening to sound so having this information prior to the start of the card could only help. We agree that anyone driving regularly at the Meadowlands should be able to take time off over the winter if they so choose to recharge their batteries but I don’t think it is unreasonable to come back by April 1.

We expect to lose $5 million on racing this year and I think it is not unfair to ask our drivers to help the handle and be back on April 1. Joe receives $50 million at Yonkers in purse subsidies and if we are lucky we receive about $6 million so obviously his purses are better and it is easier to make money racing at tracks that have slot subsidies but my guess is most horse owners would much rather race at the Meadowlands and hopefully actually watch in person and eat in Trotters as opposed to having a hot dog at Yonkers standing outside.

As far as the amateur races are concerned, the sad fact is that on a typical Friday we handle more on two amateur races than Yonkers does on the entire card. I don’t expect my comments to change anyone’s opinion, but it is hard to be constantly criticized by someone who unlike myself has no skin in the game.