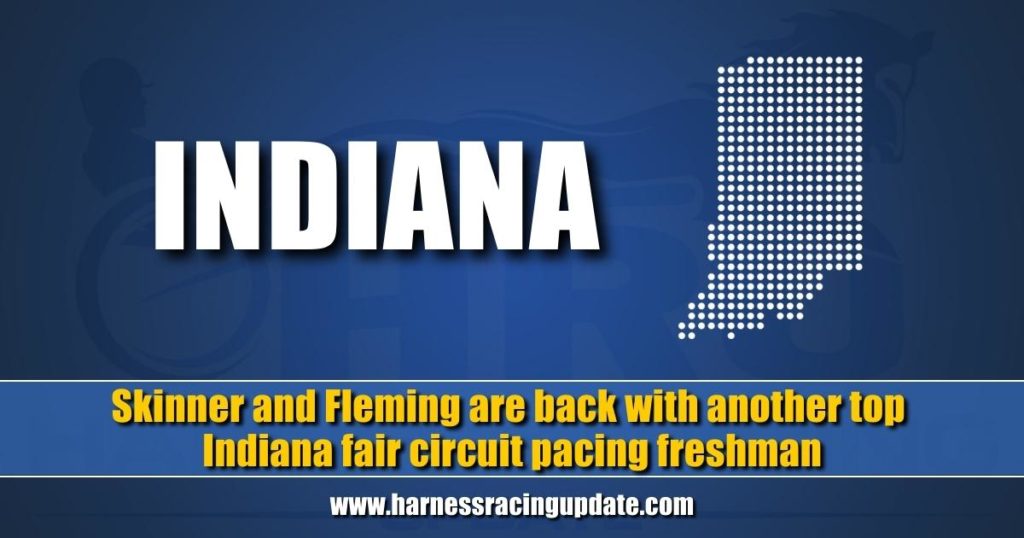 Last summer trainer Terry Skinner and owner Ar’tarrius Fleming competed on the Indiana fair circuit with pacing filly Rockin Bambi, capturing a Governor’s Cup championship and divisional honors with the 2-year-old. This year the two men have returned to the Hoosier State with another freshman and look to repeat their 2021 success. Master Splinter, a pacing colt, has turned in three impressive performances at the fairs, most recently wiring the field Tuesday, June 21 at Converse in a time of 2:00.1.

“We want to take the same kind of path we took with her,” Skinner said. “We’ll see how he handles it and we’ll go from there. It worked for her, so we wanted to try it again.”

Rockin Bambi kicked off her freshman campaign with four straight victories on the fair circuit. Skinner then shipped her to Hawthorne, where the filly picked up a win in her pari-mutuel debut. The connections dropped her into Indiana Sires Stakes for her next attempt and she finished out of the money. Returning to the fairs, Rockin Bambi continued her winning ways and qualified for the $25,000 Governor’s Cup final, which she won by four lengths. The Rockin Image filly finished the year with nine wins in 11 outings, with purse earnings of $26,290.

Similarly, Master Splinter is off to a fast start this season. An $8,500 purchase last fall at the Hoosier Classic sale, the Always A Virgin—Glass In The Sand colt has quickly separated himself from the competition. Qualifying at Oak Grove in late May, Skinner entered the 2-year-old in the second round of fair action at Converse on June 8. Master Splinter won that day despite broken equipment, nine and one-half lengths in front at the wire, tripping the timer in 1:58.4.

“I forgot to hook the shadow roll. When I got to the gate I realized it because it started flopping everywhere,” said Skinner, who steered the colt. “He didn’t pay it any mind and kept doing what he was doing.”

The pacer continued his dominance the next week at Corydon. Guided this time by Curtis Bradford, the colt opened up by 12 lengths in the stretch, eventually finishing just shy of 20 lengths ahead of the competition.

“I had to go to Springfield the day before. The time was so close together and I figured I wouldn’t get back in time to go to Corydon,” said Skinner. “Curtis has been helping me in the barn jogging and training. I told him I’m going to put this horse in to race and you can go drive him. It worked out perfectly.”

This week, Master Splinter rolled out of the turn comfortably in front and finished six and one-half lengths to the good. On Indiana’s fair circuit, a horse has to accumulate enough points to finish in the top eight within a division to qualify for the Governor’s Cup championship, and make a minimum of seven starts. With three wins collected after four weeks, Skinner wants to have the flexibility to try his colt in Indiana Sires Stakes action when it kicks off July 14 at Harrah’s Hoosier Park Racing and Casino.

“You’ve got to have seven starts to get to the fair finals. I wanted to at least get halfway there before the sires stakes started,” the trainer said. “We did want to try him on the big track just to see how he would adapt to it. If he isn’t good enough to compete, we won’t have to run so much in order to get those starts for the fair final.”

Rockin Bambi was not successful in her sires stakes attempt last season, but perhaps Master Splinter can be competitive in the state’s top program. He has already shown he is one of the stars of the fair circuit and a model horse around the barn area.

“He’s pretty easy to be around. He’ll holler every now and then to let you know he’s in the barn, but he doesn’t try to hurt you. He’s pretty well mannered, easy to get along with, easy to jog, easy to put the equipment on. He doesn’t do anything wrong,” Skinner said of his pupil.

The trainer is also enjoying a high level of success at the moment. The Mississippi native has sent out nine winners from 27 starters this season, with a UTRS of .424. Last year, his 52 starters earned $56,521 in purses, a personal best. To date, his stable has banked $45,424 in 2022 and is on course to set new standards for the conditioner.

Now a sophomore, Rockin Bambi has made four starts at Oak Grove, winning twice and finishing second once while taking a mark of 1:53.2. Last week, Skinner guided freshman World Of Rocknroll filly Rags To Riches to a five-length score at Springfield. He owns the 1:58.4 winner. Skinner also co-owns 2-year-old pacing colt Ifudntnomebynow, three-for-three this season. The Indiana-sired pacer is dual eligible, collecting his wins in the Bluegrass State.

“They all trained down pretty good. They did it so easy, I figured they would be halfway decent to try to race this summer. We just put them in and try to get them prepared and go racing,” commented Skinner, who is based in Fayetteville, Tennessee and shipping to Kentucky, Indiana and Illinois to race each week.

Skinner’s grandfather, Henry Minor, trained horses and nurtured an early interest in racing. He also learned the business from his cousin, Curtis Rice, who shared pointers with the young horseman as he helped train. Skinner will turn 34 next week, and he has high aspirations for his career in racing.

“I want to be able to compete on the big stage one day. I’m just taking it one day at a time, trying to get better every year and be more competitive every year,” he said.