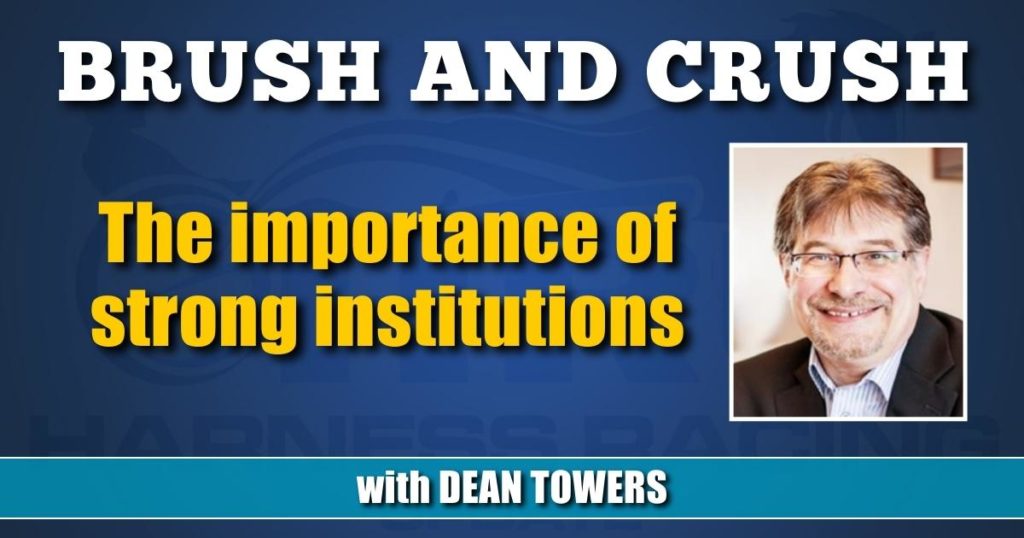 The importance of strong institutions

The Horseracing Integrity and Safety Authority might have its issues, but it’s what we’ve got.

If you’ve been following professional golf, you’ve no doubt noticed the fight between the PGA Tour and the Greg Norman-Phil Mickelson, Saudi backed, LIV Golf Tour.

Thus far, the fight itself hasn’t been fair.

If you flip on a broadcast, read print media, or peruse twitter, the PGA Tour is the white-hatted lawman on the hill standing up for all what’s right in the world, and Phil Mickelson and Greg Norman are bandits in the valley, ready to pillage a stagecoach filled with women and children. This is like Charles Oliveira versus Tim Tetrick, not on a racetrack, but in the ring.

The PGA Tour, along with its partners – media, broadcast rights companies, feeder leagues, corporate America and numerous charities – is an extremely strong institution. And strong entities have tremendous power.

These types of institutions are a building block for creating success, whether in golf, or in history.

In the late 1700’s, we all know the Industrial Revolution began in England. Why this new way of doing things took place in England and not in other rich and vibrant countries like Holland or Spain is a question that economists have been studying for many years.

They believe one of the major reasons England was home to massive innovation, was due to their institutions. Private property rights were respected by a rule of law, innovations were protected and diffused freely, a strong educational system fed the funnels, and organizations like the Royal Society were incubators that allowed science to flourish.

Frankly, this has been a feature in almost everything that grows.

In harness racing it’s no secret we’ve never had such a structure. If we had a nickel for the times we’ve heard the sport clamouring for a commissioner, we’d have enough nickels to fund the next 50 Hambletonians.

What we have had – state commissions, the USTA, Hambletonian Society, horsepeople groups – have certainly not done poorly. Particularly, in terms of forwarding the rent-seeking behavior of our sport (for example, slots), I think they’ve been effective, and this demands praise. But bringing people together like a PGA Tour or 1800 England? It just simply has not been in their wheelhouse. And that’s been, in my view, one of this sport’s biggest problems.

This is a sport where the owner of the highest handle track in the world has to send email and text blasts to get entries. It’s where those seeking uniform rules are met with quizzical stares. It’s where the same group of buyers attend yearling sales, buying horses to be trained by the same half-dozen people. It’s an entity where it seems there are a dozen PGA Tours fighting each other; sometimes for what purpose, we do not know.

What sport with strong institutional power – pick one – would allow any of that to happen?

There’s some strong negative opinion on HISA, and I hear it loud and clear. In fact, I agree with some of it. But what HISA does have going for it may be necessary for a sport devoid of national, institutional leadership.

I think that’s why many people — in shedrows, on these pages, or in grandstands — want to give it a chance. No one else has stepped up to the plate who can take charge; to address things that an MLB or NHL or PGA Tour would’ve long addressed. This sport is begging for institutional leadership, and white hat or black hat, on a hill or in the valley, they’re the only one standing.