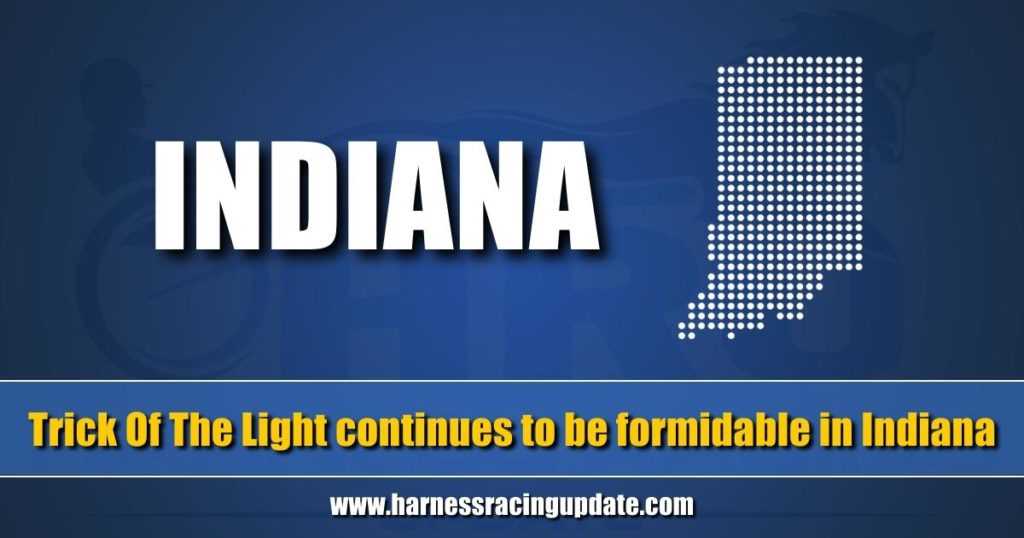 Trick Of The Light continues to be formidable in Indiana

The sophomore pacing filly is two-for-two for trainer Brian Brown.

Two rounds of Indiana Sires Stakes for sophomore pacing fillies are now in the books at Harrah’s Hoosier Park Racing & Casino, and the early returns show Trick Of The Light, last year’s Super Final winner at 2, is again a formidable opponent. Trained by Brian Brown, the Odds On Equuleus—Gordjus lass secured her second stakes win Thursday (June 9), pacing to victory in a career best 1:50 in her $49,000 division.

“I don’t know what I can say other than she’s just tough. She loves to race and gives you her best every time,” said Brown.

In the opening leg of sires stakes competition, held on Memorial Day, Trick Of The Light captured her respective $34,500 split with Hoosier Park leading driver Trace Tetrick in the bike. The duo received every call and held off Jk’s Rollin Baby by a head in 1:50.3. By comparison, Always Gonna B You scored a 1:49.4 triumph in another division that day. After the race, Brown discovered his charge was not at her best despite the winning effort.

“She even tied up a little bit in the last start and still won. Then we changed her routine this week and the mare apparently didn’t tie up last night,” he said Friday afternoon. “She was really, really good.”

A $50,000 Hoosier Classic yearling purchase for the Buckeye State partnership of Country Club Acres Inc., Joe Sbrocco and Kirk Nichols, the filly is out of a Dragon Again mare that has proven to be quite productive in a short period of time. Trick Of The Light is a half-sister to six-figure earners Kak’s Rockin p,5, 1:51.4s ($113,839) and JK She’s Gordjus p,3, 1:52.1s ($105,882). The filly is from the first crop of Art Major stallion Odds On Equuleus, one of 19 registered foals, and the most successful to date.

“We’re never afraid to buy a first year stallion, so we kind of liked that. We’ve had good luck buying Dragon Again broodmares. She was just a nice looking filly that had a lot of length to her. She’s not real tall, but well-made and doesn’t wear a boot. She had a decent family behind her, and we just liked her when we saw her,” Brown said. “I think that if Odds On Equuleus would have had the numbers, you’d be reading a lot more about him.”

Trick Of The Light did her part to promote the sire in 2021. Bred by Adam Eicher, the filly hit the board in six of nine attempts, registering three wins and three runner-up finishes. The pacer reached the wire first in another contest last season before being disqualified by judges for interference. In claiming last fall’s $270,000 Super Final, she closed the campaign with $227,250 in earnings while taking a 1:51.1 mark.

“She wintered really good. She’s an easy keeper. There’s really nothing that this filly does wrong. She trained down good,” said the conditioner. “We weren’t in a hurry since Indiana doesn’t start until later in May with the first sires stakes. We just came along a little easier, got the two qualifiers and two starts in before sires stakes started. Other than once in a while tying up, there’s no blips to her. She just goes out and races.”

Brown said that he could have sent the sophomore straight into sires stakes action off two qualifying efforts, but he wanted to give her two starts leading up to Memorial Day to ensure she was ready for battle. Trick Of The Light won her seasonal debut in 1:51.4 and raced second a week later in 1:50.3.

Memorial Day issues aside, Thursday evening the 3-year-old turned in a dominating performance in the night’s 11th race. Starting from the rail, Tetrick settled in third with the favorite through a :26.4 opening panel before moving her to the top on the backstretch. Establishing a two-length advantage over the field, Trick Of The Light set the fractions and opened up by three and one-quarter lengths at the wire, kicking home in :26.4.

“I would say she is ahead of what I thought our schedule would be. I didn’t think we’d be going in :50 in the second leg of the sire stake. The other division went in 49.4 two starts back. That’s pretty unbelievable,” Brown said. “Hoosier Park is lightning fast, but it still takes a pretty good horse to go around there in :50 or better.”

The primary objective may be Indiana Sires Stakes, however Trick Of The Light’s connections will give her a chance to showcase her abilities on the Grand Circuit this summer and fall. Brown said that the filly is eligible to the Nadia Lobell and Pegasus at Hoosier Park, but she is also staked to the Mistletoe Shalee, James Lynch Memorial, Jugette, Glen Garnsey Memorial and Breeders Crown. Should Trick Of The Light make each engagement, the filly will have a challenging schedule outside the Hoosier State to complement her in-state slate.

“We have a lot of confidence in her. I don’t like going out of state too much with these. I don’t want to get them beat up before the sires stakes final,” said Brown. “But this filly has been so good and has such a good attitude, that we decided to go ahead and give her a shot.”