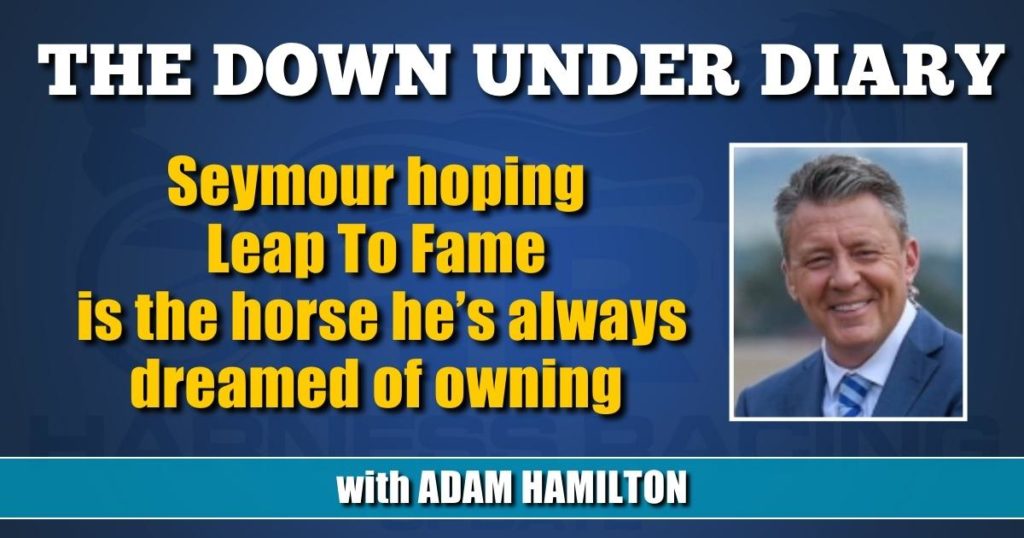 After more than 40 years of strong and passionate involvement across so many levels of harness racing, Kevin and his wife, Kay – deep in their twilight years – have found the horse they have been dreaming of.

And that dream could carry them across to North America in the next couple of years.

The horse is the exceptionally talented Leap To Fame, a son of Bettors Delight, who has won 11 of his 14 starts and stamped himself as potentially Down Under’s “next big thing” by blitzing his rivals in the Group 1 NSW Derby at his most recent start back in February.

In the days after his imperious win, offers of $A1 million or more came flooding in for Leap To Fame.

Seymour, a billionaire businessman, said he and Kay “entertained” selling, but in reality Leap To Fame was and is going nowhere.

“We’ve waited a lifetime in harness racing for a horse like this. We’ve had some lovely horses, but he could be our first champion. He’s got everything you look for in a horse,” Seymour said.

Leap To Fame’s credentials will soon be further tested when, in his and the Seymours’ own backyard of Queensland, he tackles upcoming feature races like the Group 1 Rising Sun (July 9) and Group 1 Queensland Derby after that.

It is the Rising Sun that has everybody talking. In just its second year, the race is restricted to 3 and 4-year-old pacers with the 3-year-olds (like Leap To Fame) getting the advantage of a preferential barrier draw.

“I don’t think the Derbys are a concern, but this Rising Sun, against the 4-year-olds, will be quite a test at this stage of his career,” Seymour said.

Longer term, Leap To Fame’s value has also been enhanced by the unveiling of the world’s richest race, the $A2.1 million Eureka, to be run in Sydney on Sept. 2, next year. Like the Rising Sun, it is also restricted to 3- and 4-year-old pacers, but they must also be bred in Australia.

It’s perfect timing for Leap To Fame, who is an Aussie-bred and will be deep into his 4-year-old season and arguably at the peak of his powers.

“That certainly made it easier not to sell,” Seymour said. “He’s the sort of horse who could be a $A3-4 million money earner.

“It’s all about managing him well and looking after him now to maximize his potential. That’s where Grant Dixon (trainer/driver) is so great. He’s got a track record for doing that.”

Seymour is certainly no stranger to major races, having already bred and/or raced topliners in Colt Thirty One (48 wins and over $A1 million), Majestic Mach (35 wins and over $A800,000 and, of course, he was a big part of the group who bought Mr Feelgood from the US and enjoyed huge success.

Mr Feelgood won two of Down Under’s biggest races in 2009, the Inter Dominion final and the Hunter Cup. He retired with 39 wins and almost $3.4 million in the bank.

So much of Seymour’s success stems from his foundation mare, Call Girl, a Tempest Hanover mare he bought from New Zealand in 1982. She became the matriarch of a pacing dynasty, of which Colt Thirty One and so many of Seymour’s other pacing stars are part of.

“I bought two foundation mares, Call Girl was the first and Mistron the second. You couldn’t have picked two better mares as it turned out,” he said.

Majestic Mach and so many other stars have stemmed from the Mistron line.

Most of them were born and raised at the Seymours’ Egmont Stud, which shot to prominence through the stunning success of stallion Fake Left, who had such a remarkable impact, especially in Australia.

While Egmont Park has been scaled right back these days, the Seymours still have a hunger for success.

“How lucky are we to have Leap To Fame come along at this stage of our lives,” Kevin Seymour said. “He could take us on quite a ride over the next few years.”

Seymour is open in saying his wish is for that ride to include a racing stint in the US.

“What a thing that would be. If he keeps developing and is as good as we hope, to take him over and do Australia proud,” he said.

“We haven’t just talked about it, we’ve thought about it. Logically, going when he’s five (early 2024) would be the time.

“It’s always been an ambition of mine to do a Mr Feelgood in reverse. He did great things in North America and then came here (Australia) and won just about every big race that matters.

“I’d love to win the big races here and then take Leap To Fame across to the States for their biggest races before we bring him home and stand him at stud. He’s got enormous stud value being a Bettors Delight out of a really good family.”

Seymour knows there will be those who laugh at his “plan”, but he’s not fazed.

“Oh, I’m used to that, whether it be in business or with the horses,” he said.

“I remember when we bought Mr Feelgood to come here and race, everyone knocked us. They said he was a speedy squib and wouldn’t handle the longer races. He won our two biggest staying races.

“We’ve got plenty to chase here for now, but Kay and I would absolutely love to take Leap To Fame across to fly the Aussie flag if he’s as good as we think he’s going to be.”