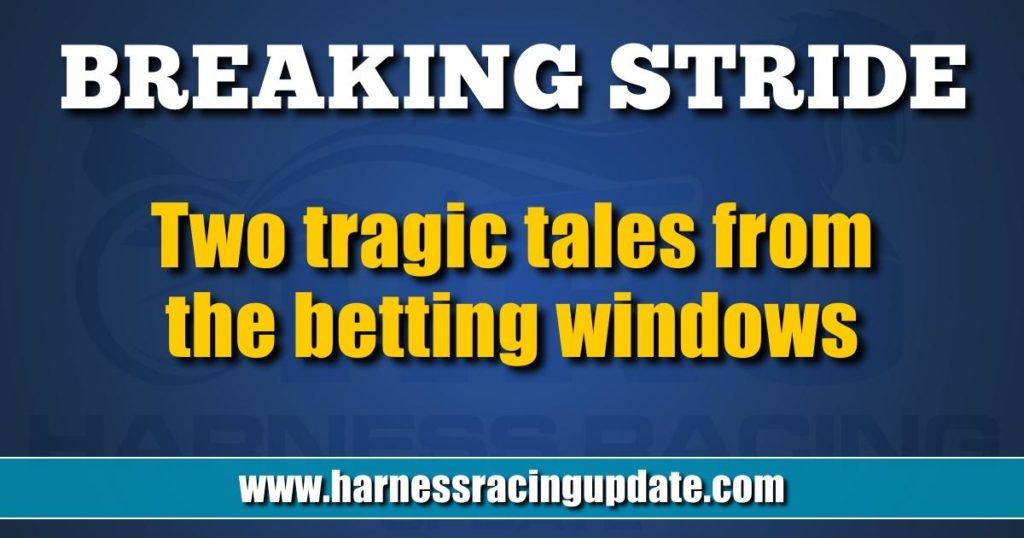 Once upon a time, I was a proud member of a group of racetrack slackers who populated the harness track grandstands. We set up shop on a trio of tables on the lower concourse near the glass doors that opened to the apron where the trotters and pacers turned for the home stretch.

A freewheeling group prone to taunting, laughing, and boasting, this was our social life. These were different times. We gambled against the other folks attending the races at the racetrack and sported cigarettes, paper tickets, paper programs, and a dash of misogyny. A few of the guys, New York Mork and Perfecta Phil, were very good handicappers and prone to smirk at lesser horseracing handicapping minds.

Two of those lesser minds were Wally the Weasel and me, two of the worst and loudest handicappers of the bunch. Everyone in our motley crew understood who was excellent at handicapping and who was not because we bellowed our prerace pronouncements with enormous confidence. We also made our post-race laments with great grievance and blame.

How bad was I at handicapping? One of my claims to the poor horseracing wagering hall of shame was the day I lost money on a race and, less than five minutes later, lost money on the latest racing innovation, the simulcast replay.

After the race under discussion, I asked anyone and everyone, “How could the six come home last? It’s impossible.”

This comment irritated me, “He was last. I watched his every step.”

The situation escalated and resulted in Mork taunting me with, “Ten bucks say the number six wasn’t last.”

We stomped through the glass doors to a large television screen to settle the matter with a small posse in our wake.

I told you Mork was sharp. Unseen by me was the nine, the trailer in the field. The driver of the nine horse mistimed the starting gate by about an eighth of a mile. Sure enough, long after my horse finished, the nine pranced across the screen. I swear the nag was smirking, as was Mork, when I forked over the ten bucks.

Worse, or better, depending on your perspective, was “The Case of the Gagging Weasel.”

Prerace, Weasel bellowed, “I got a cold trifecta, eight, seven, six. Watch it and weep, suckers.”

The sequence of numbers in his wager was unusual, as was Weasel in his porkpie hat and black high-top Keds. Most of us glanced at the tote board and saw that all of Weasel’s horses were bombs. We rolled our eyes. Along with Weasel, we moseyed up to the wire fence near the finish line to watch the race, our standard practice.

As the horses approached the starting car, Weasel reiterated his wager by shouting, “Eight, seven, six, just like the countdown to a rocket launch. Book it, baby!”

Like a dream come true, the horses turned toward the finish line, eight, seven, six, well ahead of the pack, well-spaced, none of the three horses gaining or losing an inch. Weasel was screaming, “Oh, Oh, Oh, Oh,” like a woman giving birth to a large child. Suddenly, deep in the home stretch, like a rocket ship out of the clouds, the number one horse exploded on the tiring trio and passed all three in the last few feet. The tote board displayed 1-8-7-6.

Weasel let out a primal, guttural scream, a sound that still echoes in our ears decades later. All eyes latched on to the face of the wounded Weasel, staring at the tortured man with a single ticked pinched between his thumb and index finger.

We were watching when, and this is not a joke, Weasel took his single trifecta ticket and slipped it into his mouth like a potato chip.

Weasel was glassy-eyed, chewing and swallowing, when the announcer intoned, “Hold all tickets.” The number one on the tote board flashed red, a prelude to the disqualification of the number one horse for violation of the breaking rule in the first turn. The red words “official” flashed when the remnants of his ticket were near his thorax, perhaps trachea. The 8-7-6 payoff was $4,410.

I whispered to Mork, asking if the Heimlich maneuver was possible. Mork shook his head and began to describe various teeth and the processes of mastication and digestion.

Mork and Downtown Danny each took an elbow of the mumbling, catatonic Weasel and escorted him back to his chair in the concourse. We took turns sitting next to him for the rest of the program, sort of a suicide watch. NOBODY had the heart to tease or joke. This remarkable tale will endure throughout wagering history.

The plunging attendance of patrons who physically attend the racetrack grandstands has slowed to a trickle. Modern gamblers wager from home on devices. Ease and comfort have arrived at the expense of friendship and socializing.

And Weasel? He recovered, but we still did not mention the swallowed ticket. A year after the incident, he moved to a condo in North Carolina, a state that does not even allow internet wagering. The racing gang moved away from the grandstands into the real world. Me? I still play the trotters and pacers on my laptop, no teasing, nobody tracking my lousy wagers, no testosterone flowing, no ticket swallowing. Sad.