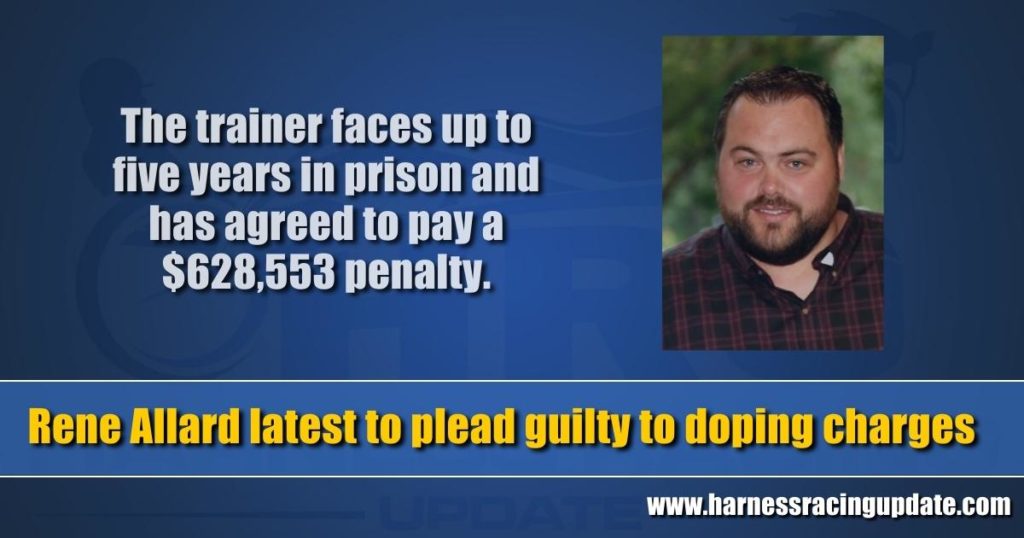 The trainer faces up to five years in prison and has agreed to pay a $628,553 penalty.

Harness trainer Rene Allard, among the more than two dozen individuals indicted in March, 2020 as part of a conspiracy to dope race horses, changed his plea to guilty on one felony count of drug adulteration and misbranding on Thursday (June 2). He had been scheduled to go to trial on June 27.

Allard will be sentenced on Sept. 13 and faces up to five years in prison. In addition to the prison sentence, Allard also agreed to pay a $628,553 penalty.

The indictment in which Allard was charged included five others with ties to the harness racing industry. Louis Grasso, Donato Poliseno, Thomas Guido III and Richard Banca have also entered guilty pleas. Conor Flynn, a former assistant to Banca, has been cooperating with the government and testified against Lisa Giannelli. Giannelli, who worked with convicted drug distributer Seth Fishman, took her case to trial and was found guilty on charges of drug misbranding and alteration.

With Allard having entered a guilty plea, it appears that all of the doping cases involving those who were involved in standardbred racing, have been settled. Gregory Skelton, Ross Cohen, Nick Surick and Chris Marino were among those originally indicted but their names were not included when the government issued a superseding indictment.

The high-profile thoroughbred trainer Jason Servis is among the few who continue to fight the charges against them. Servis’ trial is set for January.

The evidence against Allard included stomach-churning wiretaps in which jokes were made about the deaths of several horses trained by Allard. The FBI intercepted a phone conversation between Cohen and Grasso discussing the deaths of horses who were given illegal drugs by Allard. It reads (exactly):

Grasso: (Laughter) well I didn’t get anymore emergency calls yesterday so I am assuming…

Cohen. Jeez. What were you thinking?

The pair continue to discuss the situation before wrapping up:

Cohen: Holy f–k did they do an autopsy?

The original indictment involving Allard also included testimony from FBI agent Bruce Turpin. Turpin stated that Allard stabled at a training center run by Banca in Middletown, NY and that his barn was raided on or about March 9, 2020. There, they found multiple empty syringes, the drug Glycopyrrolate, epinephrine and vials labeled “Thymosine Beta” and “for research purposes only.”

The March, 2020 indictment was far from the first time Allard had found himself in trouble. In 2017, a horse Allard trained tested positive for Codeine and Morphine — both Class 1 drugs — following a race at Woodbine. In 2016, the Allard-trained horse Julerica tested positive for the Class 1 drug Oxycodone at Mohegan Sun at Pocono Downs.

In a related development, the convicted doper Chris Oakes has begun serving his three-year sentence for drug alteration and misbranding. Oakes has been sent to the federal prison USP Lewisburg, a medium-security facility in Kelly Township, PA.

Lewisburg has been the home to many high-profile inmates. The list includes John Gotti, Whitey Bulger and Jimmy Hoffa.