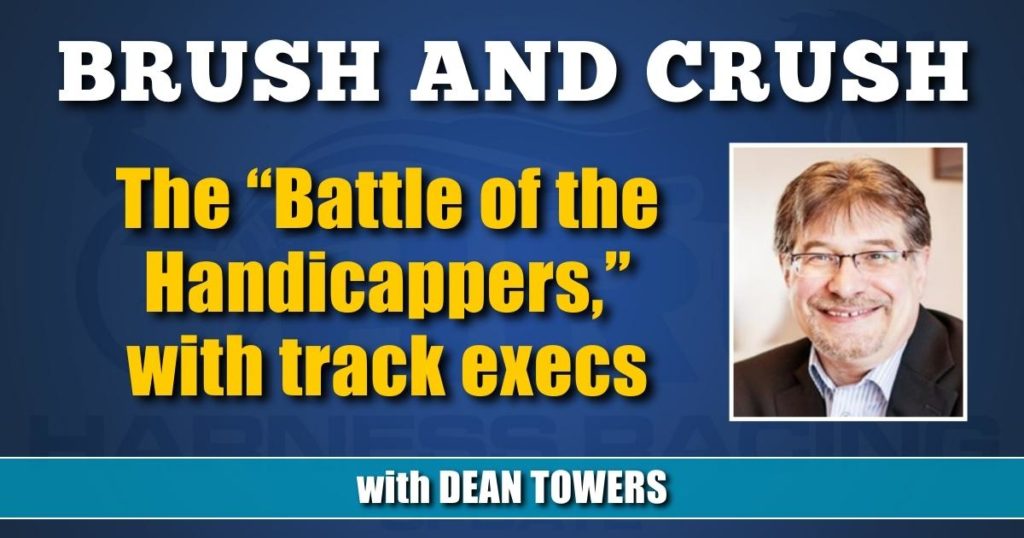 The “Battle of the Handicappers,” with track execs

Putting on a hard-hat can open a lot of eyes, and maybe force some change.

This week, it was announced that the assembled Meadowlands handicapping talent will do battle in an “ultimate handicapping contest” for various charities. These ideas are always fun, and I wish each and every one good luck for their charity.

But if I had my way, I’d offer a twist on this contest. I’d make the participants not track handicappers, but track executives.

Yes, each and every one of them – we can even add some thoroughbred or horsepeople group heavy hitters – get a bankroll of $10,000 and have to play every race on a Friday and Saturday for a summer.

I think what they’d learn by doing what we do on a daily basis would be a more important education than any industry conference, Racetrack Industry Program course, or Zoom meeting ever could.

They’d probably be a little steamed about Test Of Faith pulling back to last at 1-9 on a speed track, wouldn’t they; perhaps even enough to text Jeff Gural.

“How is that fair Jeff? I keyed her in the Pick 4 and she was the best horse by a mile!”

They might text Nick Salvi and ask why the drivers were half-in and half-out waiting for cover in the 5th, and before anyone moved the race was over.

“It’s against the rules, right Nick? Where are the judges?”

They might contact Mike Tanner asking how a horse off 45 days won in 1:50 by four at 10-1 without having to qualify.

“I think we changed the qualifying rule at the behest of horsepeople Mike, but I was alive to five horses for a score in that Pick 5. How are we supposed to know that horse schooled in 1:54 last week?”

They might hit a Pick 3 at Northfield from Canada, and be left with $100 less on a payout because of the Woodbine Winners’ Tax.

“Isn’t this game supposed to be pari-mutuel? What in the hell is going on?”

At the end of the period, when not one of them has any money left (despite hitting plenty of winners), they might get their most important lesson – the phenomenon we call ‘High Takeout.’

My father worked in heavy industry, and his first job was bringing timber underground to support the rock walls so mining could take place (somewhat) safely. But he worked hard, took courses at night and many years later was running a lot of the place.

One morning when I was working my summer job at the mine, I saw him walking the property dressed like I was, with steel-toed boots, coveralls, and a hard hat. He said the boys in the mill were complaining about a process so he was going to work a shift to see what was going on. When he came home that night, he told me that yes, there were some problems that needed to be addressed.

I’ve always taken that as an important life lesson in business.

Perhaps it can be as simple as ditching the jacket and tie for a hard hat and a pair of boots. Maybe, maybe not. But, does anyone want to give my handicapping contest a try to see if we can find out?