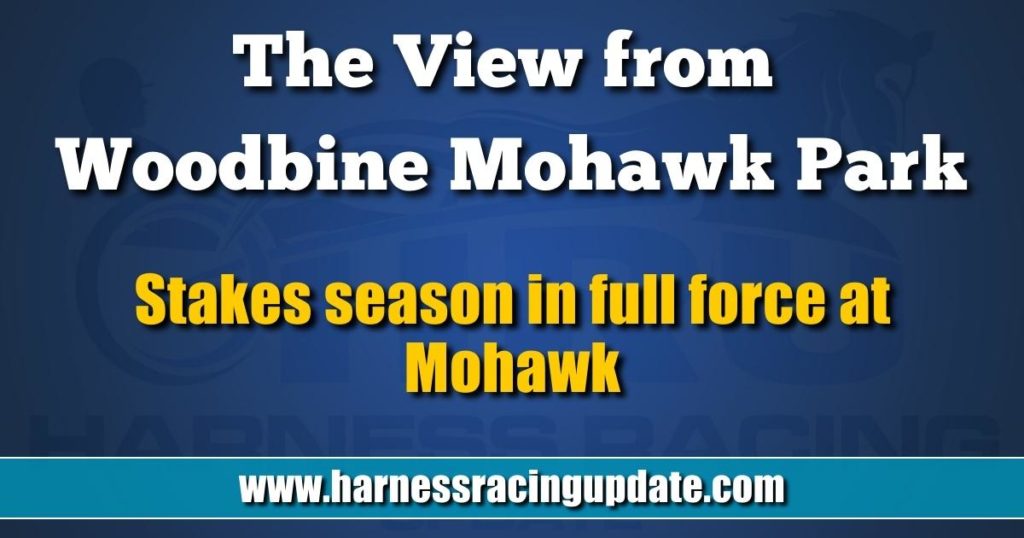 After a Saturday (May 28) night of double-digit winners, Woodbine Mohawk Park began the Monday, May 30 card with a Pick 5 carryover of $65,885 (Canadian). Perhaps unsurprisingly, no one hit Saturday’s late Pick 5: race 6-10 winners were comprised of 24-1 Lux Seelster, 23-1 Twin B Heart Throb, 3-5 favorite Stonebridge Helios, 17-1 Highlandbeachsbest, and 15-1 Hervey Hanover.

Between longshots, Stonebridge Helios fulfilled the promise of his May 13 Standardbred Breeders of Ontario Association elimination victory with another, in the rescheduled $122,600 (Canadian) SBOA final for 3-year-old pacing colts and geldings. But for much of the mile, 39-1 Macho Phil (Travis Cullen) gave the impression that another underdog might prevail.

Macho Phil led to the opening quarter in :26, keeping ahead of Bob Loblaw (Sylvain Filion) at the :54.4 half, with Stonebridge Helios (Bob McClure) trailing all but two early breakers. Macho Phil’s advantage dissolved in what announcer Ken Middleton termed “a mad scramble to the finish.” Widest of all down the stretch, Stonebridge Helios’ :26.3 last quarter carried him past fellow closers Sport Secret and Chucky Hanover in a 1:50.3 personal best, which equalled Bob Loblaw’s mark for fastest 2022 Canadian win by a sophomore male pacer.

Stonebridge Helios (Sunshine Beach—Ken Doll J) is conditioned by John Pentland of London, ON, who shares ownership with John Fleischman of Ottawa, ON, and breeder Angie Stiller of Arva, ON. Original plans were for the lightly-raced colt’s next race to be a Somebeachsomewhere stake division, scheduled for June 4 at Mohawk. His earnings have now reached $369,510 (Cdn) over nine career starts.

“I don’t know how much he improved [from year to year],” said trainer Pentland after Stonebridge Helios’ latest victory. “He was a big, strong colt last year and he was a good colt last year. I was lucky – he doesn’t have a lot of problems, and he loves to race, and I think that’s the main thing about him… He wasn’t great tonight. He wasn’t at his best. But it’s five weeks in a row he’s gotta go and it’s tough, so we’re aiming for the [North America] Cup and that’s what we want.”

The lifetime-best victory was Duly Resolved’s first in three tries this year. The Resolve gelding (out of Motown Muscle by Muscle Mass) is owned by Bax Stable of Campbellville, ON; David Hudson, of Dallas, TX; Don Allensen of Wyoming, ON; and Gaelic Stable of Sharon, ON. After the win, trainer John Bax remarked, “Nobody gave him any grief, so that was the way it was supposed to happen.”

Unlike Duly Resolved, Twin B Archie’s lead was swiftly under threat: Three Finger Pour gave chase on the final turn, followed by second-over Esplosione, who tipped three-wide for the stretch drive. Jamieson’s gelding unleashed a :27.1 last quarter that closed the four-length gap between himself and Twin B Archie in a perfectly-timed late move. The 1:53.4s neck-margin revenge was a new mark for Esplosione; he finished second to Twin B Archie in their May 13 SBOA elim and the non-wagering SBOA final, contested May 23 before the regular Monday card.

Esplosione (Kadabra—Dynamite Dame) is trained by Meg Crone for owners Mel Hartman of Ottawa, ON and Enzed Racing Stable of Allentown, New Jersey. Recent catch driver Jody Jamieson praised the gelding’s sensible mindset and late speed: “Last week, he was just a total professional. I got away close to last, just stayed on the rail, and you know, I had to stop him and start him a couple of times. It really showed me that he was very versatile. Tonight, it worked out great. I got to settle right in behind James [MacDonald], which I thought was going to be good until he left to go to the lead [with Twin B Archie]. I still got a second-over trip, and he fired so hard down the stretch, he was just not gonna get beat tonight.”