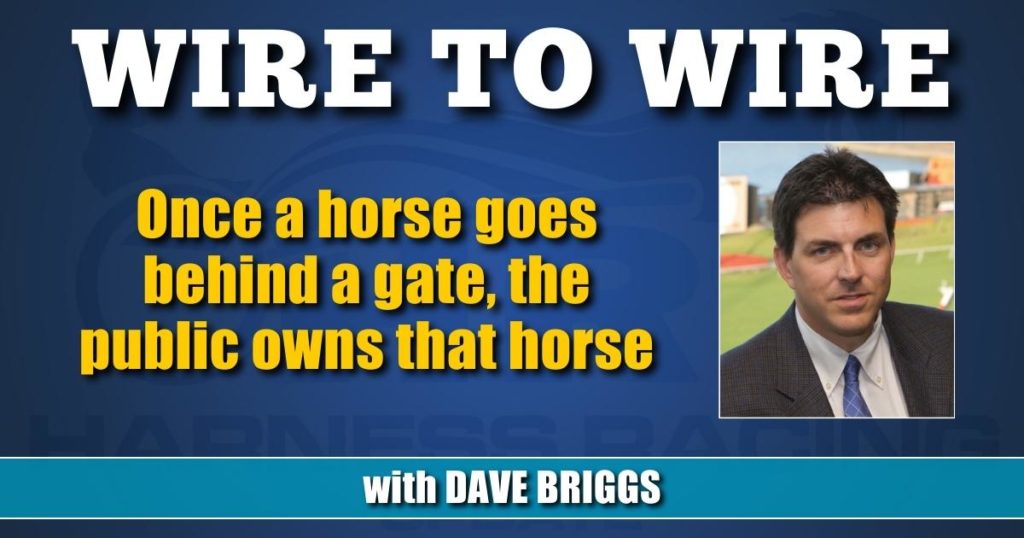 Once a horse goes behind the gate, the public owns that horse

In the push and pull between the best interests of participants and bettors, never forget it’s a gambling game and the gamblers fund the vast majority of the non-stakes purses that the owners, trainers and drivers win. The sport’s survival depends on bettors being top of mind more often and racing officials doing their jobs.

I am neither a bettor nor a horse owner (though, one day, I’d like to be the latter), but I’ve been around both long enough to form pretty strong opinions about who is right in the latest donnybrook pitting the best interest of harness racing gamblers versus the participants.

At the end of his column in Friday’s HRU, Brett Sturman said it was “inexcusable” that reigning Horse of the Year Test Of Faith went off at 1-9 last Saturday in a fillies and mares open at The Meadowlands and was “inexplicably taken back to last in a field of six, (where) all she could do was close belatedly to just get up for second.” Don’t forget this was her third pari-mutuel start of the year — coming off a 1:49.4 win in the Graduate — not her first start of 2022 where an easier trip should be expected by handicappers.

Sturman’s main point was, basically, just put her in play or, at the very least, be a little more aggressive.

This isn’t really about that race in particular and I’m not in the least suggesting anything nefarious happened. Rather, Sturman’s column spawned an interesting online debate about the broader issue of where drivers’ strongest motivations should be in the equation — to the bettors or the owners/trainer.

I agree with Sturman on this one because it goes back to an old horseman’s adage more people would do well to remember:

Once a horse goes behind the gate, the public owns that horse.

Yes, horse owners are extremely important in the equation. We need more of them. Yes, the horse is the owner(s)’ very expensive asset.

But it’s a gambling game.

Never forget it is the gamblers — whether directly through the pari-mutuel system or indirectly by betting in racinos that give a cut to racing — that fund the vast majority of the non-stakes purses that the owners, drivers and trainers win.

Yet, all too often, the bettors are forgotten in the equation — or worse, treated as deplorables — imperilling the entire operation. Bettors are the sport’s lifeblood, but it’s clear they are heading toward extinction. Not getting a fair shake is a big part of the reason.

Yes, stakes races — which the above example was not — offer a slightly different loyalty conundrum since they are mostly funded by the owners, but it still doesn’t change the fact those races are bet on and drivers need to be even more conscious of that to protect the public the sports needs to survive.

I stress this does not in any way mean horses should be gutted just to satisfy the bettors.

Owners should more often accept their horses will be “owned” by the public when they race. But gamblers need to more often accept that a horse might not be able to perform up to form on a given night. The health of the horse should always be tantamount.

But there is also a very easy way to protect the betting public if it’s clear a horse isn’t in the best shape to race up to the conditions before going to the gate — scratch.

That best protects the owner(s)’ investment, as well. It simply needs to happen more often.

I also recognize drivers often have a tough gig. They are caught between doing what’s right for the horse, themselves, the people they drive for and the betting public. All can be competing interests.

They also are human and make mistakes as surely as we all do — myself, most definitely, included.

Also, I’ve never driven a horse and I’m not going to tell drivers how to do so.

But what I’m talking about isn’t how to drive, specifically, but the broader issue of where the driver’s priorities should be once the gate rolls.

That means doing what’s best for the bettors — within reason, of course — so long as it doesn’t imperil the health of the horses or the drivers.

Yet, I honestly believe doing what’s best for the punters is rarely a prime guiding force. Realistically, drivers are much more beholden to trainers and owners than the betting public. But once behind the gate, that’s what needs to change if the game ever hopes to survive.

While I’m not going to start critiquing drives, that’s exactly what racing commission officials are paid to do to protect the public and the horses. It is incumbent on them to act consistently and decisively every time — and lord knows that rarely happens.

A lot of the blame falls to them.

If officials were vigilant about enforcing the racing rules, this column wouldn’t be necessary.

If, in their professional opinion, a drive isn’t adequate, they have the power to penalize.

Finally, a small side note. Please spare me the argument that it was dumb to bet on Test Of Faith at 1-9 and people that make dumb bets don’t deserve to cash them. Whether she should have been 1-9 is completely irrelevant. That’s what bettors decided she was and to paraphrase that old horseman’s adage: drive accordingly.

And to be fair, the reigning Horse of the Year in a six-horse field in her third start, coming off a 1:49.4 victory, should be well bet. Bettors should expect her to at least be in more in play than she was. That’s not false bettor hysteria or dumb betting even though 1-9 is always a stretch.

Other than keeping bettors top of mind more often, and better appreciating the gamblers that fund much of the operation, I’m not sure how to solve that one.

I just know that unless these competing interests figure out how to row in the same direction we are doomed to be sucked into the whirlpool.