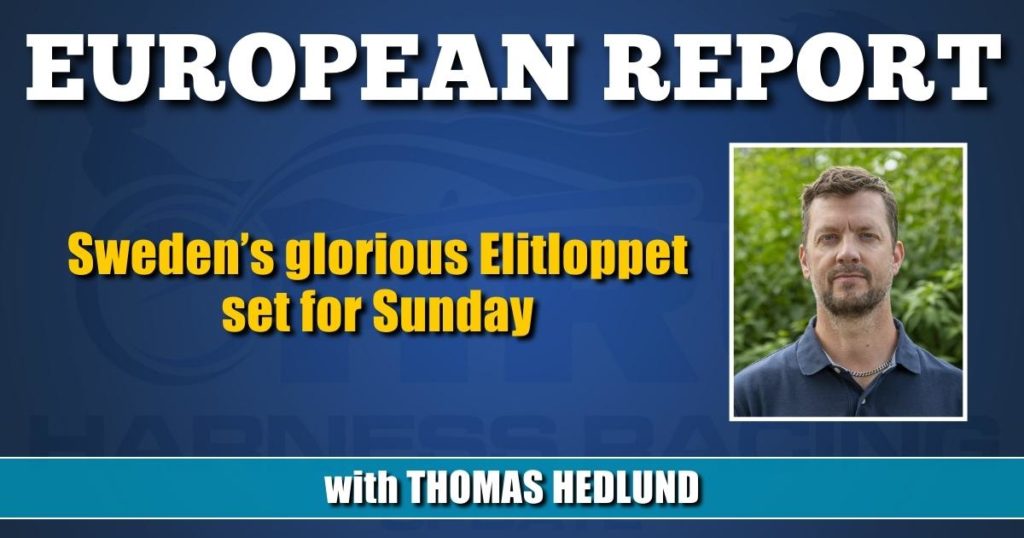 For the first time in three years, spectators will be allowed at Solvalla to witness one of the greatest trotting races in the world.

After two years of a global pandemic, harness racing fans are allowed to return to Solvalla this weekend for one of the greatest racing days in the world.

The $1,015,000 Elitloppet, to be contested on Sunday (May 29), is shaping up as spectacular as ever with 15 contenders chasing their spot in the final.

The draw, which was conducted on Sunday (May 22) afternoon and broadcast on Swedish television, leaves Elitloppet 2022 a very open affair.

The experience of Elitloppet weekend is very much about the weather and the total atmosphere around the track. As of Wednesday, Sunday was shaping up to be a wet event, just like 2019, the last time Solvalla opened its gates to spectators.

Besides possibly bad weather, Solvalla’s race cards Saturday and Sunday feature many great races and horses and it will most certainly will be a nice show that take place around the oval outside of Stockholm.

Of course, if something is missing, it’s the limited presence of foreign horses in the main event, the Elitloppet. When American-bred Back Of The Neck opted out of participating, time was not on Solvalla’s side and the track’s sports general Anders Malmrot couldn’t find a replacement horse from America in such a short time. That’s too bad and if Elitloppet will be considered as the best international mile race in the world for the older elite, more horses from outside of Sweden need to be invited at an earlier stage in the process of building the race.

But it’s still an exciting weekend ahead of us and it’s not only the main race that holds high class.

Finals in two divisions of Breeders Course for 3-year-olds are on the race card Sunday, where the open class offers $102,500 to the winner. It is simply full of good races, as usual, when Solvalla arms for the biggest event of the year.

Pink is the color this weekend. The color of the Elitloppet.

Five-year-old Önas Prince claimed big titles last season and trainer Per Nordström has been clear about his goal with this talented trotter. If he could choose one post position in an elimination heat, he would have picked number 1. This will be Önas Prince’s big examination.

Brother Bill, 6-years-old, has competed against horses such as Hail Mary, Power and Don Fanucci Zet throughout his career and even if he lacks a win 2022, Timo Nurmos’ trotter has skills enough to be a serious factor in this heat.

Cokstile became the winner in 2020 year’s edition of Elitloppet after Propulsion was disqualified due to a nerve procedure done in the U.S. The Norwegian-bred 9-year-old impressed in the Finlandia-ajo earlier in May and from a perfect number he should secure a spot in the final.

The only American element in the Elitloppet 2022 and the most difficult horse to put into the race’s context. A quick leaver who can, or will try, to hit an inside position at an early stage of the race. The wagering firms don’t believe in the Canadian horse, but Canada has been successful in Elitloppet before. Billyjojimbob won this race 30 years ago.

Click Bait secured his spot in the race by winning $80,000 Prins Daniel’s race last Saturday. One of the quickest leavers in the game, at least in Europe, with some luck with the trip, the 6-year-old can reach the final.

Powerful chestnut, bred and owned in Italy, trained and driven by Italian harness racing’s total dominant Gocciadoro. Vernissage Grif enters Elitloppet after a weak performance at Solvalla, to say the least, but if he competes at his highest level, he can beat them all.

Richard Westerink really knows how to win the Elitloppet. Etonnant’s sire Timoko took two trophies in the race (2014 and 2017) with Westerink as trainer. In Etonnant, the Dutch trainer has a super trotter who has shown great abilities not only in the longer races in France, but also in the mile race Criterium de Vitesse in Cagnes-sur-Mer. There might be an obstacle for him though. Etonnant is not too keen in starting behind the gate and how will he manage to perform on a 5/8 mile track?

Just like 2021, Don Fanucci Zet starts his elimination from post 8 behind the gate and last year he eventually won the final. This homebred 6-year-old has looked brilliant in his starts 2022, but the post will open up for a spectacular performance to reach the final.

Snowstorm Hanover has reached new levels since he was moved from Stefan Melander to Daniel Redén. Melander was Redén’s employer for 13 years before Stall Zet became the new boss and now the two trainers can lean back and enjoy a common participant in the prestigious mile race. Fun fact: Redén was a 19-year-old lad and caretaker of Stefan Melander’s 1999 Elitloppet contender Lucky Po.

Six-year-old Admiral As was sold as a yearling in Italy and has always had some kind of mythical reputation. The hunger for winning surrounds Admiral As’ essence and even if he now stands in front of his toughest task so far in his life. He cannot be counted out as a serious contender. Per Lennartsson replaces in the bike since Örjan Kihlström opted to drive Don Fanucci Zet.

Åke Svanstedt enters the Elitloppet and is entrusted behind one of the hottest horses in the race this year. Who’s Who has lined up some really big trophies during his career and comes from a pretty safe win in Paralympiatravet. Svanstedt will be very welcomed by the audience at Solvalla, that’s for sure and he can win the Elitloppet this year.

The highly mentioned move from Robert Bergh to Daniel Redén during the fall 2021 put some sparks in Swedish harness racing forums and Hail Mary has only made one start for his new trainer prior to Elitloppet. Via an impressive first over win, Hail Mary has reached the level to become the first choice in Elitloppet this year. Interesting start, interesting horse.

Night Brodde became the fans’ choice last week and he grabbed the last spot in Elitloppet 2022. Conrad Lugauer’s trotter was a strong bronze medalist in Paralympiatravet and his ability to leave quickly can be a valuable factor for him.

Seven-year-old Mister F.Daag has been surrounded by good reputation ever since he entered the track in his early years and when he won Copenhagen Cup two weeks ago, the German bred trotter took a step closer to Elitloppet. Dutch duo Robin Bakker and Paul Hagoort is competitive basically everywhere they participate.

Last year’s runner up in the Elitloppet has been successful in France during the winter and we know that Solvalla’s conditions suits him well. French top driver Matthieu Abrivard get along great with the horse and Vivid Wise As has to be taken seriously even from a bad post.