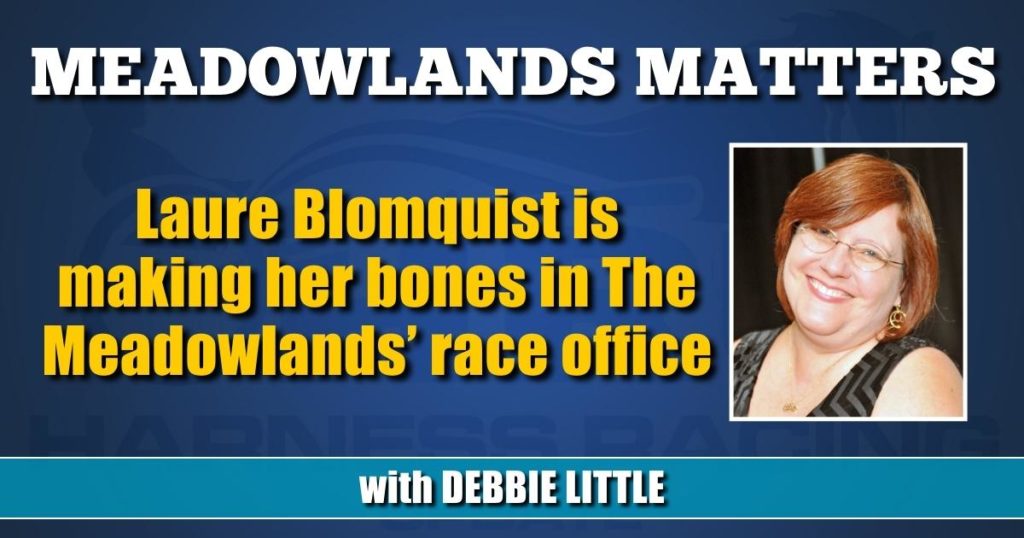 After a lifetime in the industry, Laure Blomquist is now a racing office assistant at The Meadowlands.

As an anthropology major, Laure Blomquist studied the past, but it wasn’t until she worked at The Meadowlands that she discovered her future.

At Montclair State, Blomquist majored in Geology, English and History before being fascinated by Anthropology.

“It was interesting because during my last semester I got to work at the Museum of Natural History putting together a model of a triceratops dinosaur,” said Blomquist. “That was way cool. But to go on into anthropology you really need advanced degrees.”

She eventually landed a job on Wall Street, but her heart wasn’t in it after spending a summer around horses.

Blomquist didn’t grow up in a horse racing family, but at a young age she fell in love with horses all the same.

“I’ve loved horses for as far back as I can remember,” said Blomquist. “I think when I was 6 years old, I told my mother I was going to marry a horse. But living in Jersey City and Bayonne, there weren’t any [horse stables] close by.

“Then one day, I was 9 years old, I think, I was flipping around on the TV and I saw Buckpasser win the [1966] Woodward. He came from last to first, right on the wire, and I thought that’s the most incredible thing I’ve ever seen. And I fell in love with him and followed his career until he retired, unfortunately, the next year. But that got me interested in racing. Then I became a racing fan and started reading the [Daily Racing] Form when I was 9-years-old. But I never had any hands-on experience, I was just a fan.”

The summer following her college graduation, her next-door neighbor got a job as a caretaker on The Meadowlands backstretch and one day took Blomquist with her and gave her the nickel tour.

“So, she took me around and introduced me and I was lucky enough to get on with [trainer] Steve Crevani. He needed somebody at the time and he was willing to teach me and had the patience to take on a neophyte. So that was huge. And I just stayed there for the summer and really enjoyed it and then I said, ‘Okay, I have to go back to the real world, so I went and got a job on Wall Street and I hated it. I kept thinking I want to be back with the horses.

“So, then I said life is just too short. If you do what you love, you never work a day in your life, so I came back, but I came back in the throes of winter and I got frostbite. It was really rough, but I stuck it out and I’m glad that I did and here I am all these years later.”

Blomquist was a caretaker for 11 years and loved every minute of it.

“I just couldn’t wait to get up in the morning and go to the barn,” said Blomquist. “When I got my first paychecks with Steve, I couldn’t believe I was getting paid for doing this because I just loved it so much. I often laugh because if I’d stayed on Wall Street, I might have been able to own a horse instead of taking care of them. But I don’t know if that would have been as rewarding.”

During her time on the backstretch, Blomquist worked for several trainers, including the Campbell brothers, John and Jim. In fact, she was working for Jim when another job opportunity at The Meadowlands came her way.

“One day, I happened to see an ad in the paper, Stan Bergstein put it in and he needed an assistant for his office and I think at the time he was out in Morristown [NJ],” said Blomquist. “So, I interviewed with him and he was such a wonderful gentleman and he helped me immensely. And he said, ‘I would hire you, but I’m really worried about the commute with you coming from Bayonne to Morristown every day. I know Joe DeFrank needs somebody in the program department [at The Meadowlands]. I’ll talk to Joe. Go see Joe for an interview.’ And here I am all these years later.”

Jim Campbell couldn’t say enough good things about Blomquist and even though he valued the work she was doing for him; he wasn’t going to stand in the way of her new opportunity.

“She was very dedicated to her work and she was very knowledgeable about what she was doing and she always had a lot of good feedback to give you about a horse and how they were acting,” said Campbell. “She was supposed to come back to work for me and I guess she had also applied for a job at The Meadowlands. Somebody from The Meadowlands called wanting a recommendation on Laure, so, I obviously gave them a very good recommendation and then she went to work for The Meadowlands and she’s been there ever since.

“I’ve always told anybody’s that worked for me, if they find a job that’s better than working for me, then I’m happy for them. And that’s the way I felt with Laure. It was a good opportunity for her, so I was happy for her.”

Blomquist started in the program department in 1990 and around 2007 then race secretary Peter Koch asked if she wanted to move to the race office.

“She knows the place like the back of her hand,” said Warren. “She’s not my right-hand man, but she is my right-hand woman. She knows everything about The Meadowlands and does everything that she’s called upon for and she’s a very nice person. She is an amazingly kind person. There’s not a mean bone in her body. She is helpful and will go the extra mile for anyone.”

Campbell had a similar description for Blomquist – 99.9 per cent of the time – but that remaining tenth of a per cent could be likened to Bruce Banner’s alter ego.

“Laure is the sweetest girl that you could ever meet, and she’s small, but don’t ever piss her off because if she gets pissed off, she turns into 6-foot-5 and mean,” said Campbell. “And I know that because not intentionally, I pissed her off a few times and I saw a different side to Laure. She never lets her temper get in the way of her horses. She’s sweet little Laure around her horses.”

One of the best things that came out of Blomquist’s job in racing happened in 1988.

“I would have to say my favorite horse of all time is the one that I actually ended up buying and making into my riding horse, Unobtrusive Bloom,” said Blomquist. “Mr. Suslow owned him and he had quite a story that horse, but I ended up being able to retire him and took many wonderful trail rides with him.

“I’m the only one in my family that’s horse crazy. I don’t know where I got that gene from. Maybe way back in my ancestors because I have Swedish and Greek ancestors. It’s always puzzled me because it certainly wasn’t like I was exposed through my family, like so many people were in this industry. I pretty much just chose it for myself.”