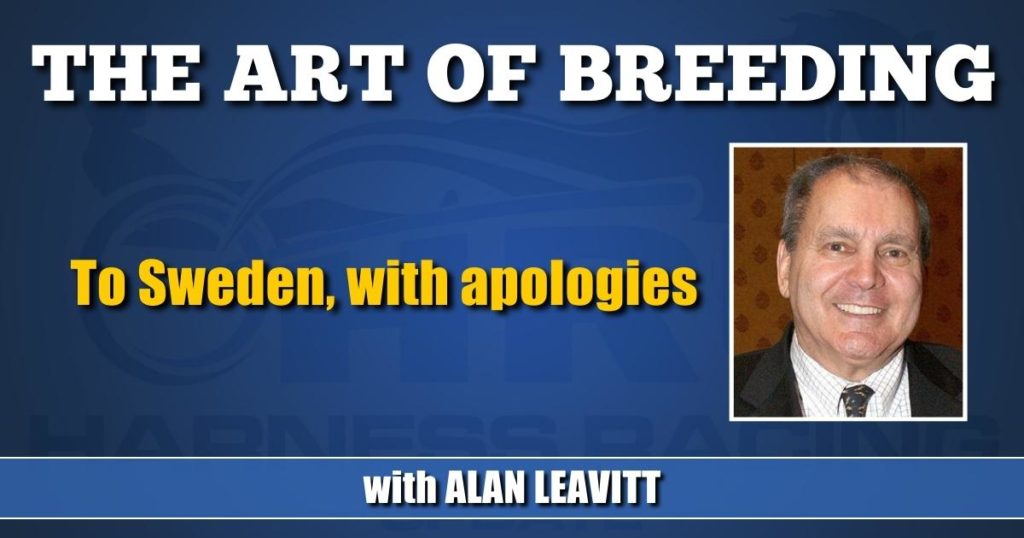 To Sweden, with apologies

An article about Jujubee caught my eye, and I compulsively ran off his five-generation pedigree. For starters, he’s by Creatine and out of La Cantera, by Cantab Hall. He was made and driven in his first starts at 2 by Greg Wright, Jr. Wright is a top horseman, well known for developing outstanding young horses, a goodly number of which he then sold and watched them go on winning for their new connections.

Jujubee had a light campaign in overnights at 2, then came back last year at 3 to absolutely devastate his division, winning everything including the Kentucky Futurity and the Breeders Crown. Hambletonian week, to which he was ineligible, he won the $50,000 Muscle Hill stake at the Meadowlands in 1:49.4.

By comparison, Captain Corey, a great colt himself, went in 1:51 winning the Hambletonian. And I have to point out that Captain Corey was started on his way to championship form when he was driven to a well-rated second in his first lifetime start by Sarah Svanstedt, aka Mrs. Ake Svanstedt. I’m sure I’m not alone in saying that if Mrs. S. offered to sell me a bridge, I’d only ask how much is the down payment?

But back to Jujubee, whose name, it turns out, is originally the name of a famous drag queen. How it became the name of a standardbred horse is a little beyond me. Like they still say, in certain circles, Go Figure.

Jujubee is line-bred, 3 by 4, to Garland Lobell, and also line-bred, 4 by 4, to Valley Victory. As a quick refresher, if the sum of the generations in which the same name appears is six or less, the horse so bred is said to be In-Bred to that ancestor.

If the sum of the generations in which the same name appears is seven or eight, a horse so bred is accurately described as Line-Bred to that ancestor.

If no horse’s name appears in less than a total of nine, a horse so bred is described as an Out-Cross.

Here, a personal reminiscence about the great sire, Garland Lobell. When I was operating Lana Lobell Farms, Jim Harrison was my general manager.

Right before the annual Harrisburg Sale in 1971, he pointed out that Hanover had just bailed on Ayres as a sire, selling him to darkest Italy. But two years before they had bred him to some nice mares, and their yearling fillies were being sold that year at Harrisburg.

There was certainly no knock on Ayres as a broodmare sire, but the fact that the Shoe Farms had just sold him overseas took all the glow off his yearling fillies.

Jim and I bought five Ayers fillies in one session. The most we gave was $9,700, for Genya Hanover.

Now it’s a few years later, and I get a call from a smooth talking trainer from Illinois. He convinces me that his daughter of Genya Hanover is a steal at $20,000, because he’s going to put 1:58 or faster on her full brother which he’s taking to Lexington the next week.

So I bite, hook, line, and wallet. But when I tell Jim about my purchase, he goes slightly bananas.

“Who the hell are we going to breed a daughter of Speedy Crown to when we’re standing him and his son, Speedy Somolli?”

This followed by a crash of Jim’s phone into its cradle. I should mention that Jim’s office phone had to be replaced on a regular basis.

But by the next breeding season things had cooled slightly, and Gamin Lobell, my Speedy Crown filly, was bred to ABC Freight. The result of that mating was Garland Lobell, and like they say, from then on it was all rock n roll.

As for ABC Freight, he was another perfect example of a stallion’s 2-year-old racing career pointing out his great sire potential. In a day when there weren’t many races for 2-year-old trotters, ABC Freight won the only decent-sized purse offered, a stakes race at Roosevelt.

Then he went over to the newly opened Meadowlands, and beat a good field of aged trotters, in 2:00.4. On the basis of which he was shipped to California, where Joe O’Brien drove him to a new world’s record of 1:57.2 in a solitary time trial. The USTA only shows him with earnings of $176,965, but I’m sure that’s wrong on the low side.

Although ABC Freight was plagued with low fertility, from limited opportunity he did sire a Hambletonian winner in Historic Freight. Retrospectively, Jim and I should have given him more of a chance, but at the time all our attention was devoted to Speedy Crown and Speedy Somolli.

Finally, I had a brief chat with Dr. Rebecca Bellone, the lady who is doing the genetic research for the USTA. I did tell her that with all my compulsive printing out of five-generation pedigrees, I had not found one that was truly inbred. Which bodes well for our breeds of American trotters and American pacers, as both breeds now are well diversified.

And even more finally, I apologize to all the Swedes I’ve clashed with over their ban of all trotters who race with trotting hobbles (heartbreaking-news-about-monte-mikis-retirement). That apology especially applies to Anders Malmrot at Solvalla and Ulf Lindstrom. I fear I’ve also upset my dear friends Lina Alm and Thomas Moberg, which I deeply regret.

I hope they will all be coming to Lexington this fall, and I’ll have the opportunity to offer my apologies in person.