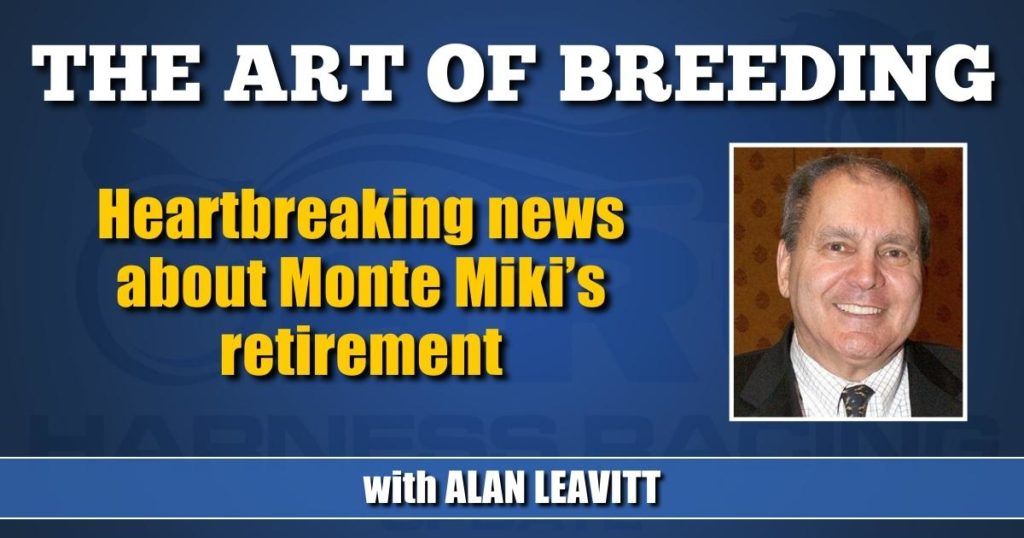 It’s always disheartening when a top horse breaks down, especially so when it’s last year’s champion 2-year-old pacing colt, Monte Miki. A son of Always B Miki, out of Montenegro, by Camluck, M.M. won $665,778 and took a record of 1:50.4 during his 2-year-old campaign in 2021.

Here is a star studded stallion prospect who only lost one race last year, while winning both The Metro Pace and the Breeders Crown. Looking at his extended pedigree, you don’t hit the same name more than once until you get to the fourth generation, where Big Towner checks in three times.

As a quick refresher: when the sum of the generations where the same name appears twice is six or less, that is inbreeding.

When the sum of the generations where the same name appears is seven or eight, that is line breeding. (So Monte Miki is line bred three times to Big Towner).

When the sum of the generations where the same name appears is higher than eight, that horse is accurately described as an outcross.

It was amusing to me to note that in M.M.’s fourth generation, you not only see Big Towner three times, you also see Most Happy Fella’s name. Both horses stood at Blue Chip in days of yore. Various wits of that day, technically described in the King’s English as smart arses, would hint that maybe Big Towner was really by MHF, not Gene Abbe.

Since Bill Brown was the Blue Chip farm manager during those years, anyone lucky enough to know him knew that he was meticulous in everything he did, and everything was strictly by the book.

Regarding Gene Abbe, thanks to Hal Jones, who managed Walter Michael’s Pickwick Farm in Bucyrus, OH, he was the first standardbred stallion to take advantage of artificial insemination.

Gene Abbe was a decent racehorse, as far as his phenotype or the living horse went. But he clearly had a superior genotype, or genetic profile, which determines a stallion’s ability to sire speed. To think of it in simplest terms, imagine a deck of cards, which runs from a low card of two to a high card of ace.

Somewhere in each horse’s deck is the speed gene. For an average stallion, his high speed gene card is probably a seven. For a top sire, it’s probably a 10, or even a jack. The genetic inheritance of every horse is determined at conception, with each parent contributing 50 per cent of the foal’s genetic inheritance, although what each one contributes is entirely different.

In the case of Gene Abbe, every foal he conceived obviously started with a high card, or fast gene, so he always sired a horse with a respectable amount of speed. When the mare, or dam, also came up with a high card for her speed gene, you had a stakes winner.

In Gene Abbe’s day, there were more standardbred mares in Ohio than any other state, and they flocked to the horse and Hal Jones. He rewarded his followers not only with a lot of good raceway horses, but also horses that could compete at the highest level. Two of the best free-for-allers in my early days were Stephan Smith and Irvin Paul, and they went at it every Saturday night at either Roosevelt or Yonkers.

There was an interesting angle to those two full brothers. In 1924, a mare named May Dodge was foaled. She had only four foals, all by The Senator, but two of her three fillies changed the course of the American pacing breed.

They were Romola and Nora Adele. In 1946, May Dodge produced a filly by Hal Dale, named Romola Hal. From her has descended a great family of crack pacers, led by Romola Hanover, one of the best pacing producing mares in the Register. Her influence is still alive and well today.

Nora Adele also was a standout producer, and she still plays a part in today’s pacing pedigrees.

Then there was May Dodge’s third daughter, Ripples, foaled in 1930. She only produced three foals, including two mares by Cold Cash. One of them, the musically named Jackie Jingles, produced a number of horses that were just horses, and those just horses produced more of the same.

But the other mare, also by Cold Cash, was Edalena. Bred twice to Gene Abbe, she came up with two colts named Irvin Paul and Stephan Smith. In a time of limited purses, Irvin Paul won $548,518, and Stephan Smith won $335,527. A credit to May Dodge and her family, and to Gene Abbe and Hal Jones, who showed the way to a brave new world for all of us to become part of.

ONEY HALL SNUBBED BY THE ELITLOPPET?

On a more personal note, this kid has had an exchange of emails with Anders Malmrot, the Big Dog of Solvalla Racetrack in Sweden.

The ostensible subject was our trotting gelding, Oney Hall, who has been racing well at Woodbine Mohawk Park (see Between the Lines), where he’s won the last five preferred trots, the top purse race for Ontario trotters at the moment.

The caper started when I got a call from Oney’s trainer, Bob McIntosh, who wanted to know if I knew why one of Oney’s competitors, Perfetto, had been invited to the Elitloppet and we hadn’t, even though we cleaned his clock the last three times the two horses met.

So, I wrote to Mr. Malmrot, seeking enlightenment. It wasn’t immediately forthcoming, but under heavy urging, as they say at the runners, Mr. Malmrot said he hadn’t invited Oney Hall because in all his races at Mohawk he was treated with Lasix and wore trotting hobbles. And they — heaven forfend! — are verboten in Sweden.

I patiently replied that both Lasix and trotting hobbles were totally sanctioned by the Ontario rules of racing. I also said that it had always been an article of faith that every harness racing jurisdiction respected the rules of racing of every other jurisdiction.

Until now, and until it concerned Oney Hall. How, I asked, could a horse be excluded from one of the sport’s biggest races when he was simply complying with the rules in the jurisdiction, in this case Ontario, where he raced.

Mr. Malmrot was having none of it. Clearly the Swedish rules were not only sanctified by him, but also by the Racing Gods themselves, who presided over Swedish racing from high upon Mount Olympus.

It meant absolutely nothing to Malmrot to say that if we were invited, of course we’d race under the prevailing Swedish rules, meaning no Lasix, no hobbles. Unspoken, but crystal clear, was if I didn’t like it, Tough Turtles. And the same for the hobbled trotter I rode in on.

So, Oney Hall, who is clearly the top trotter in Canada at the moment, will not get to represent Canada in one of the most prestigious trotting races in the world. And when I find myself thinking of words that start with “S” other than Sweden, the first ones that come to mind are “self righteous,” and “stuff it.”