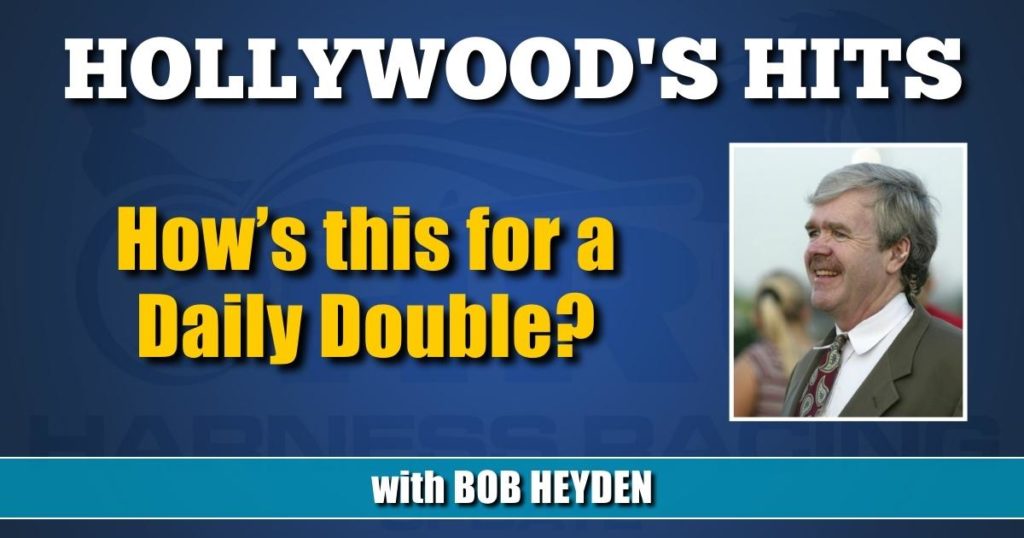 How’s this for a Daily Double?

Plano is 70 and has been in the business over half a century. He trains, owns and drives 21 horses.

Roglitz is 21 and a Maryland native and the nephew of veteran William Long. He was making his 10th career start and won for the fourth time. He actually had a Hoosier Park driving double May 5 in his fourth and fifth career drives.

There is 49 years between the two drivers.

What are Plano’s plans this year now that Pompano Park is permanently closed?

“After December 10 (closing day at Hoosier Park) we don’t know yet. My wife (Mary Ann) wants to cut back, but I work at it, keep in shape and like what I do. These are my horses. Unless it’s a Burke horse or something, I only drive mine,” he said.

Plano has been just about anywhere you can name.

Dr. Glen Brown was 100 per cent a gentleman.

He had a quiet, yet dominating, presence — mostly because of his size, -not his demeanor.

You cannot think “Armstrong” and not think of Glen Brown.

He was a dedicated lifer and when he called your name across a crowded room, somehow it stood out. He was above the rest. I simply cannot think of a single example — ever, anywhere, anytime — when an approaching Dr. Glen Brown was not a welcome sight.

He was never too big or too busy to help you.

She won 31 of her first 35 starts, raced for Linda Lockey and Myra Masterson of Ontario and was a daughter of Most Happy Fella. Jim Rankin drove and trained.

The World Cup started at the Meadowlands 40 years ago this month — in May of 1982.

Three legs, three different distances and the best pacers in the world on center stage — 1 1/8th miles, 1 1/2 miles then a flat mile. The Meadowlands’ general manager was Sam Anzalone and he was at Yonkers with a ringside seat in the 1960s for Cardigan Bay coming over and competing in the free-for-alls for five seasons. In the mid-1970s, Young Quinn also made the move from best free-for-aller Down Under to one right here, too. He was the first 1:55 winner at the Meadowlands on Sept. 25, 1976 with Joe Marsh Jr. driving for Charlie Hunter. So the decision was made to try it in the USA.

San Simeon, 31-for-32 Down Under and termed the “Wonder From Down Under” never acclimated to North America. USA went 1-2-3 across the wire with Genghis Khan, Beatcha and Skip By Night in the final dominating. Beatcha had won the first two legs and was en route to the $50,000 bonus if he could lower the existing track record of 1:53 from Abercrombie set 8/4/79. But an untimely break in deep stretch off a 1:25 three quarters cost him the extra money.

Cam Fella’s last loss and first win of his epic 28 race streak to end his brilliant career both came in the 1983 World Cup in Year 2 (It would go four years in total). Perfect Out was the last horse to defeat the “Pacing Machine” that is if you don’t count bad draws. Cam twice drew into the second tier in the series, but dominated when it counted.

On The Road Again made the World Cup all his own in 1985 by sweeping it. It helped him to briefly take over the all-time money lead before Nihilator would eventually pass him as the first ever $3 million career pacer. OTRA ended with over $2.8 million, not bad for a New Jersey Classic Sale $10,000 buy.

One other note: entering the 1984 World Cup, everyone seemed to be excited about Popular Alm. Could he be the Down Under horse to atone for San Simeon? A modern day Cardigan Bay maybe? Or maybe a duplicate of Young Quinn who had established quite a presence during his tenure here?

Alas, it was not in the cards. The Australian superstar shattered a hind pastern prior and was ruled out. He had a 1:53.2 TT down under mark and $698,733 to show for his efforts. He was 47-for-60 lifetime and 57-for-60 in the money. Another star, Frosty Imp, never was a factor here either.

In retrospect, the one horse who would have been the most apropos star from Down Under? Popular Alm. He was born Sept. 1, 1976, the very day the Meadowlands opened its doors.

Look at some key moments in the sport’s history that took place in the month of May:

• The 1966 Pace Of The Century at Yonkers Raceway took place in May. Featured were Bret Hanover, the 4-5 fave, and Cardigan Bay, winner of 10 straight. Cardigan Bay, still two years from retirement, won it.

• On May 22, 1987, in the $200,000 New Jersey Sires Stakes, Run The Table for the Campbell brothers got the measure of Jate Lobell who had never lost a race. The track management at the Meadowlands doubled the purse to make sure Jate Lobell would take his unblemished record to East Rutherford. He had won a local overnight at 2 en route to a 16-for-16 mark. Run The Table’s 1:51 mile would hold up as the sport’s fastest.

• May 1979 at Vernon Downs was where Niatross got his career going 43 years ago.

• In May of 1984 at The Meadowlands the Miss New Jersey stakes began with Ray Remmen taking edition #1 with Showplace Trixie. The Chief would do it again in 1985 with Poplar Lil. Remmen turns 75 on May 28.