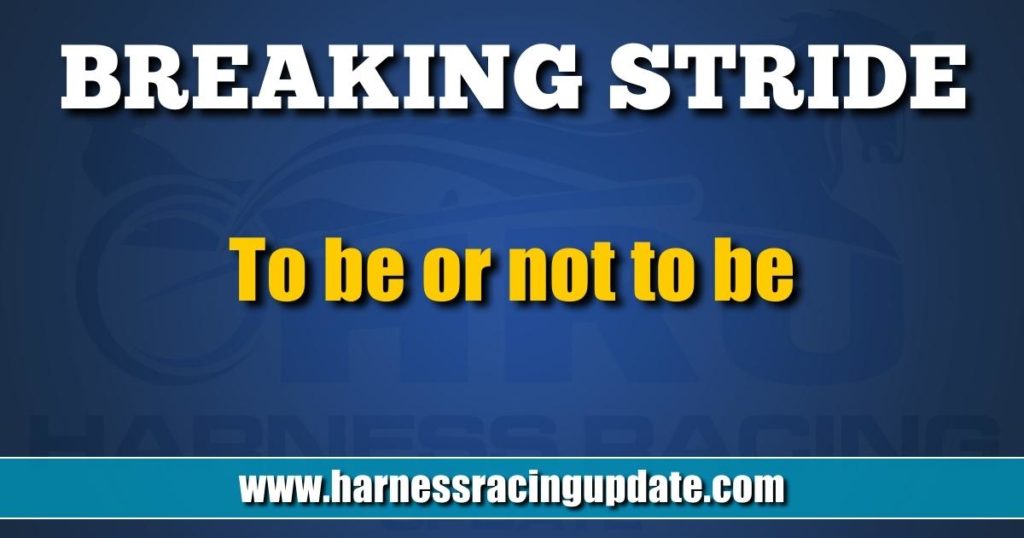 To be or not to be

The end of harness racing at Pompano was a bummer. I never visited, never raced a horse there, but wagering on the iPad gave me a good vibe. The absence of racing in Florida gives us all bad vibes. Rising Phoenix-like from sporting extinction is not easy. Here is a shortlist of sports that did not make it back to popularity:

Perhaps future people will chuckle when they read the updated list of extinct sports and see Harness horse racing – Horses using a specific gait to haul human beings seated in bicycle-like carts for one mile in circles at breathtaking speeds.

Most of us involved in our sport would prefer to follow in the footsteps of Kolven or Jeu de Paume. We want to keep our sport around in some form.

No doubt there were wagers on the above sports. We could all imagine ourselves wagering on who would pull the head off the dangling goose or how close to noon the stagecoach would arrive at the Dover Pub. A few pence or drachma on the outcome of an event always spices up the game, but most games do not rely on this income. Gambling money was always floating around, but, in our case, gambling was everything.

If the Pall Mall league wanted to avoid extinction, they needed to find people and places for the games and ways to subsidize the expenses. If you’re involved in competitive Pall Mall, yachting racing, or polo matches, the participants will pay the bulk of the bills, which will be high. Finding enough people with enthusiasm and money who desire to play on will be the dividing line. Heck, auto polo would still be popular if enough players were enthusiastic, rich, and determined enough.

If harness racing sport sputters towards an end, as it did in Florida, the odds are that some will still wish to continue racing beautiful horses in harness.

Hopefully, the sport will return to where it began, with a group of deep-pocketed people who have a thirst for the game and can afford to quench that thirst.

We all understood that harness racing in Florida was in jeopardy. We are all glum that it occurred. Peons are not much help. However, if wealthy harness racing enthusiasts in Florida spent those days counting down to the last race at Pompano designing a viable stakes racing program for the state, or a replacement racetrack, we would be looking ahead and not looking back.

If innovative benefactors said, “The hell with politicians and gambling revenue, let’s revive harness horseracing in Florida. We can do something to make racing fun and somewhat feasible for people to play. We will make lemonade out of the lemons. Maybe the sport may not rely totally on a pari-mutuel racetrack for a while, but it WILL be.”

Savvy sporting businesspeople who have resources could take this looming void in Florida as a challenge. What an exciting project for a handful of people with disposable assets and a love for a free-legged trotter in full flight. Resurrecting harness racing in Florida would be an exciting, fulfilling task. Indeed, it would be an improvement from sulking around muttering, “What happened to Pompano stinks.”

The brave, creative warriors could have started preparing for the transition years ago or six months ago, but hopefully, someone will start today. Doing the impossible is possible for extraordinary people.

Are you one of those people?

Do you dream big?

Could you take our game into the next phase and provide a framework for racing?

Could we be better than ever?

Or are we destined to be Fox Tossers in Florida?