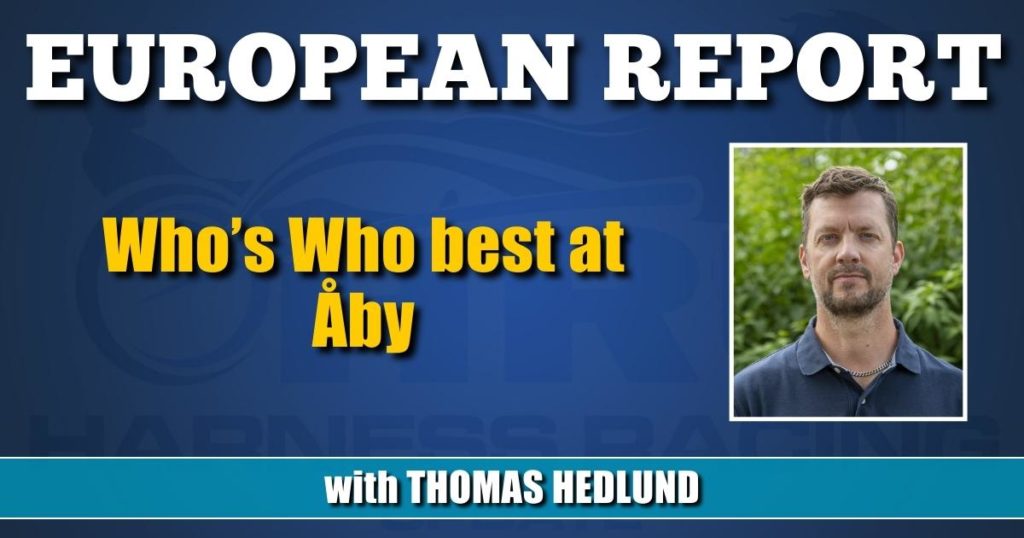 Who’s Who best at Åby

The $305,000 Paralympiatravet was on the schedule when Åby played host to a nice race card on Saturday (May 7) afternoon. Though, to be honest, the race never reached the level of expectations set before it started. Initially thought to be an open contest, Pasi Aikio-trained Who’s Who (Maharajah) made the race into a slow dance when driver Örjan Kihlström was allowed to reach the first kilometer in a mile rate of 1:59.3.

The only dramatic part of the race happened in the first turn, when Who’s Who lost the gait in front. Quick starter Night Brodde (post 8) hit the front as Kihlström had to save Who’s Who from making a break, but the driver was quick minded and pushed Who’s Who to the lead once again at the back stretch.

But after that, pretty much nothing more happened and the son of Maharajah easily defended himself when Extreme finished quickly on the inside. Who’s Who won in a mile rate of 1:55.3, Extreme was strong as runner up and Night Brodde followed as third.

It’s not a wild guess to say that Who’s Who will get an invitation to Elitloppet after this victory and that’s a goal that trainer Aikio set during the past winter.

Speaking of the Elitloppet, Admiral As (Ready Cash), trained by Reijo Liljendahl, was invited by Solvalla for the big mile race on Saturday afternoon.

THE KING STAYS ON THE THRONE

Father Patrick son Francesco Zet dominated the high staked races for 3-year-olds in Sweden prior to the season and when it was time for the $205,000 Kungapokalen for 4-year-old colts and geldings on Saturday (May 7) afternoon, the Daniel Redén trained trotter established his position as king of the crop.

The big talk ahead of the race was about whether Iznogoud Am could challenge and even defeat Francesco Zet and as the race went on, the two drivers Örjan Kihlström (Francesco Zet) and Björn Goop (Iznogoud Am) began the tough battle in the first turn. Kihlström managed to hit the front position as the field turned into the back stretch for the first time, while Iznogoud Am had to face a tough first over trip. One can say that the race’s outcome was told at that point.

Because Francesco Zet is hard to beat, when Kihlström leaned back in the bike at the top of the stretch, the fans at Åby understood who would capture the trophy.

The mile rate was 1:55.3 over 1.3 miles and behind Francesco Zet, Power Doc and Aquarius Face finished strongly as second and third.

Chebba Mil (Readly Express), was the least merited trotted in the $205,000 Drottningpokalen. But the Italian bred trained by Paul Hagoort and piloted by Dutch driver Robin Bakker won her elimination at Åby racetrack two weeks ago. After a perfect trip, served by Bakker, the mare bested a brave first over trotter Deborah S.H. in Saturday’s (May 7) final meters.

The triumph is big for Dutch harness racing and both Hagoort and Bakker know how to be competitive in stronger harness racing countries like Sweden. They have earlier competed with great success with horses such as Robert Bi, Mister F Daag and Wild West Diamant in high staked races in Europe and Chebba Mil’s victory in the Drottningpokalen must be considered one of their greatest wins on the international level.