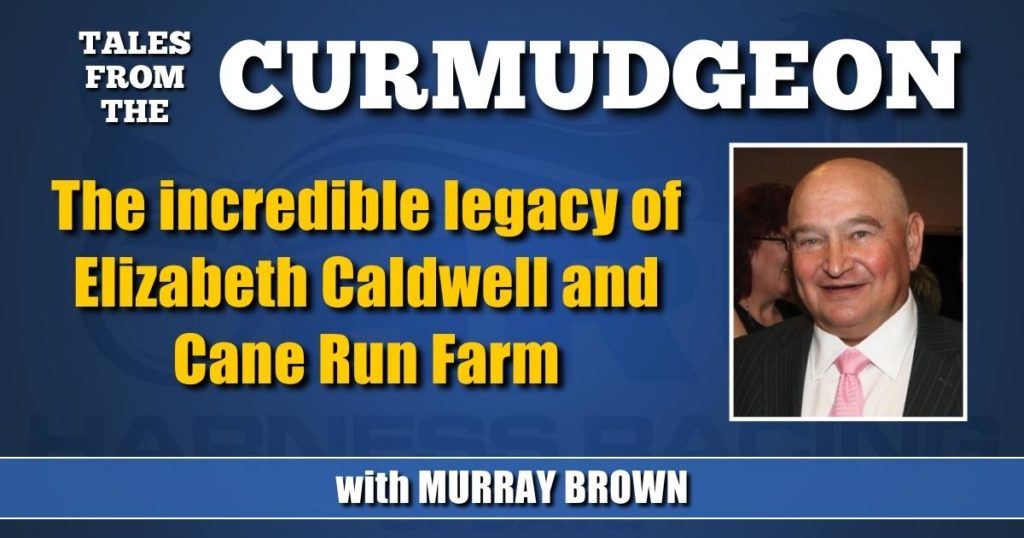 The incredible legacy of Elizabeth Caldwell and Cane Run Farm

In this scribe’s opinion the three most important words when buying prospective breeding stock are family, family and family. When we refer to family in this manner, we are generally speaking of the maternal side of the pedigree. In all of harness racing, there are no families of the human species that are deeper than that of Elizabeth Caldwell, who with her brother Danny manages Cane Run Farm in Georgetown, KY. The maternal side of her pedigree is without peer in our sport. Her grandmother was Frances Dodge Johnson Van Lennep, the founder of the greatly missed and lamented Castleton Farm. Elizabeth’s mother is Fredericka “Rikki” Caldwell who established and still owns Cane Run.

Asked what she does at Cane Run, Elizabeth said, “a little bit of everything, I suppose. Myself and my brother Danny are present when every mare foals. We either do or supervise everything that goes on here.”

Sadly, I spoke with Elizabeth at a somewhat traumatic time. Her long-time show and riding horse Aragorn had perished in a barn fire two days prior.

Q: Please except my condolences on your loss. It’s an experience no horse owner should ever have to go through.

“It was terrible for me, but much more for the Brannon family who lost everything in the fire. A GoFundMe page has been established to help them get through this terrible tragedy. I looked upon Aragorn as being somewhat like my best friend. He was 22 and retired from showing, but I still rode him often. I will miss having him.

“My mom had been boarding her horses at Castleton Farm. In 1982, she purchased 215 acres In Georgetown, the land that is now Cane Run. At the time, she had one of the two mares that were destined to become the foundation mares for the farm. The other one was Deanella Hanover who was purchased from the Castleton Farms dispersal. From these two, several champions are descended — horses like Moni Maker, Nans Catch and Propulsion. We presently have 82 horses here on the farm We have had 17 babies foaled here so far this year. There are eight more expected.”

Q: From a relatively small number of yearlings that the farm has raised and sold, you have had some remarkable success. Tell us about some of your graduates.

“Without a doubt the most well-known horse bred by us was the remarkable Moni Maker. She was one of the last Speedy Crown yearlings ever sold and a daughter of the great Hambletonian Oaks winner Nan’s Catch. Nan’s Catch was described by master horseman Jan Johnson, as being in his opinion the best horse ever trained and raced by himself and his Hall of Fame partners Hakan Wallner and Berndt Lindstedt. Moni Maker won $5,589,256 and was the winner of classic races all over the world. We followed her career avidly. It was such a great thrill to be at the Prix d’Amerique and the Elitlopp and see a horse that we raised beat the best horses in the world. Another great one is Propulsion who won the Elitlopp and numerous other Classic races throughout Europe. Unfortunately, his owners were stripped of all the money he earned because the Swedish breeding authorities were unaware of the fact that he had been nerved, even though it was right there on his registration papers. It was a very sad ending to a remarkable racing career. Another really good one we raised and sold was Habitat who earned $1,262,221.”

Q: You will have 90 horses on the farm after all the mares have foaled. Would that be the greatest number you’ve had?

“Without a doubt, This new Kentucky program has been amazing. Of the 90 horses that we will have at the end of the foaling season, the majority will be owned by Cane Run in partnership. The remainder are outside owned. Obviously, the impetus for the program was meant to get more horses to Kentucky and rejuvenate the breeding and racing industries. It has succeeded beyond expectations and it appears as though it will continue to grow.”

Q: You mentioned partnerships. How many of the mares you own are owned with partners?

“We presently own 18 broodmares. All but one of them are owned in partnerships. The majority of the partnership mares are owned with Bluestone Farms as our partner. I get together with Mitchel Skolnick who is the managing partner of Bluestone and we determine which stallions they are going to. Of course, we run our choices by mom before we finalize them. We foal and raise them and prep them here for the sale. We also own breeding rights to Cantab Hall who is now retired, Muscle Hill and Captain Corey. Counting the outside owned mares, we will be breeding 40 mares this year.”

Q: Are all of your horses trotters?

“We now actually have two pacing mares. But our focus is certainly on trotters.”

Q: You also have some thoroughbreds. Do you find any differences in keeping and raising thoroughbred as opposed to standardbreds?

Q: What do you like most about running the farm?

“It would probably be having a safe foaling season — seeing the fruition of our efforts in producing healthy babies makes me very happy. Of course, the opposite side of that coin would be all the things that can go wrong in attaining that goal, including, but not limited to getting the mare in foal, having the mare carry the foal full term and then getting a strong healthy foal that is able to stand and nurse. There is nothing worse than having to phone a client and tell them that the mare they were expecting a foal from aborted or sometimes worse, that the foal died. Another area that I really enjoy is that period before the sale when people start coming to the farm to look at the yearlings. It’s especially rewarding when the yearlings put on a good show when they are turned out in the paddock. Of course, that is also a stressful time. The results of our entire year’s work is determined by how the public reacts to what we have in the sales ring in the time frame of only a few days.”

Q: Two years ago you sold a yearling Muscle Hill colt out of Danae named Damien for a million dollars. What was that like?

“It was surreal. He was a lovely colt and checked all the boxes. He had a lot of traffic by all of the major trotting horse trainers and owners. We thought he would sell well and that he would certainly top our sale. But a million dollars! We never even dreamed that could happen. Normally my mom, Danny and I stand in back of the auction ring where the yearlings are walked before entering the ring. We watch the numbers as they progress on the televisions back there. We anticipated that this colt would do really well, so we went in front to watch him sell. It was just amazing.”

Q: You like to travel especially to Europe when and where some of the classics races take place.

“That was before COVID came along, However since it became a factor I’ve stayed close to home. I really enjoyed going to Paris for the Prix d’Amerique and Sweden for the Elitlopp. If a person doesn’t like Paris, then maybe something is wrong with him or her. Stockholm at the end of May is delightful. The weather is usually great and the long days are filled with sunshine.”

Q: You are a Kentuckian, then you must be a Wildcats fan.

“Of course I am!. Although last year because of the concern about COVID I wasn’t able to get to many games. Basketball is still the top gun as far as our sports programs are concerned, but football is making some inroads. We had really good teams in both sports this last season but we had an unhappy ending.”

Q: Speaking of COVID, how has it affected you.

“I had it and it wasn’t fun. I got sick with it in early November of 2020, while the sale at Timonium was going on. It really knocked me for a loop. I was very tired and wasn’t myself for a few weeks.”

Q: Do you race as well as breed?

“We are essentially a commercial breeding operation. Occasionally, but rarely, we will keep a filly from a good mare who’s blood we want to extend in our broodmare band. We now have a 3-year-old filly in training with Per Engblom.”

Q: How about your yearling crop that will be sold this Fall?

“I think it’s quite solid. We have two Muscle Hill colts and one filly by him. We also have a Chapter Seven filly and an Always B Miki colt. Unfortunately we have an absentee from our consignment. We do not have a yearling out of Danae this year. She took a vacation in 2020. She does have a suckling colt by Muscle Hill that will be in our 2023 consignment. We were kind of hoping that she would have a filly that we could possibly retain to enhance our broodmare band — maybe next year.”

Q: What do you do when you’re not tending to the horses and the farm?

“I like to read. I follow racing, both the trotters and the runners. I love to ride. I sometimes go to the races. I follow the Wildcats.”

Reach him by email at: hofmurray@aol.com