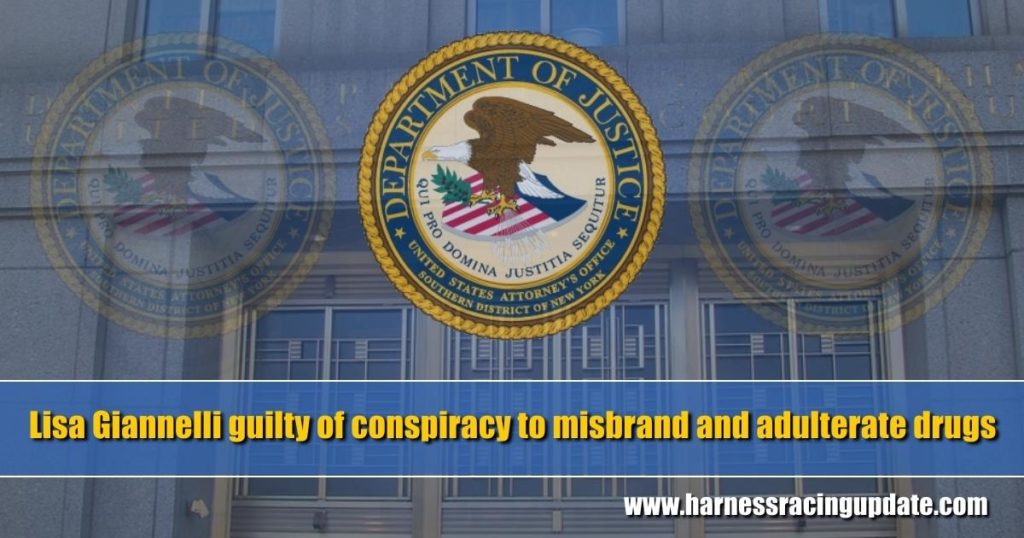 Lisa Giannelli guilty of conspiracy to misbrand and adulterate drugs

She faces a maximum sentence of five years in prison.

The federal government’s crackdown on horse doping notched another courthouse win Friday (May 6) with a jury finding Lisa Giannelli guilty of conspiracy to misbrand and adulterate drugs after an eight-day trial.

The jury of eight men and four women in U.S. District Court in New York returned the verdict after less than two hours of deliberations spanning two days.

Giannelli, 55, of Felton, DE, faces a maximum sentence of five years in prison at her sentencing Sept. 8 before Judge Mary Kay Vyskocil.

The jurors rejected Giannelli’s testimony in which she defended her actions selling medications for veterinarian Dr. Seth Fishman when she was his employee for 18 years at Florida-based Equestology.

As part of their verdict, the jury also agreed that Giannelli’s intent was to defraud and mislead.

Giannelli stood at the defense table and turned towards the jury during the reading of the verdict. She was wearing a mask and had no visible reaction. She remains free on a $100,000 bond.

She rushed out of the courtroom with her husband.

New York U.S. Attorney Damian Williams said, “For almost two decades, Lisa Giannelli peddled untestable performance-enhancing drugs to give racehorse trainers the tools to dope racehorses. As a former standardbred racehorse trainer, Giannelli knew firsthand the dangers of selling illegal, injectable performance-enhancing drugs to trainers who were recklessly injecting horses to gain a competitive edge. The jury’s swift conviction demonstrates the gravity of Giannelli’s criminal scheme. This office remains committed to holding accountable those who would engage in the kind of fraud and animal abuse exemplified by Giannelli’s crimes.”

The charges against Giannelli grew out of a lengthy FBI investigation into horse doping at thoroughbred and harness racetracks two years ago that resulted in the indictments of more than two dozen people.

Just before announcing their verdict, the jury came to the courtroom to inspect a seized drug bottle that the government introduced into evidence during the trial.

The bottle was labeled BB3 which prosecutors said was a misbranded and adulterated PED designed to boost a horse’s red blood cells.

Ten jurors walked past the bottle before two stopped to inspect the bottle with gloved hands.

“The government’s case was very strong,” juror Joe Coughlan, 56, of Valley Cottage, NY, said after the verdict. “It was a preponderance of the evidence. I couldn’t see any other verdict but guilty.”

Coughlan said it’s “obviously not a good thing” that horses were being doped at racetracks.

“That amounts to cheating,” he said.

He said he had no idea how extensive the problem was until the trial.

“It’s a sport and you’ve got bettors who are relying on everything being okay,” he said. “You want things to be above board. If they are not, what do you do?”

Prosecutors said the products Giannelli distributed for Fishman were illegal substances meant to enhance a horse’s performance while being undetectable in tests conducted by racing authorities after races.

Fishman, a Florida veterinarian, was found guilty at his own trial in February. His sentencing is May 26.

Since the initial indictments, the number of defendants has grown to 31.

Of those 14 have pleaded guilty including two former harness trainers who became government witnesses against Giannelli.

Defendants with charges still pending include the prominent trainer Jason Servis, whose 3-year-old Maximum Security finished first in the 2019 Kentucky Derby presented by Woodford Reserve (Grade 1) and then was disqualified for interfering with another horse during the race.

The jury of eight men and four women got the case in U.S. District Court in New York late in the day and deliberated for about 30 minutes before going home for the night.

Before leaving the courthouse the jury requested a large batch of government exhibits and a transcript of the testimony of a government witness, Conor Flynn. He is a former assistant harness trainer who became a cooperating witness after his arrest in a related horse doping prosecution.

Prosecutors allege Giannelli engaged in the conspiracy while working at a Florida company called Equestology that was owned by veterinarian Dr. Seth Fishman. The doctor was convicted at his own horse doping trial in February.

But defense attorney Louis Fasulo countered that Giannelli was just an employee of Fishman’s who did what she was told.

“At no time during her employment did Fishman tell her you can’t do that,” Fasulo said during his summation.

“Lisa Giannelli was a high school grad relying on her boss, doing her job as instructed and no one tells you it was wrong,” he said. “No one from the inside. No one from the outside.”

Fasulo went on, “What was her intent? Was she acting in good faith? Was she doing the right thing.”

He argued Giannelli was acting in good faith without criminal intent.

Fasulo also told jurors that he wasn’t going to tell them that trainers didn’t use drugs purchased from Giannelli “in an illegal manner.”

But he said that was their decision, not Giannelli’s.

He argued that at the track there is the “ultimate trainer rule” that says trainers are ultimately responsible for any drugs administered to their horses.

“There was no benefit for Lisa Giannelli,” Fasulo said.

“What she wanted to do was as good a job for Seth Fishman as she could and work her 16 hours a day,” Fasulo told the jury.

He argued that the government had failed to prove the Giannelli intended to defraud the racing commission. Intent is an element of the crime that Giannelli is charged with in the indictment against her.

But in rebuttal to Fasulo’s argument Mortazavi told the jury the government had more than met its burden in establishing Giannelli’s guilt.

The government called 12 witnesses and introduced dozens of pieces of evidence, including emails, texts, wiretapped phone calls, photographs. Prosecutors also presented physical evidence seized by the FBI in a search of Fishman’s business and Giannelli’s residence.

She argued it wasn’t true to say Giannelli didn’t have a stake in races won by trainers using banned substances obtained from Equestology and Giannelli.

She added, “All the talk who is leading Equestology, who the veterinarian is, who makes more money is just a distraction.”

Another distraction was the defense argument that Giannelli never gave a trainer instructions on how to dope a horse before a race, Mortazavi said.

“The defendant had the needles and the drugs and the instructions telling them how to treat a horse on the day of a race and assuring them they wouldn’t get caught,” the prosecutor said.

Mortazavi had begun her closing argument discussing criminal intent and how she said it related to Giannelli.

She said one proof of that intent to defraud and mislead was the untestability of Fishman’s drugs. She said they were designed to avoid being detected in post-race tests.

She pointed to a text exchange between Giannelli and Fishman. Giannelli wrote that a client was asking about a particular drug and Fishman responded, “have it but it tests.”

Giannelli knew that mattered to trainers bent on cheating.

She said additional proof of that intent was the lack of any labels on some products.

But Fasulo told the jury that expert could still tell what that drug was even without a label.

“If she knew, who is Ms. Giannelli deceiving,” he said.