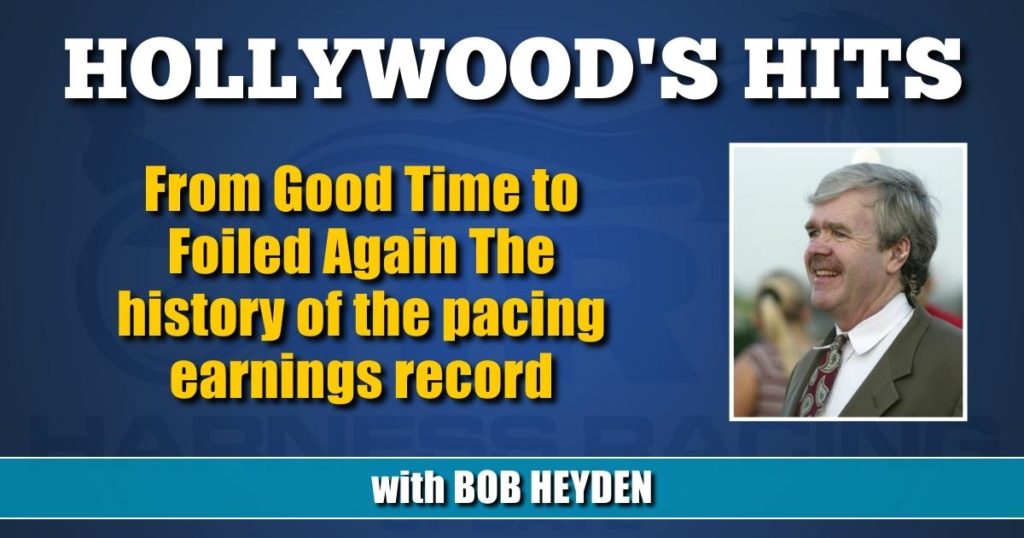 From Good Time to Foiled Again

The history of the pacing earnings record.

September 1 will mark the 10th anniversary of the day Foiled Again became the richest pacer in history.

By winning the 2012 Canadian Pacing Derby at Mohawk that night, Foiled Again surpassed Gallo Blue Chip as the top pacer in history.

Foiled Again went on to become the richest standardbred of all time, retiring with earnings of $7,635,588.

With no other pacer within shouting distance of the record, it looks like Foiled Again will take Nihilator’s crown in 2028, the year he turns 24.

Let’s take a look at the progression in the last 70 years of the all-time leading money-winning pacer:

In 1952, Good Time was number one with two Horse of the Year trophies. He held the earnings title for six years until 1958. Good Time retired with earnings of $318,792.

In 1959, Belle Acton put the ladies on the board for Team Haughton with $353,063 to claim the top spot upon retirement. She held it for a year.

In 1968, Cardigan Bay gave Stanley Dancer his second all-time pacing leader when the horse hit seven figures and was then paraded on the Ed Sullivan show for a national audience.

In 1978, Rambling Willie took over passing Albatross, but then a son of Albatross would eclipse $2 million first.

In November of 1985, Nihilator concluded his brilliant career with a victory in the Breeders Crown at Garden State Park and became history’s first $3 million winner ($3,225,653).

Interestingly, Eternal Camnation (racing from 1999-2004) was sold at the same yearling sale as Gallo Blue Chip — 1998 Standardbred Horse Sales Company auction in Harrisburg, PA — as All American Coin. It was $35,000 for her, $32,000 for him. Think anyone was thinking then that these two would reign for over a decade and would be the richest male and female pacer in the sport’s history?

Overall… 17 horses on the pacing side have eclipsed $3 million and four have topped $4 million.

His name, you ask?