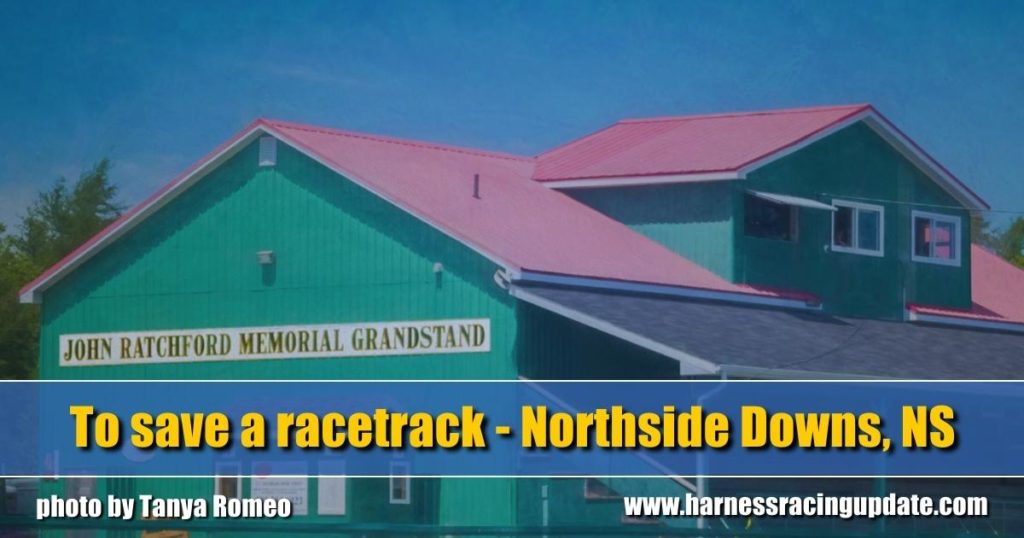 To save a racetrack

Far up the Atlantic coast, 2,236.6 miles north of Pompano Beach, a small Nova Scotia racetrack has recently averted the same fate as The Pomp (RIP 1964-2022). Florida standardbred decoupling aside, urban sprawl and skyrocketing real estate values have been transforming grandstands across the continent into rubble, backstretches into subdivisions, and harness racing into a quaint memory at an unsettling rate.

There is often unintended irony: The developer building “the Downs” on the site of Maine’s Scarborough Downs dubbed its project #ACommunityTrifecta.

Returning to Nova Scotia: Northside Downs is situated on the Cape Breton Exhibition Grounds in North Sydney. It was put up for sale as commercial real estate in late March.

Tanya Romeo Going to the gate at Northside Downs.

Continuation as a harness racing and equestrian multi-sport venue didn’t make it into the suggested uses, although they have a long tradition on the land.

North Sydney Trotting Park opened July 31, 1898. When Sydney’s Tartan Downs closed in May 2006, Northside Downs was redeployed as a racetrack. Over the decades, when it wasn’t racing, Northside found use as a training center. Inactive as a pari-mutuel venue for 18 years, the North Sydney track successfully reopened in 2007, before the current grandstand was even built. In 2009, it reported Canada’s largest per-capita increase in live handle, even though Northside was not yet available for online wagering.

Truro Raceway, the province’s only mainland track, has also survived brushes with permanent closure in the past decade. It’s currently in the midst of infrastructure improvements that Nova Scotia Department of Agriculture spokesman Bruce Nunn said are intended to support its future as a racing venue.

“The grounds are being upgraded to support the harness racing and exhibition industries. The Department of Agriculture, through the Farm Loan Board, will continue to own the property, and the department is looking for new management. An RFP [request for proposals] for new management closed at the end of February.”

Nunn told HRU that operational details had not been made public, but “We expect to be in a position to announce the successful RFP applicant in the weeks ahead.”

Nunn added that Truro Raceway is protected by the latest arrangement: “The Farm Loan Board is committed to having harness racing on the property. The RFP was for a 10 year period, and harness racing is to be maintained on the site as part of the RFP.” The request for proposals stipulated that applicants were “required to maintain the history and spirit of the property as an agricultural and harness racing destination, while also unlocking the property’s full potential as a driver of economic and community development.”

The Department of Agriculture spokesman said there was no such condition in place for the Cape Breton Exhibition Grounds, but “The Farm Loan Board is always able to consider loan applications for Agriculture properties, and the Department of Agriculture has staff resources such as Business Development officers available to assist industry as needed.” The provincial Farm Loan Board is a Crown corporation that describes its role as “foster[ing] the development of sustainable agriculture and agri-rural businesses in Nova Scotia through responsible lending,” which it has done for a century.

When the Cape Breton Exhibition Grounds went on the market, there was no specific plan to do away with Northside Downs. “The current owner, the Cape Breton-Richmond Federation of Agriculture, just thought that their efforts would be better served focusing on programming, not so much running these facilities,” said Harness Racing Cape Breton chair Joel LeBlanc. “So they decided to put the property for sale. They felt they were spending a lot of human hours and a lot of finances towards something that was sort of out of their mandate. Then COVID really impacted them as well, where they didn’t have their local week-long exhibition the last two years. That was a big revenue-generator for them.

“There were a number of different factors that led to them selling, but their intent right from the get-go was they did want to sell it to a new owner who was going to keep it going in its current function. So that’s how this new exhibition group was formed. They’re facility users as well, but they don’t use the racetrack portion. [They use the] indoor arena and exhibition barns… It makes a pretty good partnership, even though we don’t share a whole lot of space. Harness Racing Cape Breton did have meetings with this newly-formed Cape Breton Exhibition Society. We did talk about trying to form a partnership going forward.”

LeBlanc told HRU that the Exhibition Society’s bid may not have been the largest, but it was selected over at least “two other real estate bids” considered by the Cape Breton-Richmond Federation of Agriculture.

Northside Downs held its first qualifiers of the year last Saturday (April 30), the same day that the good news broke about the property’s future. Exhibition Society co-founder Donnie MacNeil shared his relief with the Cape Breton Post last weekend, noting that, “Of the four offers, we know at least one, and possibly more, were slated for development. So just to be able to avoid that, to avoid the wrecking ball and the bulldozers, was a huge relief.”

The timing is critical for local horse owners, confirmed LeBlanc.

“There’s no question it’s key for the local standardbreds, because right now there’s only a handful of training tracks in the Sydney area… Stabling is pretty tight here, to be honest with you. Talking today, there’s not really a lot of excess space for new horses… It is one of the challenges that we do have.”

Western Cape Breton lost two other training facilities this year: the former Donmar Farms, destroyed in a tragic December fire, and the decommissioned Tartan Downs, which was sold by owner Jack MacNeil to Cape Breton University in 2019 for redevelopment. It remains in use as a training center with stabling, but a 430-unit residential project is preparing to break ground.

“There’s still a handful of horses there, I’d say five or less, and they’re basically staying there on little three-month mini-agreements,” said LeBlanc. “Last I heard, unofficially, was they were going to be okay there for the next few months… There’s been nothing done there to date, but I know [residential development] is in the plans to happen fairly soon.”

The 2020 request for Tartan Downs development proposals stated that the track would be replaced by “a complete neighborhood that will enhance social interaction, improve the overall well-being of tenants and provide opportunities for diverse cultural exchanges.” Preserving Northside Downs and the Cape Breton Farmers Exhibition is arguably the better approach to facilitating these goals, while also keeping an agricultural tradition alive.

“We are planning on a regular full season for the first time since before COVID. We are starting on May 14 and we run through to the middle of November,” said LeBlanc. “There should be a significant improvement in our livestream,” which will return to Canada’s Horseplayer Interactive ADW, with a new race day broadcast produced by PEI’s Universum Media. He noted that Northside’s usual 1 pm (Atlantic) Saturday post time would remain in effect.

There is more than symbolic importance to Northside’s survival. It’s a longstanding incubator for talent, including 2020 O’Brien Horse of the Year Century Farroh (p,1:49s; BT1:47.3m; $1,557,016) , who trained and qualified there with local owner/trainer Dave Ratchford.

“Out of our small population, we’ve had a number of good young horses who have went to Ontario and beyond in the last 10 years,” said LeBlanc. “A couple of young drivers, Colin and Dave Kelly, started their careers there.” Both are likely participants in the upcoming 2022 Canadian Regional Driving Championships, representing Ontario and Western Canada, respectively.

A grateful LeBlanc praised the Cape Breton-Richmond Federation of Agriculture’s decision to prioritize the local racing and exhibition communities over profit.

“Really, I have to give them credit, that they did actually turn down higher offers and that shows their commitment to the property staying an agricultural property,” he said. “Being able to sustain this property… There’s no other option for racing outside of Northside Downs… There’s nowhere else for us to go. [Losing the track] would be huge. We’re business as usual now. In general, we feel very positive about the future of Northside Downs and its current new purchaser does have plans to keep operating the racetrack going forward.”