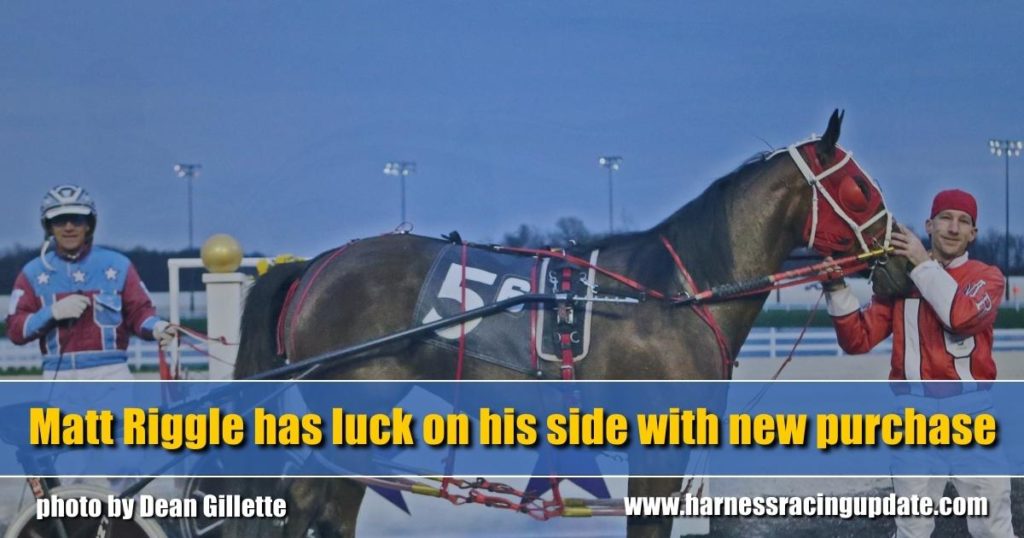 Matt Riggle has luck on his side with new purchase

As activity leading up to the opening of Harrah’s Hoosier Park Racing & Casino shifted into gear in early March, horseman Matt Riggle searched for a young prospect to add to his small stable. With only one pupil ready to race – and later claimed opening weekend – the owner/trainer needed another option. He took a chance on unraced sophomore Lucky Lil Lady, and the filly has quickly delivered two victories, the latest an impressive off the pace effort Thursday (April 28).

“I purchased her from LeWayne Miller. He put her up for sale after he qualified her. I’m just guessing he thought she probably wasn’t going to be a stake horse or top horse like that,” Riggle said. “I only had one horse racing, and he was claimed the opening weekend at Hoosier. I had a trotting filly I was getting ready. She had not qualified yet. And I had a 2-year-old I was getting ready. So I didn’t have any racehorses, and I was looking for something. She’s not the biggest filly, but she can cover some ground. She’s got a great attitude. Everything has worked out so far with her. I don’t know how far she’ll go, but she’s still learning.”

Dean Gillette Matt Riggle (at the head of the horse) after Lucky Lil Lady won on Thursday at Harrah’s Hoosier Park.

Despite her lack of racing experience, Lucky Lil Lady has shown flashes of talent, particularly in how she closes out races. In her March 9 qualifier for Miller, the filly finished last in a field of six, yet paced a :27.1 last quarter. Two weeks later, she won a qualifying effort in 2:01, coming home in :27.2. Making her debut in a division of the Rosie Harness Memorial, Lucky Lil Lady wired the field to win by a head in 1:55.1, kicking home for Sam Widger in :27.3.

“I figured I could teach her a thing or two, take it easy on her. She was super impressive her first start. I was really happy with her,” said Riggle. “She got in with some pretty tough horses there. Her start before this last one she got scorched and parked the mile.”

Third her next time out, the Luck Be Withyou—Diorama filly missed the board in consecutive starts that followed, pacing sixth and ninth. In her last attempt on April 21, the sophomore was parked the entire mile after a lively :26.3 opening panel. She finished last for Riggle.

“Last week when she got parked, Sammy tried leaving with her. She had a horse on the inside of her and outside of her. To me, and Sammy thought so too, she just got a little panicky and wasn’t sure what to do. She had never left that hard off the car. They went a quarter in 26 and change. She got a little fumbly and he had to gather her up and ended up parked the mile,” the trainer commented.

At 41 years of age, Riggle has become accustomed to taking the castoff horses from larger stables and turning them into racehorses. He desired to make a career of racing horses from a very early age. His aspirations stemmed from watching his grandfather, Henry Carter, campaign horses throughout the years. Carter provided his grandson the opportunity to work with his stable as Riggle grew and matured.

“I’ve been doing this since I was five years old. My grandpa got me into it and I never got away from it,” he shared. “He always had a couple, one or two. He always had racehorses, always something for me to fiddle around with. The older I got, he just let me take the reins with it and he supported it and I just went and raced them. It’s always been my passion.”

Growing up in the Mishawaka area of northern Indiana, Riggle didn’t immediately jump into racing when he graduated from high school. He worked in the mobile home and recreational vehicle factories that are plentiful in the region, biding his time and putting away money. His grandfather had given him a broodmare, and Riggle waited for the first foals to reach racing age. Once they were ready, he quit his factory job and shifted his focus to racing.

“I stabled at Balmoral for almost three years. Back in my early 20s I had anywhere between 10 and 12 up there. I’ve been all over the place just trying to make it,” he said. “This business has ups and downs for a small stable when you don’t have money supporting you. My backup was always going back to the factories. If I had rough times in the horse business I just went back to work there, got back grounded, and tried again.”

Relentless in his pursuit, Riggle has pieced together back-to-back seasons that have allowed him to support himself and his family. In 2020, he sent out 13 winners with earnings exceeding $85,000. Last season, his 63 starters collected nine wins and almost $113,000 in purses. Dubious Claim, a son of Western Terror, accounted for five of those wins in 2021. Riggle also bought a JK Endofanera yearling in 2020 that he sold privately last June after her first start.

“I’m not in any position to turn down a decent amount of money, as much as I love some of these horses,” said Riggle, who moved less than an hour north of Hoosier Park to Warren, Ind. last year. “Being a small stable, it’s hard to turn down the dollars from the bigger guys, you know?”

After two tough outings, Lucky Lil Lady rebounded Thursday evening at Hoosier Park in a $7,500 conditioned event. Drawing post five in the 10-horse field, Widger ducked the filly and raced in the rear of the field through a :57.3 opening half. Rolling out of the last turn, the sophomore used the long stretch to her advantage. Once in gear, Lucky Lil Lady swept by the field to win by two lengths, dashing to the wire in :27.1 and stop the clock in a lifetime best 1:54.4.

“She can get home good. It was just a matter of whether she could maintain that speed throughout the mile or not and still get home in :27 when they started stepping up a little bit,” Riggle said. “She proved last night that she can make up a ton of ground if it needs to be. I’m not scared to duck her and race her off the back end of the mile until she learns to leave off the car.”

The owner plans to drop Lucky Lil Lady back in the same condition next week. Despite winning her second race of the season, she still fits due to earnings under $14,000. The filly will carry a claiming price of $17,000.

“Going forward, what she does, she might not go in for a tag. For right now I’m going to leave her where she’s at unless she shows me otherwise,” he said. “She’s already made $10,000 for me. It’s hard to replace one that races good. When I go down there, I go down there for the purpose of making money. For what I paid for her and what she’s in to be claimed for, if someone wanted to give that kind of money for her, I’m in the green.”

To date, Riggle has sent out three winners in nine Hoosier Park starts this season, with a second and third-place finish to his credit. He has a .432 UDRS and $18,250 in earnings a month into the meet, thanks in part to the success of Lucky Lil Lady.

“She’s been super. She’s an absolute sweetheart in the barn and just to race in general,” Riggle said. “I don’t know how good she’s ever going to be, but, hey, she’s a gem to me. Kind of like a diamond in the rough.”