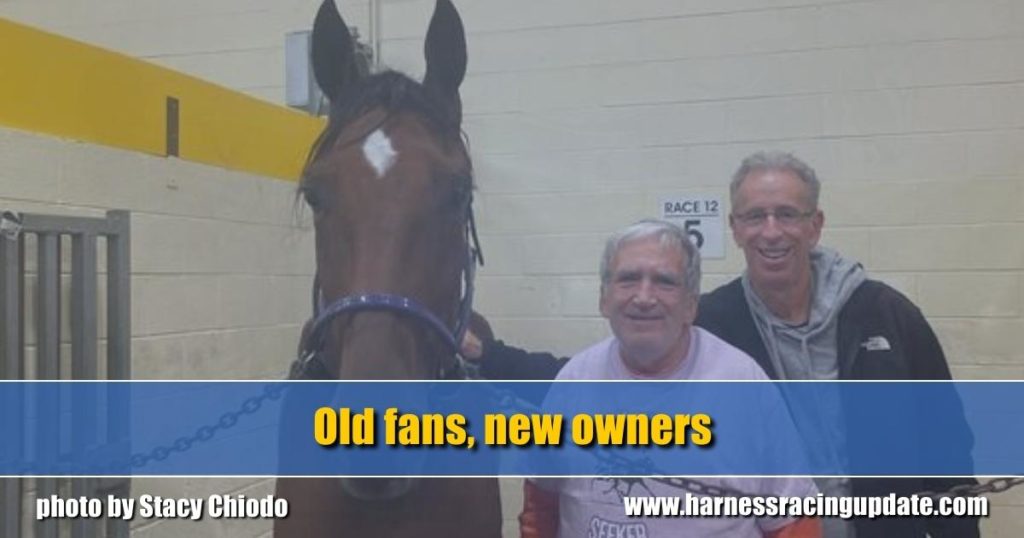 Fifty years after skipping out of Hebrew School to go to Brandywine Raceway, life-long friends Jeff Shore and Rob Barr are having the time of their lives as new owners in Stacy Chiodo’s stable.

Apart from finding that one great horse who makes millions, the best gift a dedicated harness racing trainer can hope for is finding great new owners who truly love the game. Conversely, the best thing potentially great new owners can find is an honest and talented trainer who suits them – even if it takes 50 years for the pairing to be finally realized.

Way back in the early 1970s, two kids from the Philadelphia area, Rob Barr and Jeffrey Shore, friends since junior high, nearly got themselves booted out of Hebrew School for skipping classes and heading to Brandywine Raceway. In a sense, the two boys jumped the racetrack fence; hoping to get a closer look at their real scholastic interest – harness racing.

Today with world champion woman driver Stacy Chiodo as their choice for trainer, Shore and Barr, still best buddies for life, decided to live out their dream of owning trotters and pacers. Why did this finally happen? Why did it take so long?

It took this long because the two kids who loved harness racing enough to ditch Hebrew School, had to grow up and get real jobs with guaranteed incomes. Shore is a dentist who has been in practice for 40 years. His son and daughter are both dentists, as well.

“I love animals, but I love horses first and foremost. I especially admire standardbreds. It’s a way to relax and maybe make some money too,” said Shore.

“Along the way, I even bought a greyhound so that I could get an idea of what it’s like to be involved in a racing game. I also took a course in harness driving at Garden State Park. Rob and I did a lot of things together – anything to do with sports and especially horse racing. We loved to gamble, and we liked the action.”

Barr, a sports-obsessed bachelor, is a real estate appraiser who reportedly has seven televisions in his mancave, and each is tuned to one sporting event or another and any number of live racing programs. He wears shirts to the races, each with the name of the horse who is racing printed upon it. That’s what you call enthusiasm.

“My dad was a doctor, and that’s where I was headed,” said Barr.

I did a tour of St. Louis School of Osteopathic Medicine prior to admission, but when I saw a cadaver in an anatomy class, I knew that this was not going to work for me.

“Liberty Bell was my place to relax. After Brandywine and Liberty Bell closed, it got kind of quiet for several years, but when Harrah’s (Philadelphia) opened, Jeff and I started thinking about making a return to harness racing. So, we began looking for a horse to buy. We started looking online for horses for sale.

“Jeff found a horse with some nice past performances. She showed a mile in 1:55. For me, 1:55 seemed incredible. I come from a time when a 2:00 mile was a big deal and then came along the modified sulky and they started going faster.”

Modified sulky? When was the last time you heard that term?

The new owners in the Chiodo barn are throwbacks to the glory days of racing. Who says you need new blood in the game? The late Stan Bergstein should have conducted this interview, not me.

Keep in mind that Shore and Barr are not elderly guys running down their bucket lists. In fact, as far as age goes, they’re just 60-somethings, but harness racing’s clock has been running faster than theirs. It’s also important to remember how young they both were when they became acquainted with the sport.

So, how did this all come together? Well, it started with a telephone call – six of them.

Shore assembled a list of six trainers and got their telephone numbers.

“I didn’t know any of these trainers from a hole in the wall. For the most part, they were all friendly, but we didn’t connect for one reason or another. I think it was because most of them just saw it as a business thing. Stacy Chiodo was different because she liked our plan of being partners with her and she was genuinely informative and friendly. We thought it was a good idea to have Stacy as a third partner and our trainer because she thought it was a good idea too. She matched up with the way we wanted to do things at first, and she was very helpful.”

Since pairing up with the Chiodo barn, the new kids on the block have had as many as six horses on rotation. Chief among their team is the bargain filly Beach Crazy that Shore and Barr found on OnGait.

According to Chiodo, Beach Crazy not only earned some big bucks, but she made her presence known in some prestigious events. As a 3-year-old, she won the Pennsylvania Sires Stakes consolation, and she was second in the Adioo Volo. For now, Beach Crazy is the star of the barn, but there are others waiting in the wings. Included in the bunch is a 2-year-old named Stay Special, a filly by Stay Hungry that the guys picked out of the Harrisburg Yearling Sale.

“I took Rob and Jeff to that sale, and they had a blast,” said Chiodo. “I don’t think they’d ever been to one, but they had a great time looking at the babies. They were looking to build their stable and this was the best place to take them. They picked out some young ones and together we went over all their picks. I pointed out the pros and cons of some of the babies, but there were a few in their selections that I liked as well. So, with a process of elimination, we took one home and she’s training great. It’s too early to tell with babies. You really don’t know how good they are until they actually start racing.

“When the guys ask me a question, it’s not because they’re questioning my horsemanship or my opinion. They ask because they genuinely want to learn. It’s funny how they ask a lot of questions, but they don’t interfere. I appreciate that and I think it’s part of why we’ve had some quick success. Good owners, and I have other good owners too, build up your self-confidence and they bring out the best in the trainers they employ. I know this isn’t always the case with some owner-trainer relationships, but in my case, I find it to be the key to success.”

For now, Barr and Shore, with Chiodo giving them a leg up, have plans for the future of their stable. Their plans aren’t grandiose, but their love for the horses, their quick successes, and their sincere devotion to harness racing is all so vintage and so classic that one can easily picture them in the winner’s circle on Hambletonian Day. That’s the kind of thing that can happen when a new endeavor begins so serendipitously.

Shore is quick to remind himself that he and Shore should not become spoiled because of their quick success. They both know that every horse they pick out of a sale is not going to be a quick cha-ching like Beach Crazy. According to the old buddies, their love for the horses is the most important thing. They sincerely love the horses they own and all horses in general.

“I love the animals. It’s fun to win, of course, but the horses mean the most,” Shore said.

“Being able to talk to my trainer and to learn about the horses is the best part of all of this. We don’t expect every horse to be a winner, but we know they’re all in good hands,” said Barr.