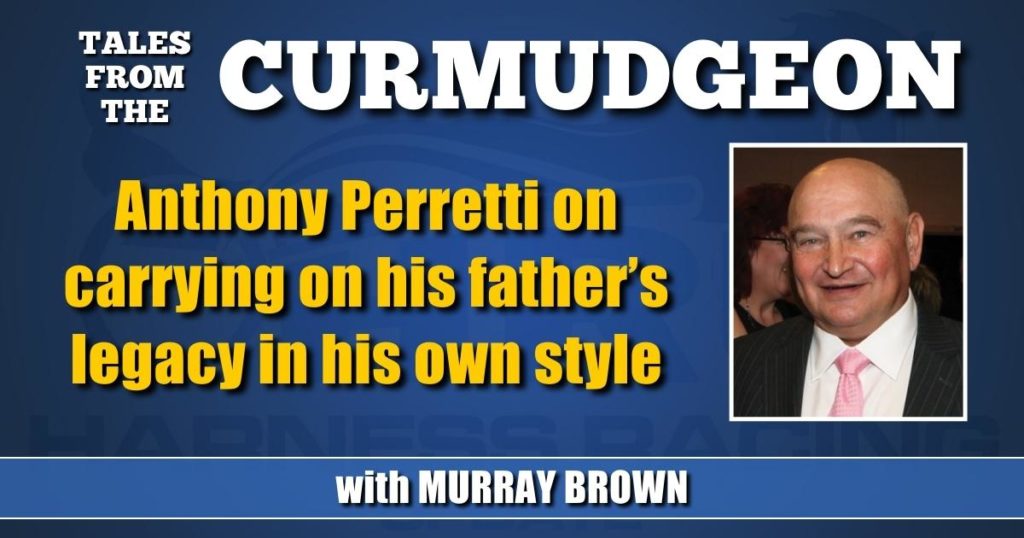 When on hears the name Perretti, one’s thoughts would almost always go to the late Wild Bill, the colorful founder and owner of the famous Perretti Farms.

This story will sometimes reference the senior Perretti, but will focus more on his youngest son, Anthony, who in his own way is making a mark in harness racing.

Anthony Perretti was born in Bethpage, Long Island, but has spent most of his life in New Jersey, with some intermediate stops in sunny California and Florida.

Anthony’s career in harness racing was not continuous. It began when he was 18 years old and his dad sent him off to work for John Campbell as a groom for his first lessons in the sport that was to become an important segment of his life.

“I suppose at the time I wasn’t ready for the day-to-day work that was involved with working with horses,” Anthony said.

At that time, Anthony had stars in his head — of the Hollywood type. He wanted to be involved in the entertainment industry. He moved to California where he enrolled in and graduated from the American Film Institute with a master’s degree in in their producing program. Thereafter, he produced independent films in Los Angeles.

In 2001, he received a phone call from his father. Bill Perretti had decided that he was going to get out of the harness racing business.

He was going to disperse his horse holdings, including the beautiful farm that he had built and established as one of the world’s foremost standardbred nurseries. He had planned to invest in other areas including, but not limited to car dealerships and restaurants.

Anthony had worked for his father in various automobile dealerships from 1982 to 1993.

As he was sometimes prone to do, by the time Anthony returned to New Jersey, his father had changed his mind. He had decided to remain in the horse business.

When Bill decided once and for all to get out of the automobile business, he brought Anthony to his farm in Cream Ridge NJ to groom him to become, in effect, his farm manager.

The senior Perretti had gone through many farm managers. For one reason or another, he found them wanting in what he desired.

He would groom his son to manage the farm. He would then have someone he felt he could trust.

It was at this point in Anthony’s career that this discussion begins.

Here you are with no farm experience, relatively little history with horses and you are placed in charge — with the exception of your father — of one of the major standardbred breeding farms in the world. What did you do?

“I believe there were three large components of any success I had with working at the farm: 1. I think that one of the key prerequisites of success in any venture is in not only knowing what you know, but also perhaps more importantly, in knowing what you do not know. In my case that was quite easy. I didn’t know very much about the inner workings of a standardbred breeding farm. But I was eager to learn — make that anxious to learn.

“2. I had great teachers, chief among them were Bob Marks, Dr. Peter Boyce and Dr. Beryl Taylor. Bob Marks was with my dad from the very beginning of the farm. It’s my belief that without Bob’s knowledge the farms might not have achieved the success that it did — certainly not to the degree of success that it attained. Dr. Boyce was an expert, the best that I’ve known in both equine reproduction and in judging the conformation of a horse. Bob, Dr. Boyce and Dr. Taylor were very willing to share their knowledge with this neophyte. I think that knowledge is much more easily attained when one learns from the best. I was privileged to have been in that situation.

Tell us a little about your dad.

“First and foremost, he was a brilliant man. He had the ability to discern opportunity. When it presented itself, he wasn’t afraid to pick up the ball and run with it. Maybe, contrary to the opinion of some, he would place great trust in those that he had working for him. He believed strongly in the best of everything — from the physical appearance of the farm itself, to the people that he had working for him and especially to the horses that inhabited the farm. He demanded excellence and would settle for nothing less. He never gave in to adversity. I think the most important thing I learned from him was to never give up. There were times where he was down because of business adversity only to get up and become more successful. He would strive for success and sometimes by the sheer force of his will, he would rise to the top again.”

“I purchased a 74-acre parcel of land contiguous with the farm from the William J. Perretti estate. My goal at the time was to use this to establish a boutique farm where I would breed and raise a small group of yearlings that I would offer for sale each year. However, fate intervened. In 2019, a 64-acre farm that had belonged to the late Michael Parisi became available. Its location presented an ideal opportunity. It presented the possibility of perhaps down the road establishing a stallion station there. Anthony Perretti Farms LLC sold the farm adjacent to the former Perretti Farm and bought Michael’s farm which is just opposite to White Birch farm.

“I partnered up with Joe Davino, Brad Shackman and the trainer Nik Drennan in owning horses.”

Please describe your interest with your horses and with your partners.

“It is somewhat involved. My partners and I now own 10 broodmares, five yearlings and are anticipating eight foals of 2022. In addition, we own five horses in training. They consist of three 2-year-olds and two 4-year-old mares. All of the horses in training are destined to become broodmares. They are trained by one of the partners, Nik Drennan.

“Joe Davino owns an 80-acre farm where the mares and their foals are domiciled. When the foals are weaned, they are moved to my farm where we raise them. When they are ready for sale, we move them to Fair Winds Farm, where they are prepped till sale time. Our yearlings this year will be sold at Harrisburg with Diamond Creek acting as agent in our behalf.

“In addition I personally own stallion shares in Always B Miki and Papi Rob Hanover. The group owns a share in Lazarus.

“I’m involved mostly in the breeding end of things, whereas my partners are mostly involved with racing.”

You also have what would be described as a day job.

“Yes, thank goodness for that. My wife Gloria and myself are both licensed real estate agents here in New Jersey. The real estate market is now booming. We are glad for that.”

There are several areas related to harness racing with which you have a significant involvement.

Could you please describe your duties with each of these entities?

“Perhaps I am a bit prejudiced, but I believe the SBOA of NJ to be the finest harness horsemen’s association in all of North America. It is somewhat unique in that it represents all segments of the sport and all its directors are involved and are contributors to the betterment of harness racing in New Jersey. I repeat everyone is involved and everyone contributes. It is a truly democratic group where all have a say and are heard.

“TrotPac is the political arm of the SBOA of NJ. I am its chairman. I view my responsibility as first and foremost to bring attention to all facets of the business in the state to our legislators. They include but are not limited to speaking before political groups and keeping in touch with these people upon which our fate lies. I have found that their two greatest concerns are the number of people directly or indirectly involved(AKA votes) and the number of jobs it represents. I hope that I am well suited to the position. I think I speak well and perhaps most importantly generally speaking, I get along with people.

“I’ve been a board member of the Hambletonian Society since 2010. I view a big part of my presence there as being able to address the needs and achievements of breeders everywhere, with particular emphasis on New Jersey. New Jersey is noteworthy, since the Hambletonian and the Hambletonian Oaks, the two most important stakes owned by the Society take place at The Meadowlands, harness racing’s premier track.

You’ve mentioned your affinity to show business. Are you still involved?

“I view show business as somewhat like harness racing, in that once you get it in your blood, you cannot get it out. I miss Hollywood. I am still involved in a minor manner working on some projects.”

How do you view the future of harness racing in general and New Jersey in particular?

“I’m not going to be a Pollyanna and say that all is rosy and perfect. We undoubtedly have our problems. In particular to me is the low attendance at live racing venues and the diminishment of race days. The lessening number of registrations is a concern as well.

“I do see an upswing in New Jersey. Purse money is up. New Jersey-sired horses are going for more money and have greater opportunity. Two of the world’s greatest trotting sires Muscle Hill and Walner call the Garden State their home. I’ll go back to what my father preached and lived by ‘Never Give Up.’”