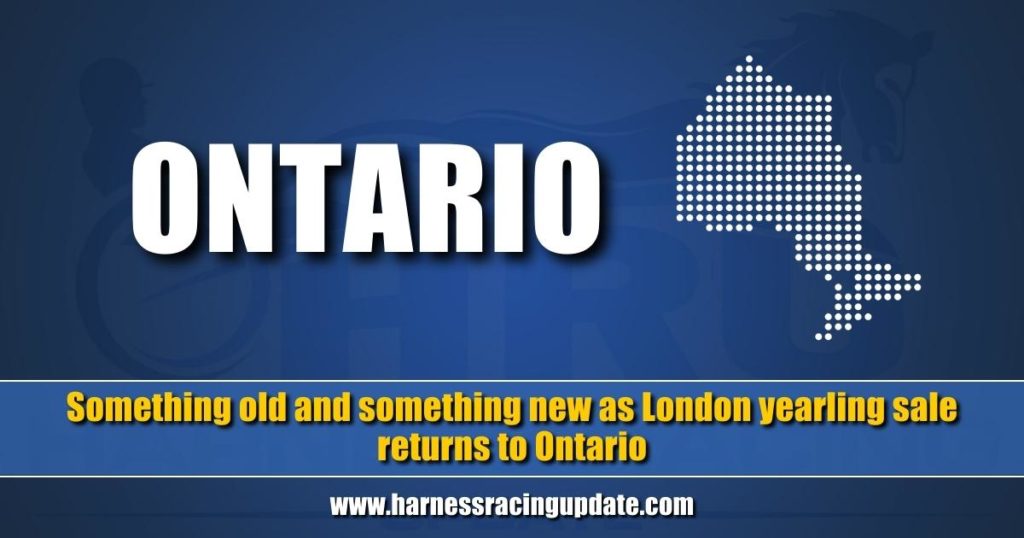 The London Selected Yearling Sale has been reborn as the London Classic Yearling Sale now under the stewardship of The Western Fair Association. Meanwhile, Winbak will continue having the Ontario Select Yearling Sale at its Inglewood, ON farm.

The London Classic Yearling Sale, to be held Oct. 18 and 19 at the Agriplex at The Western Fair District, is the latest incarnation of the old London Selected Yearling Sale held at that site.

What’s changed is the sale is now owned and operated by the Western Fair Association. Greg Blanchard, Western Fair’s director of sales and retail operations, has been named the sale’s general manager.

Blanchard said Western Fair took over the sale because it has, “a facility that is second to none, we’re an agricultural society and it fits with our mandate. Just wanting to show our commitment and support to the standardbred industry in the province is the main factor.”

Today (April 22) is the deadline for entries to the London Classic Yearling Sale, which will return to being a live auction. The past two years, the London sale was a virtual one due to the Agriplex being used as a COVID-19 vaccination site.

When that sale went online only, one of its ownership partners, Winbak Farm, opted to hold its own in-person auction instead at its Inglewood, ON farm. Thus, the Ontario Select Yearling Sale was born. While Blanchard said he had hoped Winbak might rejoin the London sale this year, Winbak Canada farm manager Pat Woods confirmed Wednesday that plans currently call for the third edition of the Ontario Select Yearling Sale to go ahead at the farm on Sept. 25.

“We had a good sale last year and we were happy with how things worked, so we just thought that we’d continue doing it,” Woods said. “Greg Blanchard and I have talked since December back and forth about plans and ideas. We’re not opposed to the London sale or what they are trying to do and we wish them all the best, but just for us it’s a little less shipping and we have the facility here. It worked for us the last couple years, so we just thought that we’d continue with it. It’ll just be kind of a year-by-year (decision).”

While Blanchard is an industry veteran who has worn many hats — race caller, publicist, TV personality, track manager chief among them — this will be the first time he has managed a yearling sale.

“As soon as I was approached about doing this, I got excited about it because of my long-time involvement in the industry. It’s a new area of the industry (for me). I haven’t worked intimately in a sales environment, so I’m just excited about working with all those folks on that side of it,” Blanchard said.

He said he has received a lot of positive feedback about an in-person sale returning to the Agriplex and believes the right thing to do is to put on a sale very similar to the London Selected auctions of old.

“Being that this is new for me, the last thing that I wanted to do was come in and try and make a bunch of changes and turn everything upside down,” Blanchard said. “My approach is to get a year under our belts and we’ll look probably pretty similar to a typical sale that’s been held there in the past.”

One big difference is the sale will be held on a Tuesday and Wednesday, as opposed to the weekend.

“Being there as a spectator numerous times, I could see myself how the energy would leave the building later in the day on that Saturday, as people started to leave and make their way up to Mohawk for Super Finals,” Blanchard said. “We likely weren’t getting all of the same people back the next day, either. That never sat right with me, so I picked the brain of a few experienced people in the industry and the feedback was that there would be a good reception to trying the weekday format. So, with the natural date in mid-October, that gets you in between Lexington and Harrisburg. Then, being a weekday, landed this year especially between the OSS Super Finals and Breeders Crown eliminations.”

Woods said the Sunday, Sept. 25 date for the Ontario Select Yearling Sale works well because the Mohawk Million will be held the night before at Woodbine Mohawk Park, which is located close to the farm.

“We have a great reputation and partnership with Woodbine when they host these great stake races,” Woods said. “They are getting the Breeders Crown back again, so when they have their richest night of racing it’s great and there will be a bunch of people in town. We’ll have the sale the next day, so people will come in and watch these great races and then they’ll come out to the farm. We’re 30 minutes away, so they’ll come out and look at the yearlings, bid, and hopefully take something home. It helps support our Ontario program.”

Woods said the Winbak sale is a chance to showcase the yearlings of four of the farm’s new stallions — McWicked, The Bank, Stag Party and the Jimmy Freight.

Currently, the sale will feature some 46 Winbak yearlings, plus some yearlings from other consignors.

“We’ve got Bettors Delights coming, Cheddars (Betterthancheddar), Archangels, MVPs, McWickeds, lots of Shadow Plays… one Sportswriter, one Hes Watching,” Woods said. “I do feel that we have an outstanding line-up of horses. From all indications of how those yearlings look for those four first-time stallions, they look every part of a racehorse. We’re getting a lot of good reviews from outside of our farm as well, from reputable farms letting us know that they love the way their horses look… The Stag Partys very correct. The Bank – nice trot, good moving. There’s a lot of talk about the McWickeds… I have a bunch of Jimmy Freights here at the farm that are foals, as well as the ones that we foaled out and raised last year… every indication is that they are very correct and good looking.”

Back in London, the Seelster Farms consignment will be one of the highlights, with more to be revealed after entries closed.

“Entries have been coming in steadily. I don’t want to let the cat out of the bag just yet, but I’m pretty excited when I see some of the youngsters that have been entered and the pedigrees that, I think, are going to be very well-received. So, so far so good,” Blanchard said.

Seelster has been the long-time leading consignor at the London sale and farm reproduction manager Ann Straatman is the former sale manager of the London Selected Yearling Sale.

“She will help me through the process because she’s had the experience,” Blanchard said of the transition.