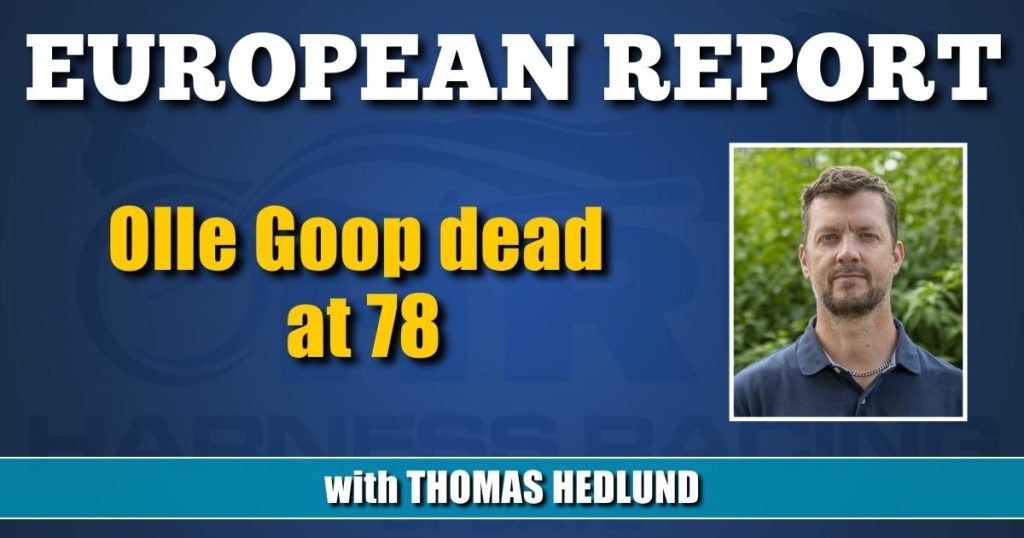 Olle Goop, one of the most merited trainers and drivers in Europe, died on Wednesday (April 20). He was 78.

Goop, the father of Björn Goop, won 7,696 races as trainer and claimed 66 track champion titles in Sweden as driver. Olle won 6,745 races as driver and he won several of the most prestigious races in the world.

Grades Singing was his most merited trotter throughout his career and with Conny Nobell, Olle won the Kriteriet, The Derby and Elitloppet as trainer in 2004-2006.

A good-hearted man has left this sport and it’s with tears in my eyes that I have to face the facts that Olle will no longer smile at us at the tracks in Sweden.

Olle will be missed by his wife Annika, his son Björn and the entire world of harness racing.

Delia du Pommereux will prepare herself ahead of the trip to Gothenburg, where she is the title defender in Paralympiatravet at Åby on May 7. The Sylvain Roger -trained mare will face some really good trotters in Paris this Saturday. Etonnant and Vivid Wise As (both invited to Elitloppet), will try to claim the big trophy at Enghien and the 12 horses strong field is top class.

The $150,000 Seinäjoki race over 1.3 miles is scheduled in Finland on Saturday afternoon (April 23). Ten trotters, five from Sweden and five from Finland will battle for a free ticket for the 3,140 meters Harper Hanover’s race at Solvalla during the Elitloppet weekend.

Swedish trained mares Dear Friend and Kali Smart were mentioned as the two big names in the race, ahead of the draw. Dear Friend will start from post 9 while Kali Smart have to face the stride from number 10.

Seven-year-old Canadian trotter Perfetto (Majestic Son) became the sixth horse to get an invitation for Elitloppet 2022.

Perfetto has been mentioned as one of the best older colt/geldings in Canada two years in a row and he finished third behind Lindy The Great and Forbidden Trade in last year’s Maple Leaf Trot.

Dagfin Henriksen trains and drives Perfetto, who will join Back Of The Neck on the plane from America in May.

HORSE INVITED TO THE ELITLOPPET

Back Of The Neck – USA

Vincennes’ race card on Saturday (April 16) featured some high staked races and some impressive performances were made on the black track of Paris.

Happy Valley (Royal Dream) claimed her seventh win in her last eight starts when she flew to victory in the $130,000 Prix Henri Levesque. Driver Jean Philippe Dubois noted that leader Heliade du goutier was captured in perfect time ahead of the wire and 5-year-old Happy Valley came home in mile rate 1:57.1 over 1.6 miles.

The 5-year-old colts battled in the $130,000 Prix Robert Auvray and Hooker Berry (Booster Winner) was outstanding since Jean-Michel Bazire hit the lead with half a mile to go. Hooker Berry jogged to a safe win in 1:56.2 over 1.6 miles ahead of Have A Dream and Hip Hop Haufor.

Fabrice Souloy-trained Ampia Mede Sm (Ganymede), bred in Italy, disarmed leader Decoloration from outside position in $97,500 Prix du Treport and by that claimed her third win for the year.

First choice Who’s Who went off stride in the first turn when the second elimination for the $315,000 Paralympiatravet was held at Romme racetrack on Sunday (April 17) afternoon. The disappearance of Who’s Who opened up for Daniel Redén-trained Born Unicorn (Raja Mirchi), driven by Björn Goop, who made a strong first over performance as he claimed a spot in the final at Åby on May 7.

The next elimination is held in Halmstad on Saturday (April 23) and Danish harness racing’s new star, Extreme, is the horse to beat, even if he’s already in the final at Åby since trainer Steen Juul received an early wild card for the race. The 6-year-old Chocolatier son Extreme is also invited for the Elitloppet at Solvalla later on in May.