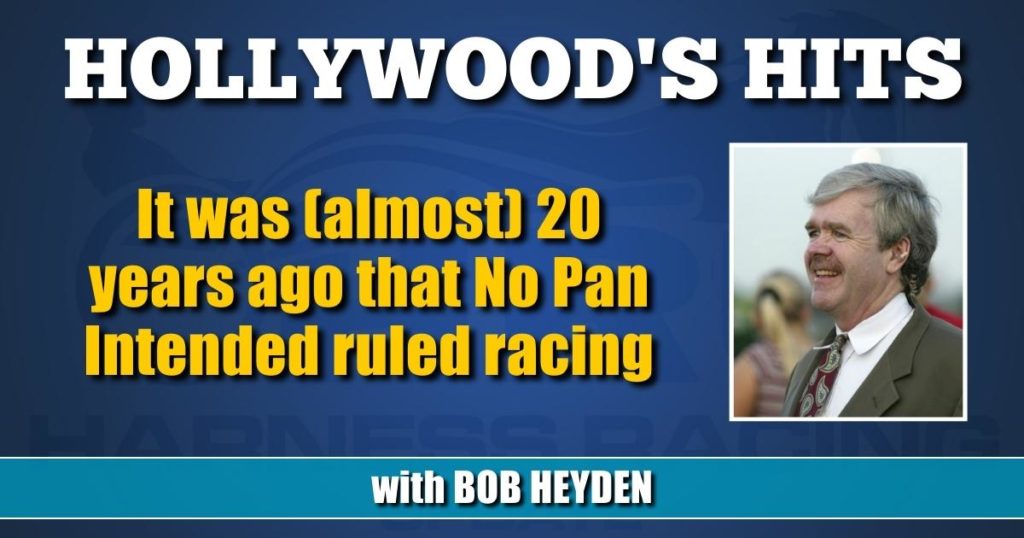 David Miller drove for Ivan Sugg and the Peter Pan Stable. A son of Pacific Fella — a grandson of Cam Fella — No Pan Intended did not race in the North America Cup and was fourth in the Meadowlands Pace the only time all year he missed the board.

No other active driver not named David Miller has won a Pacing Triple Crown.

Twelve times No Pan Intended was the odds on favorite in 2003. He was 21 17-3-0 for the year, but in an oddity, in those three losses none were even close:

5 1/4 lengths to Whatanartist in the Meadowlands Pace elimination (1:49 for the winner)

No Pan Intended was actually second-placed-first in the Art Rooney ($273,983).

He was a son of Classic Wish, a Hall Of Fame broodmare. His lifetime mark of 1:50.3 came the last time he ever was on the track over Escape The Wind. His highest odds in any race was 8.20-1 in the Meadowlands Pace. When he won the Jug, that was one of 10 wins on that memorable day for David Miller in his home state.

Will 2022 be the year of a David Miller Hambletonian breakthrough? He will be 57 on Hambletonian Day, but, remember, Billy Haughton didn’t get the Hambletonian ball rolling until he was 50 and then couldn’t be stopped. He won in 1974 with Christopher T, 1976 with Steve Lobell, 1977 with Green Speed and 1980 with Burgomeister.

UPDATES ON RETURNING STARS AND UP-AND-COMERS

Brett Pelling on his Horse of the Year Test Of Faith: “She never seems to have a bad day. Her first start is in the Graduate the first week of May.”

Never has a female pacer been named HOY back to back.

Jack Darling on Bulldog Hanover: “He’s doing great. Training back very strong and is going to the breeding shed every Monday-Wednesday-Friday. He’s a happy horse.”

Lucas Wallin had a breakthrough season in 2021. A former aid to the Svanstedt Stable, he said he is looking forward to the stakes season this year. “Rebuff and B A Superhero I am really high on,” Wallin said.

Here’s my Horse of the Year favorites for 2022:

WATCH OUT FOR THIS ONE

Seaside Hanover was unraced at 2. He debuted at Hoosier Park with a fourth on March 31. It may not be possible to be fourth in a race and be any more impressive that he was that night. He then romped in his follow-up for owners David McDuffee and Lee DeVisser. Melanie Wrenn trains and Peter Wrenn drives. Remember this name.

NOTHING AVERAGE ABOUT THESE TWO

CAN YOU TOP THIS?

Redskin set the all-time 2-year-old earnings mark of $1,407,263 in 1986 that has stood now 36 years. Yet, he had 10 different drivers and six made the Hall of Fame: Chris Boring, Bill O’Donnell, Mike Lachance, John Campbell, Ron Waples and George Sholty.

The other four were Lucien Fontaine, Ricard Wojcio, Mickey McNichol and Lavern Hochstetler.

It’s a long way from veteran trotter Indianapolis helping put Brennan’s name out there in the winter of 1994 at the Meadowlands. It wasn’t long at all before Brennan showed that he could handle the major stakes scene taking the 1995 Woodrow Wilson with A Stud Named Sue and then in 1996 the Meadowlands Pace with Hot Lead. It was Brennan’s debut in both races.

Now here is a guy you probably wanted to follow around back in the middle of the 20th century: Hugh Grant. He once said, “The best investment I ever made was in Del Miller.”

The Grants, from Bradford PA, sold the family oil business in 1948 to Pennzoil, though Hugh was still in the business holding properties and oil leases in Oklahoma, Texas and Florida. Son Andy Grant followed him at Georgetown.

Hugh tinkered with thoroughbreds, too. His best early buy was Adios Betty, the first 2-year-old filly to be clocked in 2:00.

He loved the breeding end and in 1975 said, “I get more pride now from what I breed than when I win.”

In 1963, he sold Meadow Skipper to Norman Woolworth for $150,000 as a 3-year-old. He never regretted the sale and was more than happy for all the success Meadow Skipper achieved. Meadow Skipper is one of the sires in which Hugh had shares. He also had shares in Albatross, Super Bowl, Nevele Pride and Most Happy Fella.