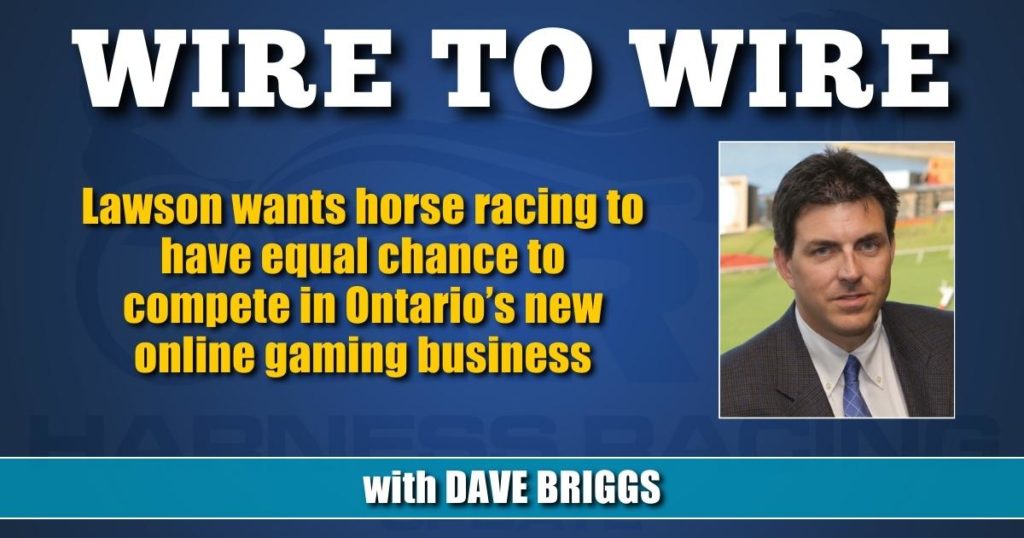 The CEO of the Woodbine Entertainment Group warns the launch of an online sports betting
and casino market in Ontario is a threat to horse racing and its 25,000 jobs in the province.

He’s not complaining, not looking for special treatment for horse racing. Instead, he simply wants an equal chance to compete in Ontario’s new online gambling sector, which launched Monday (April 4).

The head of the largest horse racing operation in Canada admitted he’s frustrated that hasn’t happened.

On Monday, the province launched its open online sports betting and casino market. As of Wednesday, there were already 14 operators taking bets in Ontario.

Ontario’s horse racing industry supports some 25,000 full-time equivalent jobs and races are conducted at 15 tracks in the province. Yet, horse racing is “stuck in the starting gate” on two fronts, Lawson said:

Horse racing has yet to be integrated as online betting content on the platforms of Ontario operators. Also, Woodbine is, so far, prevented from setting up physical sportsbooks at its teletheatre locations in the province.

“We’re not looking for exclusivity, we not looking for protection. We just want to be part of it,” Lawson said. “On the integration side, all we’re asking is let (operators) host our product.”

Lawson said that integration would be seamless even though horse racing’s pari-mutuel system is a very different gambling animal.

“The only restriction in the criminal code is betting on horse racing has to be pari-mutuel. Our technology would allow us to integrate our content into their platforms and still keep it pari-mutuel, still keep it within our tote system. It would just be seamless to the customer,” Lawson said.

Despite being left at a standstill as online gaming is set to tear up the track, Lawson said he remains hopeful that horse racing will soon be included in the new market.

“I want to be optimistic and say it will happen in the next two to three months, but we’ve certainly been left behind, unfortunately, and it’s not from a lack of hard work,” he said.

Lawson said it’s not a case of operators not wanting to offer horse racing.

“Companies like FanDuel, William Hill, bet365, PointsBet, they all had their origins in horse racing,” he said. “So, they like horse racing, they like offering it to their customers, it’s what they do. We have understood almost from the beginning that they were all very interested in horse racing and if they wanted it they would have to buy it from Woodbine. That was the premise, which we’ve been advancing.”

He chose not to elaborate on why horse racing has been left out, so far, but did not blame the operators.

“They were anxious to work with us on an operating agreement and host our content on their platform, which would have been great for racing because it would have been huge exposure for it.

“Of course, I think it hurts us that we’re not out of the starting gate with everyone else. Having to add it later on is not ideal for us, but we are where we are.”

Lawson said there is clear evidence in other jurisdictions that sports betting steals horse racing punters.

“We’ve been consistent in expressing this concern that the clear evidence is that sports wagering is going to hurt or cannibalize the pari-mutuel wagering dollar,” Lawson said. “That shouldn’t surprise anyone. There’s a big overlap in the demographic.”

The problem is those pari-mutuel dollars support a huge industry in Ontario, one deeply rooted in the rural areas of the province.

“There’s a huge rural component. The numbers have been studied and looked at by the academic community on behalf of the horse industry… There’s no question the number is in and around 25,000. What people don’t realize, I don’t think, is there are 15 racetracks in Ontario alone. There are more racetracks in Ontario than any single state in the United States or any province in Canada.

“(The industry has) a huge economic impact, a huge rural component to it because of the nature of the industry. It’s very labour-intensive and these are on farms.”

Lawson stressed many of those that work in the horse racing industry are skilled workers. Unfortunately, it’s often a very narrow skill set.

Greg Blanchard is the director of sales and retail operations for The Western Fair District in London, ON. The agricultural hub in the centre of the city is also home to a half-mile harness horse racetrack. Blanchard said the track provides a wide range of employment in the rural areas surrounding London.

“At Western Fair, we’re right in the heart of horse country in this part of the province. There are training centres, there are private stables, several high-profile commercial breeding farms in the area. A lot of jobs dependent on the horse racing industry,” he said. “We’re a sizeable industry that contributes a lot to the province and we certainly want to be able to make sure it remains vibrant.

“As a smaller track, we share the concerns of Jim (Lawson) and the folks that have been working hard on this on behalf of the industry. There’s going to be a lot of these major companies market heavily. You’re going to see the (sports betting) business likely explode in Canada. That could, obviously, be a challenge, but it could also be an opportunity. So, we’re hopeful that racing will be able to take part in this arena or this space in a meaningful way.

“If that happens, it could, in fact, be an opportunity, because I’ve long believed sports bettors and horse bettors are of a similar mindset. There are a lot of synergies between the two… I think there could be some exciting possibilities, potentially. If not, it’s a challenge.”

One of the biggest challenges comes in the form of marketing. Horse racing can’t compete with the marketing budgets of the major sportsbook and casino operators.

“We’ve been told about some of their budgets,” Lawson said. “Many of the big ones are targeting $75 million each of marketing spend in this province over the next 12 to 24 months. We won’t be able to keep up and it’s going to hurt us.”

“We’ve got a number of major wagerers. We all know that a big portion of our wagering is made up of our major wagerers and they’re also sports bettors. Now that they are going to be able to (bet sports) legally in Ontario and now that there is going to be an onslaught of information and marketing coming at what has historically been our customers, it’s going to hurt horse racing.”

Lawson said he had hoped that Woodbine might be able to compensate for the aggressive marketing spend of operators by being allowed to set up physical sportsbooks at a number of its prime teletheatre locations. Instead, that has not, yet, come to fruition.

“Physical is disappointing, again. Not to throw darts, but it’s more an OLG (Ontario Lottery and Gaming Corp.) matter in management and control. The AGCO (Alcohol and Gaming Commission of Ontario) is responsible for the online.”

Lawson’s concern is that physical sportsbooks will only be allowed in casinos and not with Woodbine, which has extremely deep Ontario roots.

“I’m really, really surprised that, seemingly, the preference right now is with foreign casino operators rather than an Ontario-based, non-profit company that’s going to support an industry with 25,000 jobs. It makes absolutely no sense to me and I’m hoping we get over that in the next few months.

“We’re not looking for anything special on the retail side… We are fine if the casinos have sportsbooks. We’re fine if the retail stores have it. We just want to have an open market and let us participate. Right now, we’re not able to on either the integration side or the retail sportsbook side.”

One of the challenges for horse racing is the pari-mutuel system. A bettor can place a wager on a horse at one price. But, as other bets come in, the odds on that already-placed wager can change. That’s a difficult concept to explain to new horse bettors familiar with fixed odds in sports betting.

Lawson said he would like to move horse racing to a fixed-odds system, but wants to be very careful about how it is done.

Horse racing relies on the cut it receives from pari-mutuel racing to fund an extremely expensive form of gambling. Racehorses cost a lot of money to acquire, train, feed and keep. Race purses are derived from the track’s take of pari-mutuel wagering. Fixed odds wagering tends to have lower margins. The danger is a lower take for the track leads to lower purses which drives many out of the game of racing horses.

That said, Lawson knows fixed-odds is the future for horse racing and he wants to embrace it.

“We would be supportive of fixed odds because I think it’s going to be what the next generation of horse racing fans is interested in,” he said.

If that happens, Lawson said it is essential that the tracks be able to participate in fixed-odds wagering.

“If they allow fixed odds you must have the pari-mutuel license holders participate,” he said. “You can’t just say, ‘Okay, sports betting operators, you can now offer fixed odds in horse racing’ because that would surpass pari-mutuel and we’d be left out in the cold. It would put us out of business. So, they have to come up with a framework and a financial structure that allows fixed odds, but they can’t destroy the horse racing industry.”