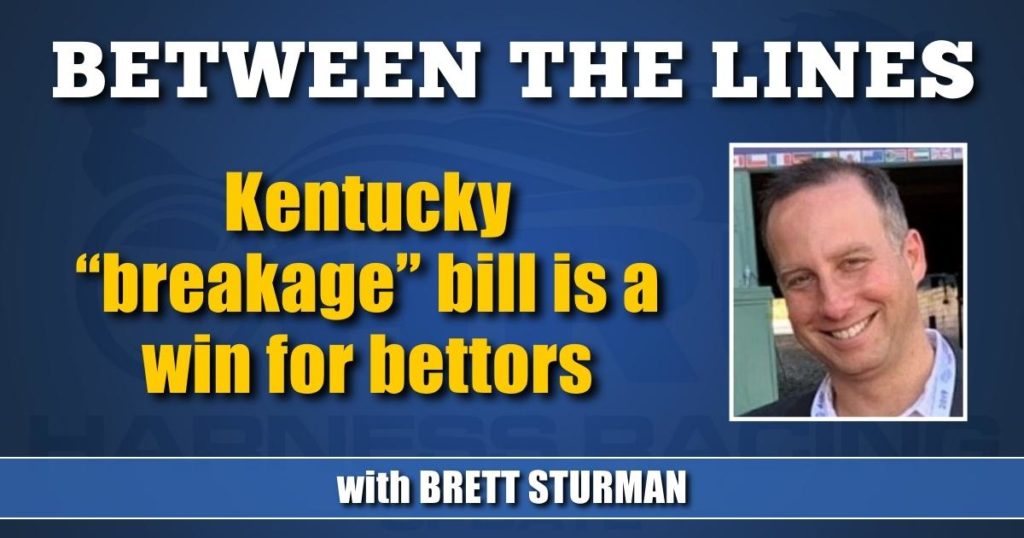 Kentucky “breakage” bill is a win for bettors

This past week, the Kentucky Senate overwhelmingly passed a bill that’s widely seen as a win for horseplayers. Known as HB 607, the bill includes a provision that essentially eliminates the long-outdated concept of breakage.

The bill passed through the Kentucky House in March and now following minor procedural steps, is expected to be sent to Governor Andy Beshear where it will be signed into law. Depending on timing, the bill could go into effect towards August, around the same time that the 2022 meet at the Red Mile is underway.

Either when the Red Mile meet begins on July 31 or shortly thereafter – and with more certainty by the time the Grand Circuit begins on September 30 – the way race payoffs are calculated and distributed at the Lexington KY harness track will be different as it will be with all thoroughbred tracks in the state. Rather than wagers paid out rounded down to the nearest 20-cent increment for $2 based wagers, payouts will be rounded instead to the nearest penny of the true calculated payout.

As with many other jurisdictions that round breakage to the lowest 20 cents, a horse today that wins at 2-1 odds could hypothetically be calculated to pay out $6.5617. But with the 20 cents breakage format, the actual amount paid out would be only $6.40. The difference is retained by the entity taking the bet, either a track or online wagering service. Now, with HB 607, the true amount of $6.56 would be paid out in full to the bettor, rounding down to the closest penny instead of 20 cents.

It might seem like we’re talking about insignificant numbers, but anyone who’s seen the film Office Space knows how fractions of pennies can add up. Across both the standardbred and thoroughbred industries, current breakage rules equate to tens of millions of dollars a year. And for an individual bettor, the impact will be noticeable as well.

At the high end of the spectrum, a horse that is 3/2 odds and pays out $5.00 for a $2 bet, might have paid $5.19 if not for the breakage. For a $20 wager, it comes out to the difference of $1.90 and for a $200 wager it’s a difference of $19. Multiply this out by however much you personally handle over the course of a year and you can see that it becomes much more material than simply small rounding. For horseplayers who continue to deal with takeout rates that exponentially exceed takeout rates from emerging gaming competition, the breakage win is at least a small dent into the built-in disadvantages horseplayers have before they even place a bet. Returning money back into the pockets of where it rightfully belongs is a huge positive, and in the process, it will incidentally help to drive handle.

The move in Kentucky will make that state the first to move to a penny breakage, and in the process will exceed states like New York that already have in place more favorable breakage rates. In New York for example, the breakage model is calculated to the lowest 10 cents rather than 20 cents. Which is why at harness racing tracks currently running such as Yonkers and Saratoga in addition to NYRA thoroughbred tracks, you see payoffs ending in odd-numbered amounts ($3.70, $5.30, $4.10, etc.).

It remains to be seen if other states have any desire to follow suit, but in the meanwhile, this is a rare win that should be celebrated by horseplayers and enthusiasts alike from both breeds.

Last Saturday, Woodbine Mohawk Park was able to reach $1.5 million in new money during a highly publicized mandatory payout in its Hi-5 wager. And it did so with some friendly help from a fellow track, the Meadowlands.

As described by director of standardbred racing at Woodbine Entertainment, Bill McLinchey, “It’s just another example of tracks working together and having races go off at opposite times. That (mandatory jackpot) race, our goal was to have it go off at 11:30. And at that point, I was focused on our product and the post parade and it was then I received a call from Michael Antoniades at the Meadowlands and said that they have a late scratch and for us to add some time if we could. And thank goodness he did because we could have ended up right on top of them which could have been a disaster. I know the horsemen were probably wondering what we were doing but it was really to avoid the Meadowlands and just trying to get the simulcast board to ourselves. That includes wanting to make sure TVG was on us, so staying off the Los Alamitos signal as well.”

When the coordination was updated, the Meadowlands’ final race went off at 11:23 and Woodbine Mohawk trailed nicely thereafter at 11:36. “Because of that, we were expecting $1.5 million Canadian in new money and that’s what we got,” said McLinchey. It worked out for all sides, because I’m sure the Meadowlands wouldn’t have wanted their last race going off at the same time as another track with $1.5 million wagered on a race there.

The case study proves once again the simplistic yet successful formula of extending post times and coordinating to not be on top of competing signals. It’s shown that Woodbine can continue to have successful Hi-5 mandatory payout nights without having to extend the races as late as possible.

“When we first started doing the mandatory payouts and didn’t realize they were going to be as successful as they were, they were going off at midnight,” said McLinchey. And we kind of thought that worked well because we had the simulcast board to ourselves. But right now, with an earlier post time starting at 7:00, it wasn’t feasible to drag it out that long until midnight, and nor do we have to if we work together and coordinate.”