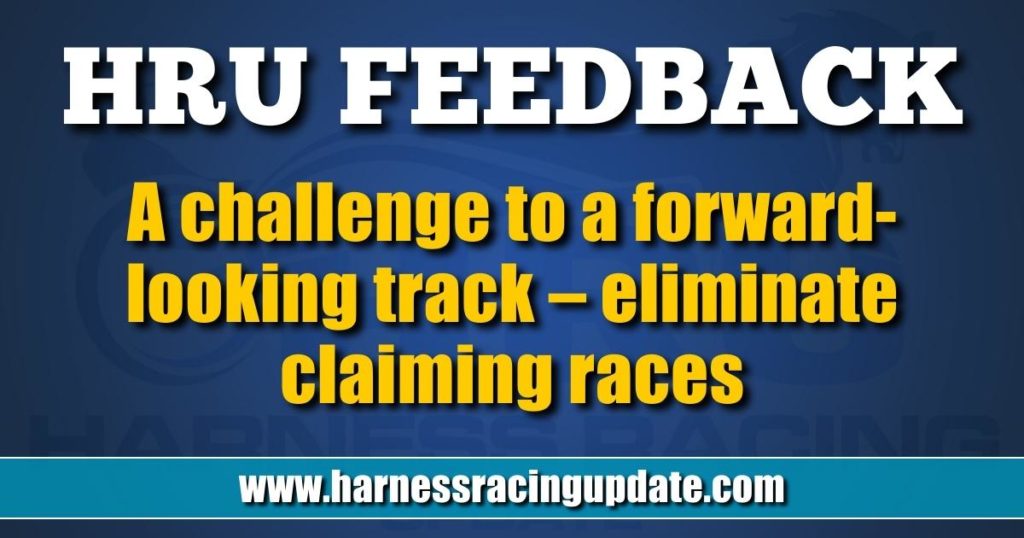 A challenge to a forward-looking track – eliminate claiming races

I would like to challenge just one track to completely do away with claiming races. Claiming races were a brilliant innovation forcing economic rationality of the entrants which would by definition result in the most competitive races. However four major factors challenge the logic of continuing to offer such races while there exists superior ways to write more competitive races, which will be addressed later.

At this point in our industry’s possible life cycle, I think it is time to experiment doing away with claimers for all of the above reasons. Racing secretaries can use the NW$ last x races to field somewhat competitive fields as they have done. However, the TrackMaster rating system, which gives each horse a rating based on its overall level of competitiveness, allows secretaries to write the most competitive races without the yo-yo issues of the non-winner races. More than 60 per cent of tracks have already used these ratings in some fashion, and studies have proven these races to be more competitive (based on frequency of odds on favorites, frequency of long shots, and spread of odds) than those of the non-winner varieties.

I would like to see a major track rise to this challenge and dispense with writing any claimers and use the other tools available to write competitive races. Then after a full meet, compare handle numbers, but more importantly, measure how competitive these races were compared to claimers from prior meets. There are so many variables that can affect handle year over year, but the other metrics mentioned above would give excellent insight to see if the races are just as or more competitive while simultaneously addressing the four big negatives mentioned above associated with claiming races.

We will tell you the end of the story because it has a happy ending. We got the call March 7, 2021. He was in a kill pen in central Pennsylvania awaiting shipment to Canada. Had we ever owned him? Yes we did till he was 10 and yes we wanted him back although, at the time, we had no clue as to how we would deal with him, find a place to keep him and provide care for him. He will probably outlive us so he is in our will.

We bought him as a 2-year-old in 2010, the second horse we ever owned, club foot and all, raced him nine times as a 3-year-old, won serious money with him in Delaware, then found he had stifle issues, probably had had them all his life, and raced through them as long as he could. His driver described him best. “A thousand pound horse with a thousand pound heart.”

We took him to the best vets. Could he ever race again. Sure, till he was crippled.

Not going to happen, we told the vet at the University of Pennsylvania clinic. He remained with us till 2018. We jogged him a couple of times a week. And we both enjoyed it. He shared a paddock with a retired race horse and they had a grand time together till his field mate died of colic.

No one wanted him in their paddock. He was too spirited and would run the hell out of their horses.

Horses are herd animals and they like company. He had none. I had back surgery, jogging was out. Stall bound most of the time was no life for him so my wife, who I think loved him even more than I did, made the painful decision to sell him to what we believed was a good home. Why sell? Our theory was if you pay for something you will value it. Free involves nothing obligatory.

Do we know what happened to him between September of 2018 and March of 2021? We know COVID happened. Who knows what circumstances his owner found himself in. His cost-benefit analysis caused him to behave in a certain way and treat his animals accordingly. How many times was he sold? Was he fed properly, overworked, given proper medical care? Feel free to add to the list. You all know what can happen to retired racehorses.

So we got the call. He quarantined at a facility near Shippensburg, PA, got wonderful care from a placement arranged by the Standardbred Retirement Foundation, and came home to Dagsboro, DE in late April, thin, dull eyed, no top line, bad teeth, and defeated by life and the cruelty it bringers to victims.

A year later, he is back to being his wonderful self and brings great joy to us, our grandchildren and our friends and neighbors who proudly wore his celebratory tee shirts and joined us in the winner’s circle to cheer his successes when he raced.

So it has a happy ending. Sadly there aren’t enough of them. Thank the Lord for the Standardbred Retirement Foundation, its amazing leadership and the many volunteers who facilitate hundreds of rescues and the people who donate to it. Does the USTA? Thanks goodness for freeze brands for that’s how we were identified and given the opportunity to rescue our horse. Are you listening USTA? Clearly you did not in your recent decision to make the process optional. Thank goodness for the owner of our present facility who allows our horse and two other retired standardbreds the use of a paddock and a run in shed at no cost.

So what can and should be done to correct what we hope you will agree is a horrific situation? Money talks so nobody walks. And where does it come from? From the breeders who sell yearlings for record breaking prices at both Lexington, Harrisburg and other venues. From sports books like Xpressbet and Twin Spires and the many others that grow rich on the bets made by those who gamble on racing. From casinos that do the same. From horsemen’s associations out of dues paid by their members. Out of purses offered by the racing venues. The list is a partial one. Feel free to add donors of your own. What’s the slogan, something like “If we all pay a little, we all gain a lot.”

Someone much smarter than we are summed it up well. One of the best way to judge the decency of a society is the way it treats its old. Horses don’t choose to get on the proverbial ice flow. unfeeling humans put them there.

It was nice to see some positive news about a harness racetrack for a change. With the parent company Caesars Entertainment closing Pompano Park in Florida, this news is a welcome change to hear of a major investment in one of their other harness track holdings. I hope this means that the company still feels there is profits to be made in horse racing operations. We hear so much that is wrong with our industry it sometimes feels that there is no long term future in harness racing. But this good news shows one of the largest gaming companies must feel there still is a long term future for racing at least in Ohio. I also liked the picture of the proposed new grandstand. They look like they tried to keep the spirit of the design of the old grandstand but built it to accommodate todays reduced on track attendance. I wish them good luck with this new grandstand and plan to continue wagering on their races.

I’ve been following horse racing for every bit of 50 years and I just learned something new.

Did you know thoroughbreds can tell time? They know how to be saddled, jockey up, post parade, warm up and get to the starting gate at the time the race is to go off. Amazing.

Standardbreds apparently haven’t learned this trick. The clock says 0 minutes to post and they’re not even on the track. Sometimes 12 minutes go by before the race starts.

Now people are saying post time drag allows late money to come in. Really, if you set your alarm clock 15 minutes early each morning you do know you still have 15 minutes. Maybe that works the first time.

Much more money is bet per race or race card on thoroughbred races and they get off on the pre-posted race time.

There is no reason on God’s green Earth that standardbreds can’t learn to tell time. After a very short while the betters will come to understand “we ain’t joking no more.” Post time = post time. After a time or two getting shutout betters will learn there’s a “new sheriff in town.”

If my boss calls for a meeting at 10 am you better get your butt there on time. Even earlier. Lombardi time, 15 early is “on time.”

I will now step off my soap box before I overstay my welcome.