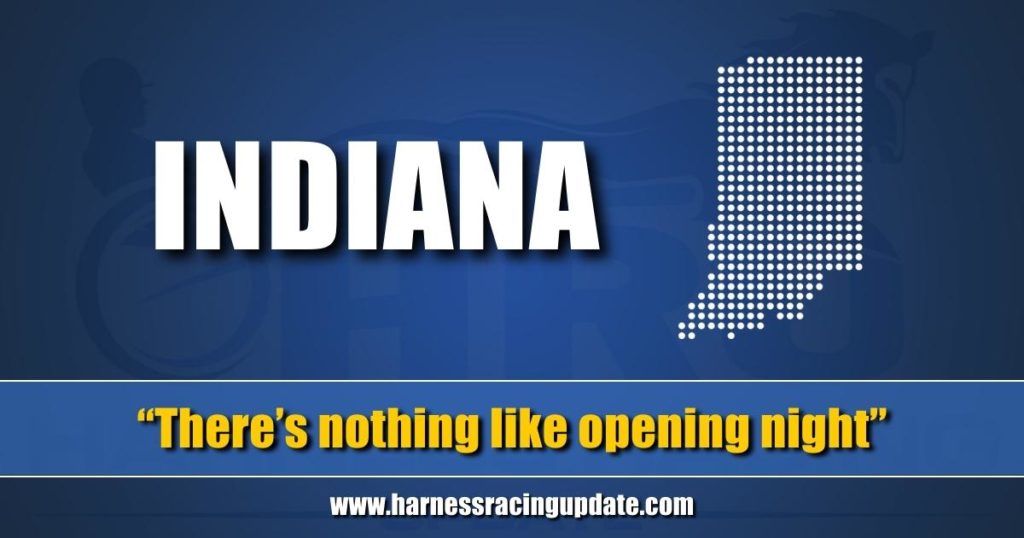 Rick Moore, vice-president and general manager of Harrah’s Hoosier Park, is pumped for tonight’s opening card of the Anderson, IN track’s 29th season.

Harrah’s Hoosier Park Racing & Casino will lift the curtain on its 29th season of harness racing tonight (March 25). The Anderson, IN oval will offer a 13-race card, with a 6:30 p.m. first post to start the race meet.

Rick Moore, Hoosier Park’s vice president and general manager, will preside over his 24th opening night at the facility, and is excited for the return of racing.

“There’s nothing like opening night,” said Moore. “I’m excited to see folks that I haven’t seen for several months. Springtime is my favorite time of year, and it’s probably because the trees start budding and the horses start racing. I can’t wait for Friday night.”

Hoosier Park kicks off its 160-day meet this weekend with cards tonight and Saturday night. Week two will feature three nights of action before moving to a four-day calendar for the months of April and May, and expanding to five days in June, July, August and September. The 2022 calendar is the longest offered at Hoosier Park, concluding Dec. 10.

“I think we have maximized our assets, our horse flesh. The good thing is, everyone is getting plenty of racing opportunities, and at the end of the day, that’s what the horsemen want. They just want the opportunity to race, and race for some good money,” Moore said.

Tonight’s card features five contests with full fields. A total of 107 trotters and pacers will line up behind the gate opening night. Moore is encouraged by the response from horsemen for the meet’s first program.

“I think we’ve got a good card for opening night. We have several really good races,” he said. “We still have horses coming from Pompano. Some horses that are probably taking a week off after Hawthorne closed, and other horses still ready to qualify, so we have a contingent still to come. I feel quite encouraged to get off to a start with 13 races.”

Racing as a form of entertainment is predicated on disposable income. With record inflation and the soaring price of gas, it is more critical than ever that Hoosier Park excels at each touch point with customers.

“We’re all feeling it, right? We all put gas in our cars, we all go to the grocery store. We all eat out. The dollar is being stretched. What does that mean? That means that when we get folks to come to Hoosier Park, we have to give them the very best customer service possible. The customer has many different options on where to spend disposable dollars, and we want to make sure it’s Hoosier Park. That means having the best food, the friendliest staff,” Moore said.

Hoosier Park will offer racing on Memorial Day, Independence Day (July 4) and Labor Day, creating events to attract the community. Moore also said that the track promotions will include nightly contests where patrons can win prizes. The objective is that, whether you are watching harness racing for the first time or a Hoosier Park regular, your experience is memorable. It is all part of an assortment of entertainment options at the facility.

“I think we’ve got a little bit of everything for folks. We’ve got the horse racing, we’ve got great dining, we’ve got a sportsbook attached to the racing complex, we’ve got a casino. We’re getting ready to undertake an expansion of the casino floor,” he said. “Exciting times at Hoosier Park. Where other businesses are contracting, we are expanding, and it’s always fun to be a part of a business that’s expanding.”

Just as Hoosier Park is committed to the customers that come through the front door, ownership is equally committed to the horsemen that enter through the stable gate. A number of capital improvements are in the works this season. Moore said that LED lighting has been installed in each barn, and the track is working on upgrading the sound system throughout the barn area. Larger television will be added to the paddock barns, and radiant heat will be installed in the paddock to provide warmth when the temperatures dip in the fall. Other initiatives include new HVAC units in the dorms and new appliances in the track kitchen.

“It’s just a lot of things, but it’s all designed to make life and work and living in our barn area the best that it can possibly be,” said Moore.

One of the biggest upgrades for 2022 is the track lighting. Last year, two light poles were outfitted with LED lights, and the feedback was very positive. Hoosier Park will upgrade the remaining 46 light poles with LED technology. The price tag for the project is $1.5 million (inflation has raised the cost from the original $1.1 million estimate). Moore said the tentative plan is to have the upgrade completed by September.

Officials have made one change behind the scenes that will more than likely go unnoticed by most. After partnering with Trakus since 2013, Hoosier Park is now employing the services of TrackMaster for GPS tracking services. Patrons watching in person or online will still have the benefit of tracking their horses via the “chicklets” on the bottom third of the screen.

“Folks won’t see a lot of differences. There may be some minor nuances going from one system to another, but our race replays will be available through Roberts Communications, and that is a first,” Moore said.

Trace Tetrick and Tyler George are set to defend their 2021 titles when the season gets underway. Tetrick will attempt to earn an unprecedented ninth consecutive driving title at Hoosier Park. A successful title defense would produce his 11th leading driver award at the track. George, on the other hand, is riding the wave of two consecutive training titles at the Anderson oval. Last season he sent out 119 winners, equaling the single-season mark first set by fellow conditioner Jeff Cullipher.