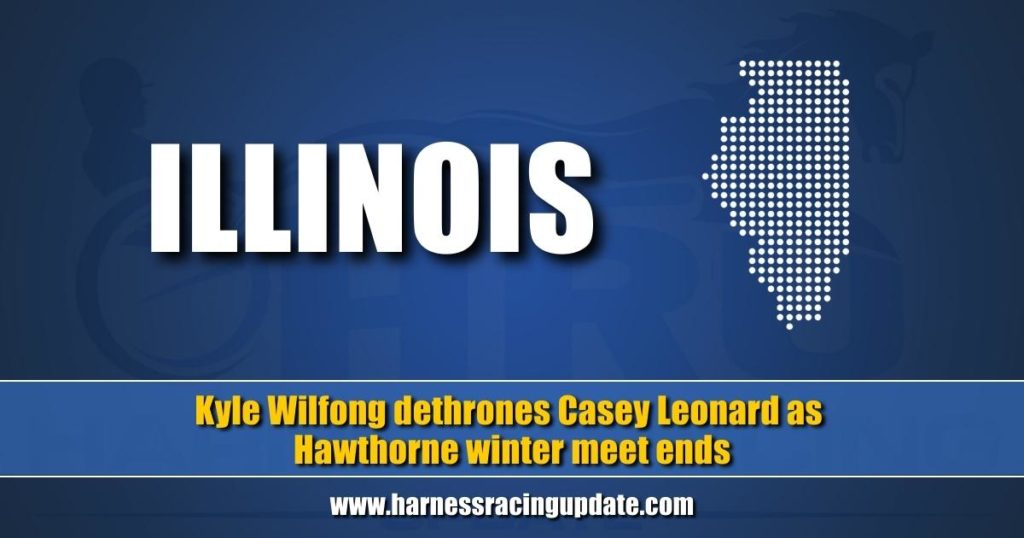 Harness racing returns to the Chicago track in July.

Kyle Wilfong went to the top of the Hawthorne Race Course driver standings when he drove the winners of six of the nine races on Feb. 18 and he stayed there for the duration of the winter meeting that ended on Sunday (March 20), ending the six-year reign of Casey Leonard.

Wilfong won 54 of the 234 races in which he drove, while Leonard was second with 49 winners in 243 outings.

“Kyle was right there (on the threshold) every year and he had a really good meet,” Leonard said. “He’s a good guy to drive with and a good friend of mine so I’m happy for him.”

Casey’s father, Terry Leonard, captured his fourth trainer title in five years, recording 29 triumphs in 163 starts. Gerald Hansen (16-for-59) and Brittney Dillon (16-for-83) finished in a second place deadlock in the wins column followed by James Eaton (14-57) and Kyle Wilfong’s fiancé, Nicole Agosti (14-for-78), who tied for fourth.

Fox Valley Gemini, the 7-year-old gelding owned by Jim Ballinger, trained by Terry Leonard and driven by Casey Leonard, last fall extended his winning streak on Hawthorne’s Night of Champions for Illinois-breds to five consecutive years, and he continued to stand out at the winter meeting by taking his last two races, giving him three triumphs, a second and three thirds in eight starts.

The meeting that began on Feb. 3 kicked off a year like none other in Illinois racing history. For the first time since thoroughbred racing returned at Hawthorne in 1922 after being outlawed in 1905 Chicago is a one-track town. Leaving Hawthorne to accommodate both the standardbreds and thoroughbreds.

The reason is because corporate overlord Churchill Downs, Inc. discontinued thoroughbred racing at Arlington International Racecourse following the 2021 meeting to eliminate competition for the nearby Rivers Casino — in which it holds a 62 per cent interest — and sold the property to the Chicago Bears for redevelopment.

Thoroughbred racing at Hawthorne will commence on April 2 with a meeting that will run through June 25.

The sulkies will return for a July 1-Sept. 11 meeting climaxed by the Night of Champions after which the thoroughbreds will reclaim the track for a Sept. 23-Dec. 11 meeting.

“The timing is right for some (horsemen) to go to Hoosier (which is scheduled to begin its meeting tonight (March 25)); others will lay off and start back at Springfield (in non-betting races) in June and go from there,” said Tony Somone, executive director of the Illinois Harness Horsemen’s Association (IHHA), addressing the hiatus of more than three months in the Hawthorne harness schedule.

“For the most part we don’t like it but we’ll do the best we can.”

Kyle Wilfong’s father, Brett Wilfong, has moved his racing headquarters from Illinois to a farm in Indiana near Harrah’s Hoosier Park Racing and Casino and Kyle and Nicole have bought a home in Anderson, IN.

“We’ll be racing mainly in Indiana and maybe come up to Hawthorne a couple of days a week during the summer,” Kyle said. “Since that meet is so short we’ve had to look for another venue.”

The Hawthorne winter meeting driver championship was the second title in two years for Kyle, who was No. 1 at the Oak Grove Racing and Gaming meeting in Kentucky in 2020.

“Even though this one was just a winter meet it was cool to get,” Kyle said. “This was a really good meet for both Nicole and me; we’re very happy about it.”

Kyle was especially pleased with the performances of He’zzz A Wise Guy, the accomplished 5-year-old pacer bred and trained by John Filomeno: “He was undefeated at Hawthorne and got written out of Illinois-bred races. He went to Ohio and won in open company (at Miami Valley Gaming) in 1:49 and was second in another race that went in 1:49.  He’s just a really good horse and I love driving him.

Agosti teamed up with her fiancé to win the Winter Wonderland series final for open pacers with the 4-year-old gelding Time For Fun.

“That was the highlight for me personally,” she said, “winning the $22,000 final (in 1:54.3) from the nine-hole with my homebred after he had a fourth and a second earlier in the series.

“The meeting definitely exceeded my expectations — me winning that race and Kyle winning the driver title.”

Agosti’s career has been a study in upward mobility since she earned her trainer’s license in the summer of 2018, the same year she was the recipient of Harness Racing Replay’s Caretaker of the Year Award.

While Kyle Wilfong is staying active in Indiana, Casey Leonard is taking some vacation time.

“I’m going on a family vacation to Park City (Utah) to ski for a few days and from there we’re going to Scottsdale (Ariz.) to golf for a few days,” he said. “My son is on the high school lacrosse team here and when we come back I don’t way to miss any of his games. After that I’ll go on a little fishing trip and then be back racing at Hawthorne.

“My dad had a lot of horses at the winter meeting and they came on late. Fox Valley Gemini is not really a wintertime horse, the track was real bad, he got an infection that we had to deal with and the years are starting to catch up with him but he raced well in his last couple starts. We’ll race him at Hoosier a couple of times to keep him sharp and get ready for the summer.”

Horses trained by Terry Leonard made 163 starts at the meeting, by far the most for any trainer.

Now, according to Casey, the stable is doing some liquidating and sending horses to other trainers.

“Fortunately, my (trainer) brother Ross is doing very well in Indiana so unfortunately he can’t take a lot of our horses because his barn is about full,” said Casey, who is overseeing the horses while his father vacations in Hawaii.

“I’ve sent three of our 3-year-old homebreds to Trent Stohler, who does a really good job. I’ve got a 2-year-old with Robert Taylor and another with Mike Hollenback and two 2-year-olds with Rick Schrock at Springfield.

“It’s very tough to be a trainer in Illinois because if you want to keep all of your horses racing you’re going to have to drive a lot and with fuel prices the way they are you’ve got to weigh your options. You can’t drive subpar horses up and down the road trying to get checks.”

Somone is in complete agreement. “No doubt about it,” said the IHHA executive director. “If you ship it’ll cost you $200 in gas, plus wear-and-tear on your truck, labor and Lasix. Then, what if you draw the 8 or 9-hole.