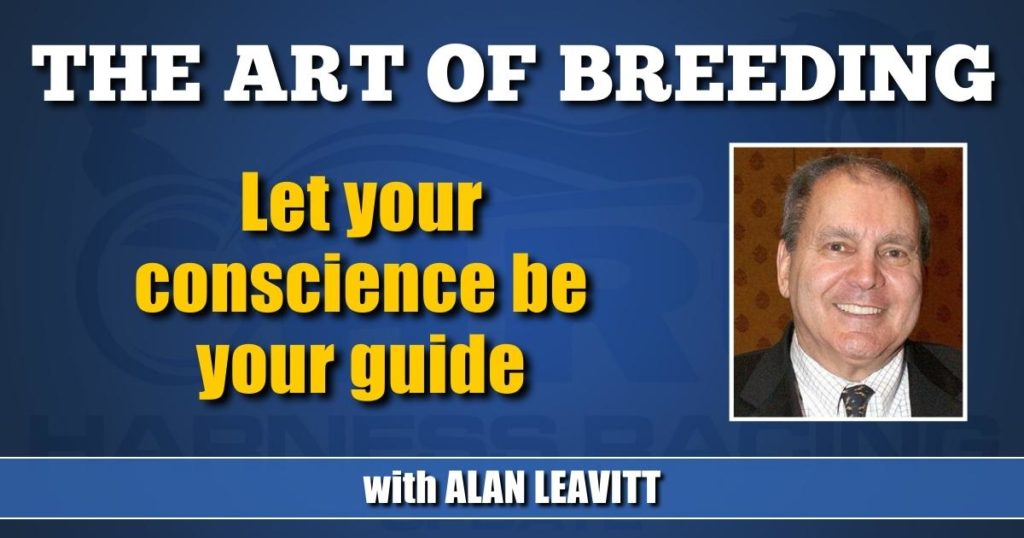 Let your conscience be your guide

As someone who has advocated inbreeding as a way to produce superior racehorses, it gave me pause to read that the American buffalo is now suffering losses because of a genetic deficiency caused by inbreeding.

Although there were once millions of buffalos roaming the plains of this country, indiscriminate hunting, both for meat and hides, virtually erased them from North America. From the few survivors, the breed was slowly regenerated, and they now number in the tens of thousands, all raised domestically, on ranches.

As with any breed being created, or, in this case, recreated, intense inbreeding has to be part of the process. When it comes to our breed, the standardbred, the early pacers would have frequently been the winners of the annual I’m My Own Grandpa Awards, assuming I was around to give them.

When smart ranchers were recreating the American buffalo, they could only do it by inbreeding. Which has worked fine, insofar as producing a beef animal with real commercial value. But now there is a problem. Buffalo are succumbing to a fatal disease because their immune systems aren’t strong enough to fight it off.

I’m certainly not saying that our trotters and pacers are about to start dying off to a mysterious disease, but it does mean that unchecked inbreeding could someday cause a similar condition in our beautiful animals. This is in a context of decades, and assumes that the USTA of the future doesn’t take the necessary steps to keep our breed safe.

Some untoward comments from various carpers notwithstanding, I believe that the USTA of the future will act to protect our breed. This already happened in 2009, when the breed organization imposed book limits on stallions of both gaits.

The basis then was a peer-reviewed thesis that showed that the American trotter had lost 17 per cent of its heterozygosity, which is the variability factor. The first manifestation of this loss is a loss of fertility in the males of the effected breed, in our case our trotting stallions.

Anyone in the breeding trenches in the early days of this century can testify, or swear, usually quite loudly, about the problem of getting mares in foal to Valley Victory and his sons. Because there are practical and commercial considerations that had to be part of the final equation, the USTA set every stud’s annual book limit at 140 mares.

If there weren’t these other, material, considerations, I would have liked to see a limit of 100 mares, or better still, 75. The lower the book limit, the more breeders would be forced to turn to less popular stallions with less fashionable pedigrees. And that would, in turn, bring new blood into the breed, which would eliminate the loss of heterozygosity, the variability factor, and with it, the loss of stallion infertility.

As I’ve already said, I’ve been a big proponent of inbreeding, to get a superior racehorse. But I also have to admit that in the long run, it would be very bad for our breed. So I leave it to you to decide whether to take the high road or the low road. In Jiminy Cricket’s immortal words: let your conscience be your guide.

Regarding the USTA continuing to make freeze branding available on an optional basis, it represents a triumph for my dear friend Ellen Harvey. She was by no means alone in advocating for freeze brands, but she was the most articulate and persistent advocate.

For anyone who has ever tried to identify the standardbreds in a kill pen, which is exactly what the words mean, sans a visible freeze brand, it’s virtually impossible to identify our horses by their micro-chips.

No one resisted freeze branding more than this kid, to the
point that at the end, Castleton and Walnut Hall were the
only two farms which insisted on lip tattoos rather than freeze brands.

But this new consideration takes precedence over any aesthetic considerations. All our foals will be freeze branded this year, as will all the foals of our clients. I live for the day when the law makers in Washington outlaw the transportation of horses for slaughter.

Last week also was the deadline for submitting your yearling entries to the annual October sale at Fasig-Tipton. Fasig-Tipton has a special meaning for me, because my McDonogh Military School classmate, John Finney, was, for years, the president of Fasig.

Finney and I stayed in touch long after our marching days were over. He called me one day when we were both living in New York.

“There is a $40 million thoroughbred market in Lexington,” he said, “And I’m going down there to get my share of it.”

The beautiful arena and the attractive but practical barns were all designed down to the last nail by my friend.

One night long ago, I was with some friends in a Lexington night spot that had a dance combo. To my surprise, I saw Finney on the dance floor with a woman I didn’t recognize. When he saw me, he let me know he’d be over shortly.

The music ended, his partner was redeposited at the table, and he arrived where I was sitting, visibly perspiring.

“That’s Harry Somebody’s wife,” he said, “And she loves to dance and Harry doesn’t.”

Then, as he wiped his brow with a damp handkerchief, he added, “And it’s hard work exercising another man’s horse.”