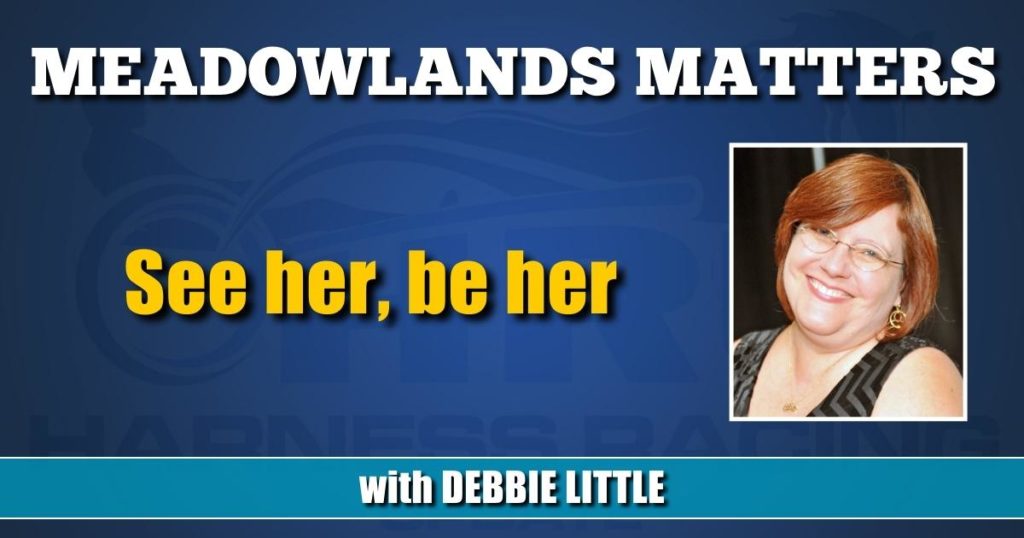 See her, be her

In a time when TV spots are proclaiming “If You Can See Her, You Can Be Her,” drivers Nicole DiCostanzo and Marianna Monaco are doing their part.

DiCostanzo, 23, and Monaco, 26, have been seen on the track practically every Friday as members of the GSY Amateur Racing Club and, as a result, are two of only three women currently appearing in the Meadowlands driver standings. The third is Melissa Arbia, also a GSY member.

“I feel like you’re seeing more and more female drivers,” said Monaco. “And I would like to say for myself, and probably Melissa and Nikki, harness racing really wasn’t our thing.

“Melissa met Joe [Bongiorno] and Nikki found Steady Pulse, that’s her heart horse, per se. And I feel like at one point we all took a chance on something that we had no idea was going to pretty much take over our heart and be something that we love so much.”

DiCostanzo was introduced to harness racing as a teenager in 2015 through a boyfriend who owned horses.

She met trainer Mike Russo and started helping out at his farm, which was just a mile from her house and two and a half weeks later, she bought her first horse, the aforementioned Steady Pulse.

“I really enjoy driving every weekend,” said DiCostanzo. “I hope to get a few more drives, of course, but I’ve been enjoying driving my own horses, for sure.”

DiCostanzo credits owner/trainer Victoria D’Alessandro with helping her when she started racing at The Big M.

“As soon as Victoria saw me walking in the paddock, she said, ‘You’re driving?’ And I said, ‘Yeah,’” said DiCostanzo. “She goes, ‘I’m listing you next week.’”

D’Alessandro did just that by listing DiCostanzo on Rockabilly Charm.

Three proved to be a charm for the trio of D’Alessandro, DiCostanzo and Rockabilly Charm since the third race of their collaboration was a winning one.

In both her first career and Meadowlands win, DiCostanzo exploded into contention with Rockabilly Charm on the far turn, giving her the nickname “Dynamite.”

“I don’t even really know how to explain it, because I can sit back and watch my replays and get the same feeling,” said DiCostanzo of her first win. “It’s something that you work your whole life for without realizing it. And once you get into that moment, there’s really no better feeling in the world than knowing what you just did.”

Last week, when going to the gate Steady Pulse went off stride due to broken equipment. And even though it was a scary experience DiCostanzo kept her cool.

“Somebody actually wrote to me on Twitter ‘This is why women belong in the kitchen,’” said DiCostanzo. “It matters to me that my horse comes off the racetrack and he’s sound and he’s healthy and he’s happy. So, to me I kept myself safe and I kept my horse safe and to make it back to the paddock after that happening it meant everything.”

Unlike DiCostanzo, Monaco’s childhood included many a trip to Yonkers Raceway, where, at that time, driver Stephane Bouchard was the king of the Hilltop oval.

“Over the years, I probably had enough whips just from Stephane to probably supply the entire country with a whip,” she said.

As a talented young athlete, Monaco envisioned herself hoisting trophies, but on the 18th green, not in a winner’s circle, as a Division I golf star.

“Once I went to school, I told my dad if I’m going to play golf, I want to drive in at least one race,” said Monaco. “And that first race was up at Goshen and I won that race, which I’m not sure if that was the best thing to happen, because once you get that win, it’s like, okay, you can’t stop now.”

Monaco’s first win at The Meadowlands came on Sept. 11, 2020, when she looped the field and went last to first to score an upset victory with Lear Seelster for trainer Chubby Stallworth.

“Once we were five-wide, in that last turn and we were turning for home it was all kind of like a blur,” said Monaco. “It wasn’t really until the next day that I was kind of able to comprehend what actually happened. I must have watched the replay 100 times and I was like how did we win from that spot?”

Just like DiCostanzo, Monaco has also had women support her career along the way.

“The one that stuck out the most to me was Stacy Chiodo, and actually one of the first horses I warmed up at Yonkers was for Stacy and it was Mighty Young Joe,” said Monaco. “Every week, I would watch her and I was always in contact with her. I’d go to Yonkers and I’d warm up for her and being a woman, she gave me that opportunity.

“And I feel like she opened my eyes and said, ‘Hey, you can do this. I got here and you can, too.’ That was a big influence on me coming from another female in this sport.”

Chiodo is also a big supporter of the GSY, which her husband Bruno competes in, and as a professional driver herself, Chiodo holds the world record for the fastest mile, 1:49.3, by a female driver set at The Meadowlands in 2014 with Mighty Young Joe.

DiCostanzo and Monaco are triple threats when it comes to racing, since they are owners, trainers and drivers.

DiCostanzo owns four of the six horses in her barn and she is a one-woman band.

Monaco has a total of six horses that she currently trains but is always open to taking on more. She usually does everything for her horses as well, but she would be remiss if she didn’t acknowledge McKenzie Sowers.

“[McKenzie] is currently in nursing school, but during her breaks, she is a tremendous help in the barn and supportive of my driving/training career,” said Monaco. “I currently train two horses for her and we own a third one together.”

If Monaco’s colors look familiar, it’s because they were inspired by Bouchard. Being Italian, she felt red, white and green colors made sense, as did recognizing a driver who was so kind to her when she was just a kid. Bouchard took the time to talk to her and give her a whip, gloves, a helmet and even a set of his colors and that has always stayed with her, especially when other drivers were not so generous.

When competing at Maryland’s Great Pocomoke Fair, Monaco had the opportunity to pay it forward when she took the time to give her whip to a young boy watching the races.

“And I hope he comes back whether it’s for me, Dexter [Dunn], Andy [McCarthy] or someone else,” said Monaco. “I feel like those are the moments, especially for the young ones, that they remember. You remember the good ones and the bad ones. Being a driver, I think about it. And growing up I remember the guys that always told me “no” and now that I’m in the business I’m like, you know what? You don’t want to be like that person.”

All four “Women In Racing” interviews can be found on the Meadowlands’ YouTube channel here: www.youtube.com/user/MeadowlandsRacetrack

“So, for the women that are out there and aren’t sure if driving would be for them or even harness racing, sometimes you’ve just got to put that aside and take that chance,” said Monaco. “Take that step, because at the end of the day if you don’t try, you’re never going to know if it’s for you. I never would have thought I would have as many starts driving as I do.”