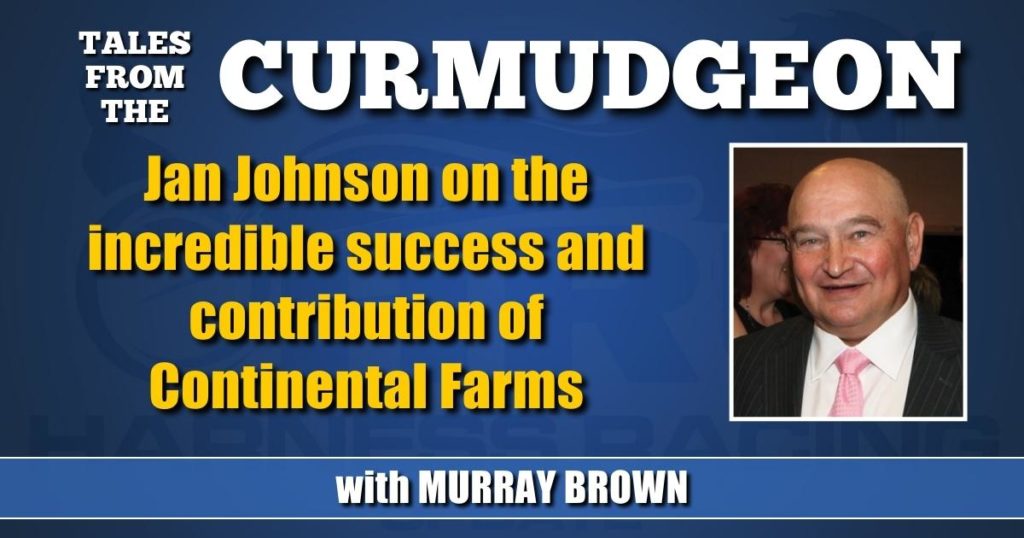 Jan Johnson on the incredible success and contribution of Continental Farms

There is little doubt that the genesis of the European, primarily Swedish, influence over North American trotting began with the entity known as Continental Farms.

The argument could be made that without Continental and their success on these shores, we may have not had the Nordins, Jimmy Takter, Per Henriksen, Per Eriksson, Ake Svanstedt, Jonas Czernyson, Domenico Cecere and numerous other prominent European horsemen racing here.

Continental Farms officially began as a registered stable in the United States in 1975.

The two elder members of the stable — Berndt Lindstedt and Hakan Wallner — first joined forces in Sweden as partners in 1966 when Lindstedt was 30 and Wallner was 27.

They raced primarily in Sweden with occasional forays into other European venues.

They were joined in the enterprise by Jan Johnson when Continental Farms was formed in 1978. Johnson had been with Wallner since he was 14 in 1965 and looked upon him as being somewhat as a surrogate parent.

Wallner was a born entrepreneur. He began visiting America in the mid-‘60s purchasing horses for the Wallner-Lindstedt stable. Among his early purchases on these shores was the 1972 Elitlopp, 1973 Prix d’Amerique winner Dart Hanover and the 1979 Elitlopp winner and very successful Swedish sire Pershing. Bernie Lindstedt drove these two as well as most of the stable’s successful horses on both sides of the Atlantic.

The soft spoken Lindstedt is a great all around horseman, but is likely best known as one of the top drivers harness racing has ever known.

He has driven the winners of over 2,000 races and $25 million and was the leading driver in Europe on several occasions while also competing at a top level in North America. He has competed in and been victorious in most of the most important trotting classics on each side of the Atlantic.

The elder statesman of the trio at 86, Lindstedt is now retired and living in Sweden where he still follows racing fervently and speaks on a daily basis to his best friend Jan Johnson.

Lindstedt was enshrined into the sport’s Living Hall of Fame in Goshen in 2003.

Wallner was known as one of the world’s greatest trotting ambassadors. He was a man of great warmth and personality as well as great entrepreneurial skills. If one were to choose the person who was most responsible for international trotting commerce, the choice would likely be between Hakan Wallner and France’s Jean Pierre Dubois.

He more than any other single individual paved the way for European horsemen to move to and compete in North America at the trotting sport’s highest level.

In the 1980s, Wallner moved to Italy where he pursued a successful career including a win in the Italian Derby with Offenburg LB in 1992. He passed away in Treviso, Italy in January of 2001.

He was elected to the Swedish Hall of Fame in 2015 and as an Immortal in the Hall of Fame of the Trotter in 2018.

Jan Johnson the youngest of the trio, now 71, is the only member of the stable still active in the sport on a daily basis. Many people regard Jan as having been the backbone of the operation. Bernie was best known as the driver. Hakan was Mr. Outside who everybody knew and often dealt with. Jan was in effect responsible for a great part of everything else.

Although the two junior members of the Continental team do not have Lindstedt’s driving numbers, the ones they do have are nonetheless not too shabby. Wallner drove the North American winners of $8,302,240, while Johnson has driven the winners of $14,070,578.

It was from his home in Lighthouse Point, FL that we spoke with Jan Johnson recently.

Jan, you are 71 and still active on a daily basis. You are not only occupied at one job in the industry, but in two.

“I’m not that old — yet! I still enjoy what I’m doing. I’ve been lucky enough to land a job riding behind the 2-year-olds in Tony Alagna’s stable, six mornings a week. What a pleasure it has been working with Tony, his mom Donna Lee and the wonderful team that they have put together. They have as well-bred and as good a looking bunch of young horses I’ve ever seen put together in a single stable. One after another, one set after another! There appears to be a whole lot of quality among them. I’m fairly certain that there are several of these colts and fillies that will be heard from on the Grand Circuit this year.

My second job is in helping to manage Lennart Agren’s SRF stable horses here in the United States. Mr. Agren is the largest trotting horse owner in Sweden and maybe in all of Europe. He owns over 200 horses. Of those, about 50 of them are here in the United States. About half of them are broodmares, with the others being horses in training. I manage the business aspects of his horses here in the States. I keep in touch with the farms where the broodmares are stationed and stay in touch with the trainers in whose charge the racehorses are. It’s a little busy now, with the breeding season approaching full tilt and stakes payments coming this week.”

Together with Hakan Wallner and Berndt Lindstedt, the three of you comprised Continental Farms. Tell us about your partners.

“I worked for and with Hakan from the time I was 14 years old. There was never another person like him. He was the Swedish equivalent of Billy Haughton and Stanley Dancer combined! He was a great horseman, a great friend and a great businessman. He paved the way for many young European horsemen here in the United States. He was a dynamic personality who had a great influence on international harness racing. I looked upon him as being almost a surrogate father.

“Bernie is my oldest and dearest friend. Even though he hasn’t left Sweden for five years, we still speak with each other every single day. I have heard him described as being someone who personifies the term ‘gentleman.’ I could not agree more.”

You’ve been fortunate to have worked with all of the great Continental horses, through the years. Which one was your favorite?

“That’s too hard a question. There have been so many. I couldn’t come up with just a single one.”

Okay, then, which one was the best?

“This might surprise you. It was the filly Nan’s Catch. In my heart I know that if she had been in the Hambletonian, she would have won it. As it happens, we won the Hambletonian that year with Armbro Goal, with Nan’s Catch winning the Oaks. We also had another good trotter that year in Supergill. I believe that she was better than either of them. We’ve had more than our share of top horses through the years, but I truly believe she was the best.”

Then I’m guessing that it wasn’t a surprise that if any mare would produce a trotter as good as Moni Maker it would be her?

“It is hard to imagine any horse producing a Moni Maker, but if any mare had the credentials to produce one as good as Moni Maker, it would be her. (More about Moni Maker later).”

Tell us a little about your early years here.

“My first year here was 1973. I was here with Hakan and another fellow. We had six horses between the three of us. How times have changed. Nowadays it isn’t unusual for one groom to have six horses by himself. Fortunately of the six, we had two real good ones in Express Ride and Buckeye Count. So we got started off on the right foot.”

Who is the best horseman you’ve ever known?

“That would have to be Stig H Johansson. He did it all. He was a great driver, still is a great trainer and is the greatest all around horseman I’ve ever known. In terms of just being a great trainer, Soren Nordin would certainly have to be in the conversation.”

What was your greatest thrill in all your years in the sport?

“My greatest personal thrill would be in winning the 1990 Kentucky Futurity with Star Mystic.”

You developed a very good pacer in I Am A fool. How did that come about?

“The plan was that Bob Waxman and I were going to take a flyer and buy a pacing colt together. As sometimes was the case with Waxman, he didn’t pay for his share. So I ended up owning him all by myself. He trained well all winter and I qualified him at The Meadowlands in 1.56. He looked good. Brett Pelling made an offer of $200,000 for him on behalf of David Brooks. That was an awful lot of money for me, so I sold him. The colt ended up making a million dollars, so it turned out well for everybody.”

Tell me something about yourself that not too many people know.

“On separate occasions, I had both Valley Victory and Moni Maker bought. Unfortunately, both deals went south. I had a deal with Arlene Traub to buy Valley Victory for a client. He was going to be sent to Sweden where he would stand in stud. Arlene then broke the agreement and sold him to George Segal and Tony Pedone. I had Moni Maker bought for a client of ours at the conclusion of her 2-year-old season for $400,000. The check was actually written. Then at the last minute, our client got cold feet and he changed his mind. The breed would be a whole lot different if those deals, especially the one for Valley Victory had gone through.”

“I’d be remiss if I didn’t give credit to the great team of caretakers we’ve had through the years. Some of them sprouted their own wings and flew well beyond from where they came. If you don’t have good people taking care of the horses, then chances are you won’t have much success.

“We’ve also had a great number of quality owners backing us through the years, including, but not limited to Ulf Moberg, K G Bertmarks, Jorgen Jahre Sr and Jr, Ebby and Peter Gerry and Castleton Farms.”

Do you envision the possibility of ever going back to Sweden to live?

“Not a chance. I am an American. This is still the greatest country on earth. I still hold a great love for Sweden and will occasionally go back to visit, especially around Elitloppet time. The United States is my home.”