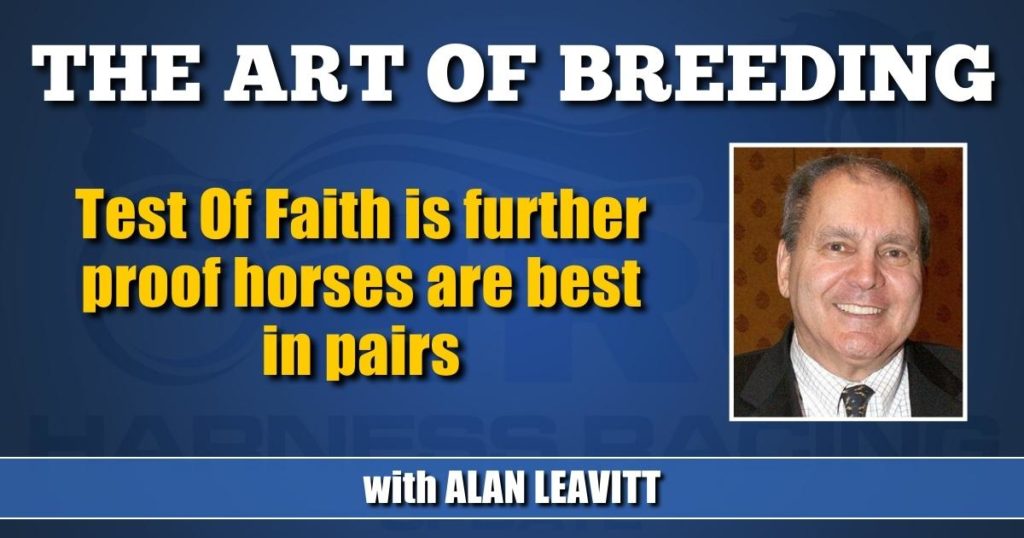 Two by two by two

Horse of the Year winner Test Of Faith is further proof horses are best in pairs.

Brett Pelling expressed some surprise that his great filly Test Of Faith was submissive rather than dominant with her constant turnout companion.

He shouldn’t have been. Over the years I’ve come to the realization that there’s no correlation between a horse’s character on the track and his or her character in the field. This was reinforced in the two breeding seasons when we had Moni Maker here at Walnut Hall. Moni always had her own constant companion, and wherever one of them went, the other went, too.

Moni was a big, stout mare, and on the track I’ve never seen her equal. Her pal was a little thing, probably at least a hand shorter than Moni. She almost looked like her great friend’s mascot. But anytime the little girl just laid an ear back, Moni Maker was gone to the other side of the paddock.

As a breed, horses are “buddy animals.” They naturally align themselves in pairs, in their present, modern incarnation. Volumes have been written about how things worked in the natural state, with one dominant stallion for a band of mares, and the hierarchy of mares within the band.

I’m not going to rehearse any of that, because for our purposes, as breeders in 2022, the fact that mares will naturally “buddy up” is the important point. In actual practice it means that horses should always be turned out in even numbers, so no ‘lonely onlies’ are created.

Simple, no, but I bet I wouldn’t have to go very far to find an uneven number of horses together in the same field. In fact I know I won’t, because there are three thoroughbred mares in a field just down the road.

On the subject of equine domination and submission, a fairly hard search found no term that defined this subject. So I’ve invented my own term for it: pasture personality. It simply means that horses are naturally buddy animals, and one of the two will always be the dominant actor, and one the submissive one.

In a sense this follows with us, human animals. We go in pairs, i.e. one man, one woman, although this has as much or more to do with procreation than anything else. But in human terms, there always is one dominant figure in every group. How that happens is to be found in the history of our evolution, but has nothing to do with you, me, Brett Pelling, or Test Of Faith, whose pedigree is quite interesting.

Test Of Faith is by Art Major, a Hall of Fame stallion, and out of Cannae Cammie, by Cam’s Card Shark. Cannae Cammie is a wonderful example of a mare with a speed gene genetic deck that probably starts with a 10 and goes up from there.

They comprise three of her five foals of racing age, including a 2-year-old of 2021. This is the kind of mare who will always provide a high speed gene card for her 50 per cent contribution to any mating, and it has nothing to do with her own track earnings of $538,160. Which I know you and the rest of our little world will scoff at, but it happens to be true.

Strangely enough, the buying public has not really caught on to what a loaded shotgun C.C. is. Only one of her foals topped $100,000, and that was only by $10,000. Even Test Of Faith brought only $92,000. Which just doesn’t compute, because with Cannae Cammie’s half-a-million in track earnings her progeny should have been in high demand, even though for the wrong reason.

In case you forgot, it’s the wrong reason because every horse’s phenotype, or living horse which includes racetrack performance, has no correlation with its genotype, or genetic profile, with special emphasis on the speed gene.

Back to C²’s extended pedigree, it brings back some personal memories. C²’s fourth dam is Gidget Lobell, and her fifth dam is GoGo Playmate, both mares bred and owned by Yours Truly. Gidget produced the great horse, No Nukes, who was probably the fastest pacer we’d ever seen in his prime but fate never gave him a chance to prove it.

Looking further at C²’s pedigree, you see Romola Hanover as the fourth dam of Art Major. This is the great Romola family that’s still going great today. But C² also has two crosses to Abercrombie being 2 by 4 to him, and his second dam is a Tar Heel daughter named Hobby Horse Tar. She was bred by a dear friend of mine, Bob O’Donnell, gone much too soon. And Hobby Horse Tar also traces directly to Romola’s sister, Nora Adele.

Both mares were out of May Dodge, who from three daughters shaped the breed of the modern American pacer.

There’s also Bret’s Romance in the last generation, and she has personal significance. She was bred by Earl Teater, the great saddle horse trainer who was the hero of my youth. His best horse was Wing Commander, still the standard that five gaited horses are measured by.

In the fourth generation line there’s a mare called Meadow Trick. I owned her twice as a race mare, thanks to claiming races. Then, after she was retired, I sold her to John Stewart, Bob and Tom’s brother. He bred the dam of Cam’s Card Shark with her.

For those who weren’t around then, Cam’s Card Shark gave the lie to the belief that, to be successful, as a stallion had be sharp headed. (Full disclosure; I’ve always had that belief.)

It suddenly occurs to me that Cam’s Card Shark may have passed on his plain head to Cannae Cammie, and that may have something to do with the relatively reasonable prices her progeny have brought. And that word, reasonable, evokes the memory of the immortal girl in the bar, the one who, when asked if she was free, replied, “No, but I am reasonable.”