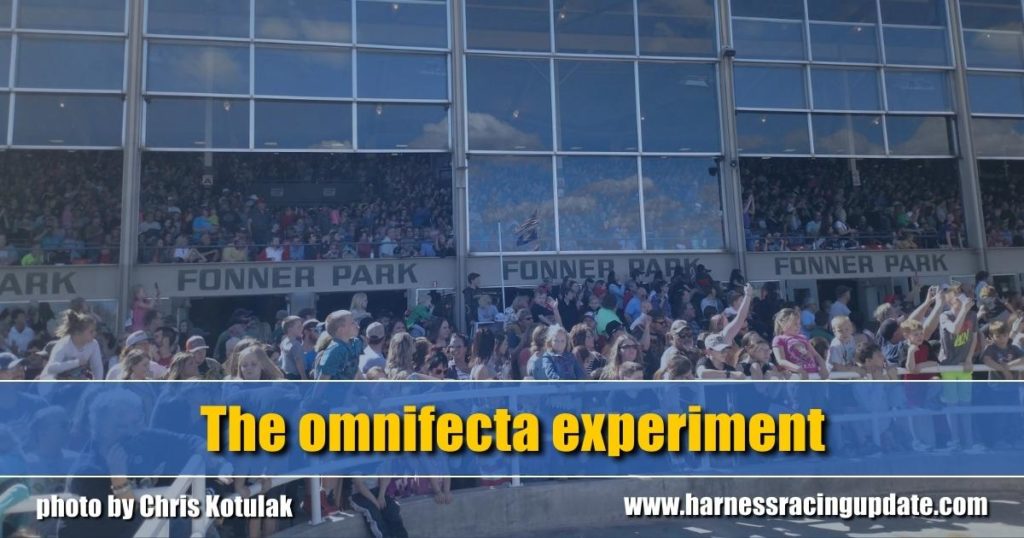 Fonner Park introduced a new wager on Feb. 19, opening day of the 2022 season. The Nebraska thoroughbred track rolled out the omnifecta, becoming the first venue on this side of the Atlantic to offer it. “Pick two of the top three and win,” declared promotions. “Three possible winning combinations. Consult a mutuel teller for info.”

The omnifecta/omni bet is a more forgiving version of the quinella. In some markets, it’s known as the “swinger” / “tote swinger.” At Fonner, it’s officially the “show quinella.” On self-serve machines, “the button actually says ‘2 in $,’” said Mark Landis, financial analyst/operations assistant at Fonner. “2 in $” is shorthand for “two in the money,” a summary of how the bet works: Hit the board with two horses, any order.

Each winning omni combination has its own payout. The wager is already available to North American ADW bettors playing certain international races (UK, South Africa, Dubai) with at least six starters. If the field is scratched down to 4-5 horses, the omni reverts to a traditional quinella, paying out on the race’s top two finishers only.

“Actually, there are four different methods in Nebraska for offering this [wager]. You can make it one pay per race – that’s one variation,” Landis told HRU. “We rejected that. We wanted the three different payouts, because if you get a longshot, you should be rewarded for that. And the [state racing] commission explicitly praised us for that.”

“We didn’t have visions of dollar signs floating in our eyes when we set out to do this,” said Landis. “We were looking for a bet that caters to our casual fans and our beginner fans… Fonner Park is one of the very few tracks in the country that sells out every Saturday. It feels like you’re stepping back to the glory days of the ‘80s and ‘90s. It’s really fun, but these are not sophisticated bettors. They’re not the grinders who are looking for that value and the perfect ticket structure and all that.”

It took nearly two years to convince CEO Chris Kotulak that they should try the omni.

“I saw the bet at other tracks, I think Saudi Arabia and Dubai. I thought, ‘Man, this is a great bet. We should have this thing,’ it’s a great beginners’ bet,’’ said Landis. The timing wasn’t right until this season, but the bet’s arrival seemed almost predestined: When he applied to the Nebraska Racing and Gaming Commission, “the omni had actually been approved for Nebraska racing way back in 1985.”

“So he did a corporate sponsorship and paid for all the tote fees and that stuff, to get the thing set up for us. And sure enough, here we are, up and going with it.”

The $2-minimum omni debuted with Fonner’s lowest (15 per cent) takeout rate. “We really think it’s a good bet for the casual fan,” said the financial analyst. “There’s a lot of leeway with this thing. How many times are we walking through our [grand]stands and somebody’s [saying] ‘Oh, I got two out of three in the exacta?’”

“We’re trying to get traction for it,” said Landis. “It’s doing better than I had hoped it would… I also had dreams and hopes and visions, and it’s not getting there yet.”

Aqueduct media releases from 2013 suggested the Queens, NY track would be North America’s first to offer the omni, in 2014. (It did not.) Now, there are rumours of another track looking to follow Fonner’s lead.

“There is very little cost,” explained the Nebraska track’s spokesman. “I’m not worried about cannibalization from the other pools. It’s a great way to get more people involved in the pari-mutuel side of racing.” And there’s no reason for harness tracks to avoid the omni, which has the advantage (over multi-leg bets) of creating churn: “It’s not specific to breed at all.”