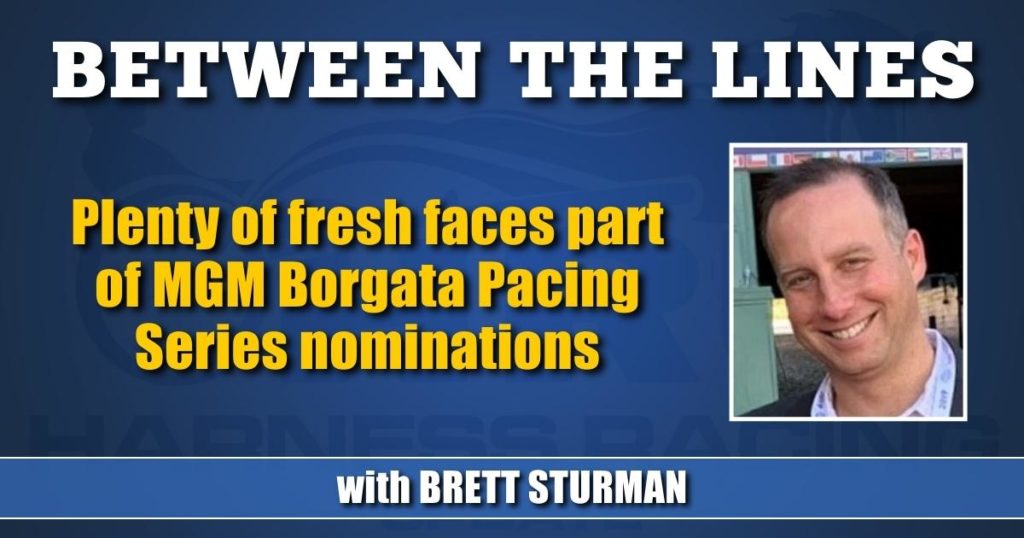 The 2022 free-for-all stakes season officially kicks off in just over two weeks with the first of five preliminary legs for the MGM Borgata Pacing Series on Monday, March 21. Included in the hyper-competitive list of nominations that were announced this week is defending 2021 champion This Is The Plan. Though, returning faces make up a small number of the total list of nominations. Nearly three-quarters of those eligible to the series being Borgata series first-timers.

There were 40 nominations to this year’s Borgata, down from 47 last year. And of those 40, only 11 are ones that raced in at least one leg of the series last year. Beginning first with those who competed last year, This Is The Plan leads that group. Motivated by a terrific win from post 8 in last year’s Borgata series final, he went on to win over $800,000 for the season which included an all-time record of 1:47.3 of any half-mile surface. He qualified Saturday (March 5) at the Meadowlands as he works towards his pari-mutuel debut this season.

Other returning contenders include Leonidas A, who won all four preliminary legs that he raced in last year and looked like he would be a finals threat before running up against it with an outside post draw. None Bettor A and American History didn’t fire in a few of the legs they tried last year, but the latter remains fast as usual. American History co-owns the track record at Yonkers and is coming off a 1:49.4 win in the preferred at the Meadowlands last week in a race where he narrowly bested fellow Borgata-eligible Covered Bridge, as well as Sonny Weaver N.

Of the 29 nominations who are new to the Borgata, Tattoo Artist leads the way. In fact, new nomination or not, he ought to be considered the pre-series favorite of everyone. He makes his 2022 debut this Monday in the Yonkers Open, and it comes on the heels off a strong return qualifying win in 1:50.2 over another Borgata newcomer, Nandolo N. He crushed open foes at Yonkers twice in November, and in an October win, Tattoo Artist tied an all-age track record of 1:49.3. His mark of 1:47.1 last year came on Hambletonian Day at the Meadowlands. Dexter Dunn has been the regular driver for Tattoo Artist, and he’ll look to avenge last year’s Borgata, when he went into that series with the presumed overwhelming favorite Let It Ride N, who disappointed.

Next up as another live contender is the 4-year-old Whichwaytothebeach. The Hempt winner, who also finished third in both the Pepsi North America Cup and Little Brown Jug, was a recent $390,000 sales-topping purchase in January from the Tattersalls 2022 Winter Mixed Sale. Sold to Canadian interests, he qualified two weeks ago at Woodbine Mohawk Park to win by almost a double-digit margin. Also selling from that same sale and nominated to the Borgata is 2020 Little Brown Jug winner Captain Barbossa. He went for $210,000 from the Winter Mixed Sale and has been racing in the Meadowlands preferreds so far this year.

Among the stronger nominees trained by Jennifer Bongiorno, last year’s leading conditioner at Yonkers, are Nicholas Beach and Dragon Said. It’ll be worth watching to see how Dragon Said stacks up against Borgata competition. He had a monster year last year under Bongiorno, winning 10 of 22 races en route to a rapid ascension up the class ladder. He took a mark of 1:49.4 last year at Yonkers and just won the open last week over Leonidas A. Barn mate Nicholas Beach was one of the top FFA horses last year and qualified Saturday at the Meadowlands as he gears up for his 6-year-old season. His 1:47.2 mark from last year was taken at the Meadowlands in a Preferred where he bested upcoming competitors This Is The Plan and American History.

One of the unknowns is that of American Dealer N. He raced Saturday at the Meadowlands (after the deadline for this column) so we’ll get a better read then. By American Ideal out of a Bettors Delight mare, he sports a strong record from Australia and looks to have qualified well enough right in behind Tattoo Artist and Nondolo N from that Feb. 26 qualifier. Scott Zeron has the call thus far for trainer Linda Toscano.

As usual, Ron Burke will send out a strong contingent. Fresh Borgata faces from his stable include among others, Elver Hanover and Bee Two Bee. Ohio standout Elver Hanover has proved before he can go with these types, while Bee Two Bee had been competitive in the Yonkers opens in December. Covered Bridge is another Burke trainee that may give the Borgata a shot. He was second to American History at the Meadowlands on 2/26 and won back-to-back preferreds at that track prior.

Other horses that catch the eye is Nandolo N, coming from the barn of Shane Tritton. He makes his first start of the year Saturday at the Meadowlands and the two recent qualifiers look strong. He won a Yonkers open handicap in 1:50 in November. Jacks Legend N has been a winning machine in Delaware and goes for a dangerous barn in Josh Green. No Lou Zing may give the series a chance as a 5-year-old for trainer Nancy Takter, was a solid 3-year-old the year before last.