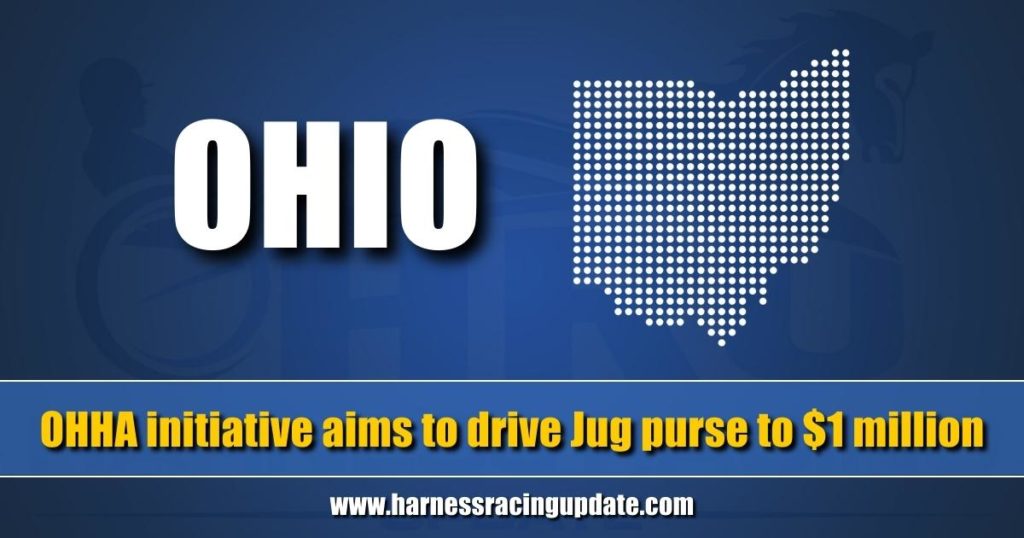 The Ohio Harness Horsemen’s Association will pay the yearling nomination fee to the Grand Circuit races at the Delaware County Fair for all Ohio-sired foals registered.

At last month’s Ohio Harness Horseman’s Association’s (OHHA) annual banquet, board president Steve Bateson used his time at the podium to not only look back at the previous year’s success, he also looked forward to the future by announcing that the OHHA and the Little Brown Jug Society had entered into a new initiative to promote Ohio foals.

The OHHA will be paying the yearling nomination fee for all Ohio-sired foals registered by Dec. 31, 2022 to the Grand Circuit races – the Little Brown Jug, the Jugette, the Old Oaken Bucket and the Buckette — at the Delaware County Fair.

Since 2019, the OHHA has been a financial supporter of the Little Brown Jug and Bateson and Little Brown Jug society president Tom Wright were looking for a way to gain extra benefits for Ohio breeders and, in turn, possibly increase the Jug purse to $1 million.

“Steve and I have been talking about this opportunity for a couple of years,” Wright said. “We are so grateful for the OHHA’s support and we thought this would be a benefit that wouldn’t cost them additional money. The Jug Society would just receive a portion of their sponsorship money two years earlier.”

The goal of the program is simple, if all Ohio yearlings are eligible it would be expected that more owners would make the 2- and 3-year-old payments. More sustaining payments equal more money for the purses.

Similar percentages could increase the purses for the filly companion Jugette and the Old Oaken Bucket and Buckette trots by a combined $150,000.

“A couple of years ago we revised our supplemental requirements for the Jug and Jugette,” said Wright. “Our ultimate goal would be to get the Jug purse to that million-dollar mark. We still have some work to do, but this new Ohio-bred program is a great start.”

The yearling payment program is another ‘outside the box’ initiative by the OHHA. The past few years have seen the association televise races at all 65 Ohio county fairs, promote their ‘Racing with the Stars’ tents and host several Charity Nights to name a few.

“The OHHA has been relentless in their promotion of our industry and the horsemen and horsewomen of the state of Ohio,” said Wright. “This is another example of their dedication to keep Ohio in the forefront.”

The past few years, a couple of Ohio’s top sophomores were not eligible for the Delaware Grand Circuit events due to a missed yearling nomination, most notably last year’s top Ohio pacers Charlie May and Heart Of Chewbacca.

“We always want to have the best horses eligible and to compete in our events,” said Wright. “Ohio-breds are making noise on a national level.”

The last Ohio-bred to win the Little Brown Jug was the 1988 champ, B J Scoot.

“I can’t wait for the next Ohio-bred Little Brown Jug champion,” Wright said.