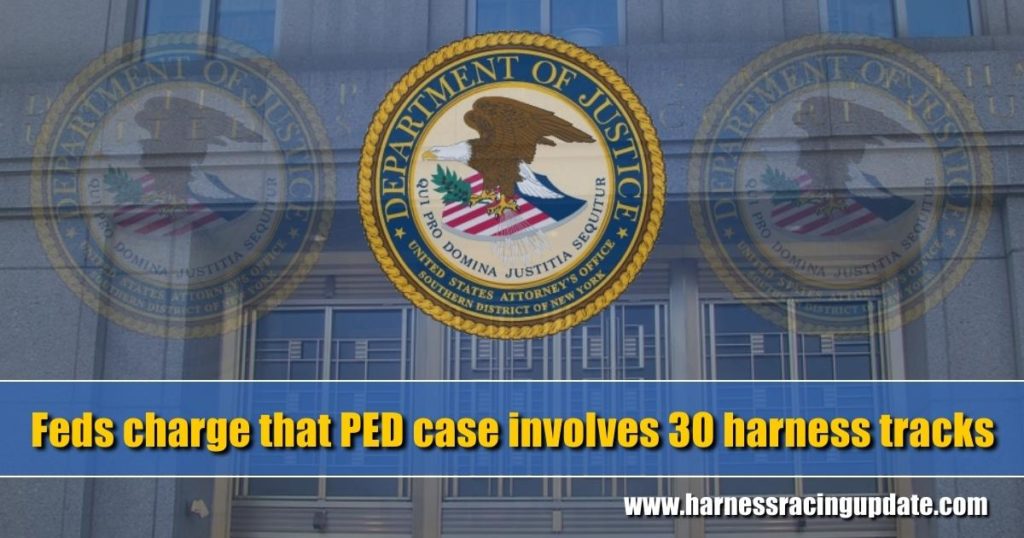 In a document known as a Bill of Particulars, the government has compiled a long list of what it says are victims in the matter involving the alleged use of performance-enhancing drugs in harness racing by five individuals currently under indictment. The list includes 30 harness tracks where defendants Richard Banca, Rene Allard and Thomas Guido III raced and, allegedly, used PEDs.

When denying a motion from the defendants’ lawyers to throw out the indictment, U.S. District Judge P. Kevin Castel ordered prosecutors to provide the defense counsel a Bill of Particulars. A bill of particulars is a written document in which a party has to explain the allegations in his/her complaint, or petition, in more detail.

The indictment covering Guido, Banca and Allard also includes Louis Grasso and Donato Poliseno, both of whom the government charges were distributing illegal drugs. Poliseno was the owner of a Delaware-based veterinary supply company and Grasso is a veterinarian.

The five have been charged with one count of drug adulteration and misbranding conspiracy and face up to five years in a federal prison.

This particular indictment does not include anyone associated with the thoroughbred game, which is why the list of victims includes only harness tracks.

The Bill of Particulars charges that in order to avoid detection of their administration of PEDs, the defendants had to defraud and mislead government agencies, including racing regulators, racetracks, pharmacies, border officials and the betting public, which made all of the above victims of their conspiracy.

The alleged doping was apparently so widespread that it took place at nearly every harness racetrack in North America. Top tracks such as the Meadowlands, Yonkers, Woodbine Mohawk, the Red Mile and Harrah’s Philadelphia Casino & Racetrack made the list as did numerous smaller tracks such as Charlottetown Driving Park, Hiawatha Horse Park, Ocean Downs and Batavia Downs.

The government said that the defendants manufactured, purchased, sold, shipped, delivered, received and administered “at least thousands of units of PEDs…” According to the Bill of Particulars, Poliseno, Grasso and Allard allegedly placed orders for prescription drugs at numerous pharmacies. In a show of the extent they would go to acquire the drugs, Poliseno, Grasso and Allard allegedly used 40 different pharmacies, including ones in Alabama, Idaho and Texas.

Trainer Chris Oakes, who had close ties to convicted thoroughbred trainer Jorge Navarro, will be sentenced Friday. Oakes, 57, pled guilty to one count of misbranding and drug adulteration with intent to defraud or deceive and faces up to three years in prison.