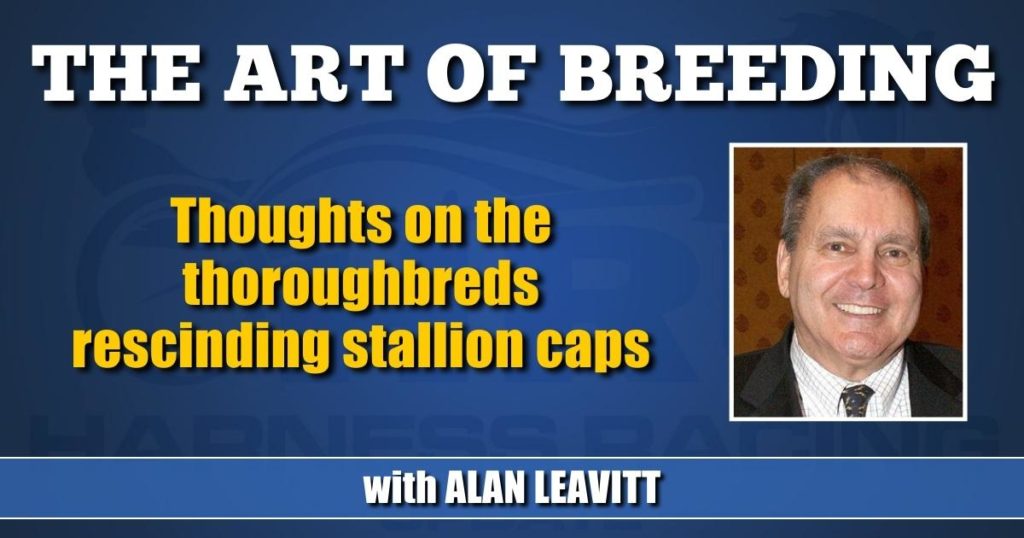 What probably amounts to big news in the thoroughbred business is the Jockey Club’s rescission of the rule capping stallion’s books at 140 mares.

This whole megillah was an exercise in dumbness. For starters, a breed organization, by law, can only make rules limiting stallion books if it is necessary to preserve the genetic health of the breed. Unlike the basis for the USTA’s imposition of a book limit of 140 mares in 2009, none of the same conditions prevailed with the thoroughbreds.

In case anyone has forgotten, the USTA acted after a scientific analysis of our breed, specifically the American trotter, revealed a 17 per cent plus loss of heterozygosity, the variability factor. The first manifestation of this loss is a reduction in the fertility of stallions.

Anyone who was in the trenches in the first 10 years of the 21st century can well attest to the fertility issues we encountered with the trotting sires of that day. To cite just one example, I give you Valley Victory. He was clearly a horse with a very high genotype, or genetic scale when it came to the inheritable speed gene.

Using the deck of playing cards as a sketch of a stallion’s genetic makeup, Valley Victory probably had a deck that started with at least a 10, and went up from there. When two horses are mated, each brings 50 per cent of the genetic makeup of the foal at the time of conception.

But what they bring are two entirely different genes. Valley Victory brought to every mating a high speed gene, or, in this example, a high playing card. So if the mare only presented a card from the middle of the deck, say a seven, the average of the two parents would be a respectable 8 or 9, meaning a decent racehorse who could make money, but not a stakes colt.

If the mare in this hypothetical mating could come up with a highish card, a word just invented, you had a stakes colt. Which Valley Victory had plenty of, on a percentage basis of number of foals he sired from every crop.

Alas, those good foals were hard to come by, because Valley Victory’s fertility was, to use a kind word, quite troubled. To the extent that a Valley Victory pregnancy was a cause for some celebration whenever it occurred. I personally gave some thought to framing and mounting the black circle that appeared on the ultrasound when we checked one of our mares here when we stood Valley Victory.

Back to the benighted Jockey Club, and its short-lived rule, none of the fertility issues we suffered from had any validity in the thoroughbred world. Any running horse who was popular enough to get a “full book” could happily be bred three or four times a day, 24/7. And he got, and still gets, most of his mares on their first cover.

So that’s the thoroughbred book limit caper, and may it rest in peace sans further notice for the next millennium. And while I’m making wishes, may the Jockey Club henceforth refuse membership to anyone possessing less than a triple digit I.Q. Which clearly has not been in effect until now.

Ken Rucker flatters me by asking which of Gimpanzee and Greenshoe I think will be the more successful sire?

First, I wish I were smart enough to come up with an answer, even though I wouldn’t dare say so if I could. But Rucker is asking me to use the available clues from both horse’s phenotype, or visible characteristics, including racetrack performance, to determine their genotypes, that word again, or genetic profile.

Very quickly, I don’t see any reason why both Gimpanzee and Greenshoe can’t be successful sires. And in the interest of full disclosure, we have a now short yearling by Greenshoe we’ll be selling at Fasig-Tipton this fall. Not to blow our own horn too loudly here, but in all modesty he probably can trot a 40 shot right now. Like they say at the rodeo; No brag, just fact.

Also, I couldn’t help picking up on the picture of Shartin’s baby by Captaintreacherous. Again, the world will regard her as a lead-pipe cinch to be a top race filly, based on her parent’s creds.

She could be, but here again, it depends on Shartin’s invisible genotype, not her great feats on the racetrack, which comprise her phenotype. All that said, if her owner ever decides he doesn’t want to personally find out what kind of a race filly she’ll be, we have a 12 by 14 stall already bedded, with the door open.

What struck me about the photo was the fact that, at a couple of days of life, the filly was wearing a halter and was clearly already broke to lead. That’s no surprise if you happen to know Beth Yontz, who boards Shartin. She’s a crackerjack horsewoman, and her husband, Doug, is one of the best blacksmith’s in Kentucky.

It’s basic good horsemanship to halter every foal on its first day, and it should always be led everywhere the dam is led. It takes only a few days, with a butt rope, to break a new foal to lead, and that simple lesson will carry over to every aspect of further training as the foal progresses to its ultimate goal on the racetrack. It takes no extra labor, either. Once a foal learns to lead, one man, or woman, can easily lead both dam and foal wherever they need to go.

Yet one knows that saying this will not make a collective dent in the consciousness of the vast majority of breeders who will be foaling mares this spring. Somehow I’m reminded of a cartoon that appeared in the long since departed Harness Horse magazine, when I was first getting in.

In it a young woman journalist is interviewing a grizzled old timer with a soft hat and a badly bent whip. The caption above the journalist:

“You must have seen a lot of changes in your days.”

“Yep, and I was against every one of them.”