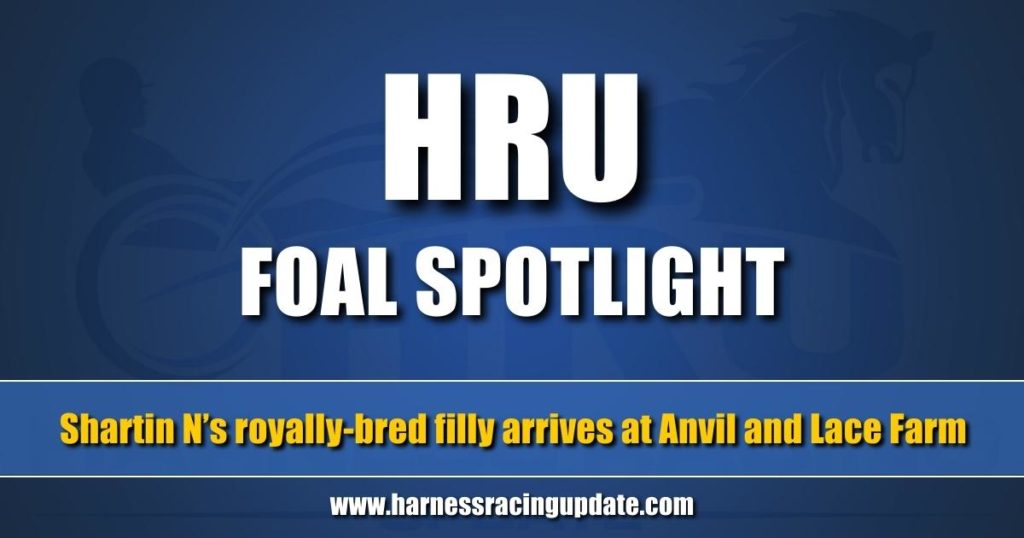 Ola Yoder, owner of Kountry Lane Standardbreds, LLC of Indiana, purchased Shartin N for an undisclosed sum in December, 2020 and had her bred to Captaintreacherous.

“I’m tickled pink with Shartin N’s filly,” Yoder said. “When I first saw a photo of the foal, I told them he’s a nice-looking colt. Then they told me it’s a filly and that made it even better.

“Shartin will again be bred to Captaintreacherous,” Yoder said. “He produces some great racehorses. I’m pretty excited about all of this. I’ve put together a pretty nice string of top mares and I look forward to seeing their foals develop and then go in the big yearling sales.”

Shartin N gave birth Sunday at Beth and Doug Yontz’s Anvil and Lace Farm in Kentucky. That has been home for Shartin N.

“The filly was born at around 1 a.m. February 13,” said Beth Yontz. “It was a textbook foaling. She was just perfect and she loves her baby.

“It has been very exciting to be part of the process,” Yontz explained about breeding and foaling world champion Shartin N. “I’m just so happy that everything went smoothly and that she’s such a good mother.”

Agent Dean Miller, who bought the mare from Richard Poillucci and sold it to Yoder said it was a tough two weeks.

“She was overdue,” Miller said. “And all of us were on pins and needles for two weeks until Sunday.

She clocked an amazing 20 winning miles in 1:50 or better.

Bred in New Zealand, Shartin N did not race at age two and commenced her career in Australia as a three-year-old, winning seven races and $105,718 in purses including the Queensland and Tasmanian Oaks.

Following her defeating Victorian Horse of the Year, Jilliby Kung Fu 1:48.4 ($529,710), at Melton in 2017, when Shartin N sat parked out the entire trip and won in a class record 1:52.5 mile rate over 1720 meters, Shartin N was bought by leading New Zealand bloodstock agent John Curtin on behalf of USA owner Richard Poillucci of South Easton, MA.

Poillucci would then take on partners JoAnn Looney King of Delaware and later down the road, driver Tim Tetrick of Delaware.

Ironically, Shartin N’s foal was delivered on Feb. 13, which also happens to be Richard Poillucci’s birthday.

As with all of the top mares that Ola Yoder has, their foals will be sold at auctions. It will be a great contest to see how much Shartin N’s Captaintreacherous filly will bring.