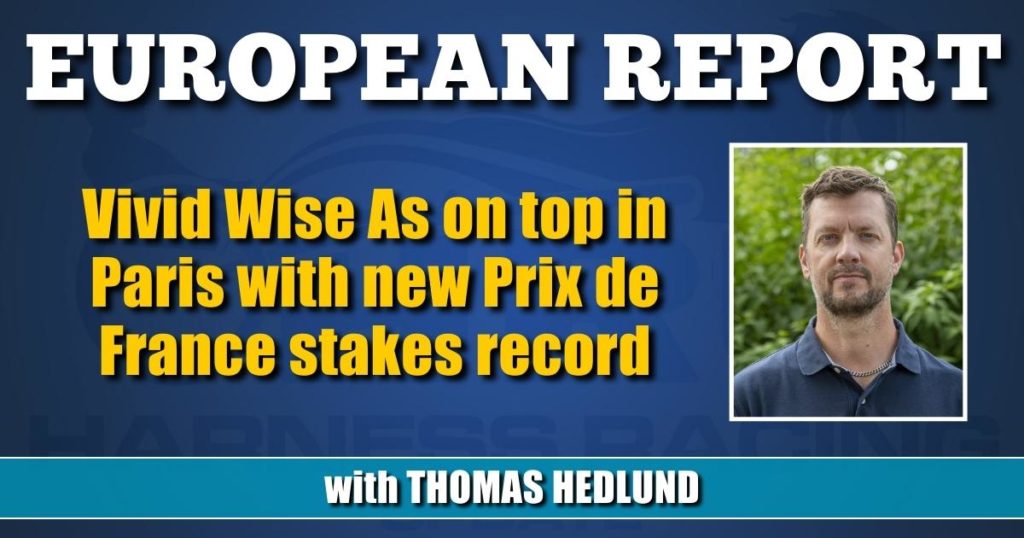 Matthieu Abrivard drove the Italian-bred trotter who continues to prove his strengths and abilities when shorter distances are offered.

Vivid Wise As claimed the Prix de France in new stakes record mile rate of 1:52.1 after a third over trip. Second over trotter Zacon Gio held strongly as third while Delia du Pommereux showed that her form stepped up one level after a pretty disappointing winter meeting as runner up.

Delia du Pommereux can, and will most likely, be aimed against a title defending race at Åby when Paralympiatravet waits later on this spring and it would be a surprise if Vivid Wise As doesn’t get an early invitation for Elitloppet. Gocciadoro’s horse was runner up at Solvalla 2021 and it seems like the son of Yankee Glide is better than ever this season.

The $135,000 Prix Ovide Moulinet for 5-year-olds was held at Vincennes on the Sunday race card and first choice was Philippe Allaire’s Hohneck, who was fifth in the Prix d’Amérique. Even when Hohneck was served a perfect trip by driver Francois Lagadeuc, he couldn’t defend himself when Jean-Michel Bazire’s Hooker Berry (Booster Winner) challenged over the stretch.

Hooker Berry has belonged in the top of the French H-crop but lacked a win since late July last year. This time he came home in a strong a mile rate of 1:57.2 over 1.6 miles.

Paris’ winter meeting is not really over yet and the 3-year-old French bred trotters will meet in the first Criterium for the year this Sunday (Feb. 20). The $225,000 Criterium des Jeunes features 14 horses where Tomas Malmqvist trained filly Jazzy Perrine (Django Riff) is the most merited to date.

To note, there is a generational change in French harness racing regarding breeding and there is a large spread in terms of sires among the 14 contenders.