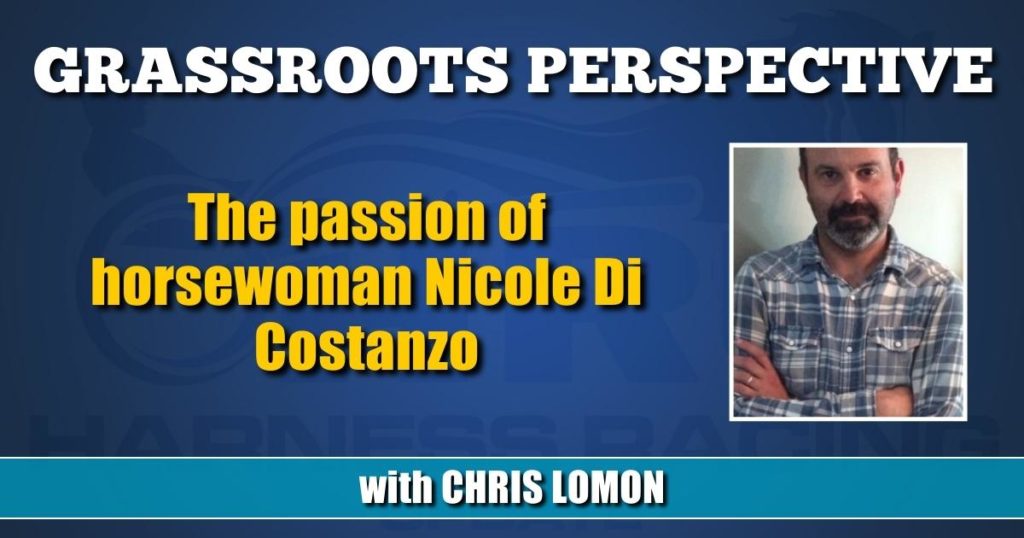 The moment was even better than Nicole Di Costanzo had envisioned.

It was a dream she held for over eight years, the one where she would cross the wire first and make her way to the winner’s circle at a standardbred racetrack in her home state of New Jersey.

On the night of Jan. 7, 2022 at The Meadowlands, the driver in black, white and grey felt she had a good shot of seeing that dream become a reality.

She still felt that way after the starter car sped away and Rockabilly Charm, a well-traveled 7-year-old son of Rock N Roll Heaven, got away ninth.

“There were 10 horses and we got away second-last. I knew he’d be good that night, but I didn’t quite estimate how good he’d be.”

Sent off at 9-1, Rockabilly Charm, bred by Glenview Livestock Ltd., and owned by Victoria D’Alessandro, was making his 107th career start.

Di Costanzo, who had already won several races as a trainer, was chasing her milestone victory in the race bike in the GSY Series amateur race.

Fifth and rolling at the half, the duo was picking up steam and picking off rivals with nearly every stride, continuing their drive to the front around the turn.

“When I pulled him out, he just never stopped coming. As soon as I had tipped him three-deep, I knew he was going to keep going.”

And that’s just what the hard-trying gelding managed to do.

“It was unbelievable. You wait so long for a moment like that and then it happens. It’s a bit of a shock. You try and put it all together in your mind and it’s really kind of surreal. I’ve always pictured that day in my head, but when you’re standing there in the winner’s circle, there’s nothing else in your mind but just happiness.”

Di Costanzo had another reason to smile again one week later when she teamed with Rockabilly Charm to win at Freehold.

“That feeling you get when you win is something you never get tired of.”

Especially for someone who still finds it hard to believe how she wound up in the harness racing industry.

“I never thought my life would pan out this way. I really do have zero background in racing. I was never really that interested. My grandfather, he owned thoroughbreds, but I didn’t really have that much interest in any of it. Basically, I knew it the moment I first sat behind a horse. I was about 15 and I knew from that day on that I wanted to do it. I bought my first horse, Steady Pulse, eight years ago and I still have him today. I was interested in owning, but I hadn’t really thought about being a trainer at that point. I got my first set of colors when I was 16 and I started warming up my own horses and a couple for some other people. I started to really like it and I knew I had to go out and get my trainer’s license.”

In 2018, her rookie season as a trainer, Di Costanzo, who would launch her driving life one year later, posted four wins and 17 top-three finishes from 70 starts.

After putting up two wins in each of the next two campaigns, she enjoyed a banner year in 2021, one in which she recorded 15 wins in 120 starts and $257,264 in purse earnings, both career-best numbers.

A majority of her success came at Yonkers Raceway, where she won 10 times and had her pacer Uptown Funk race in the open handicap.

Currently, she has six horses in her stable.

“I’ve been going to the barn since I was 15 and I can remember the days when I would wake my mom up at 5:30 in the morning and say, ‘Time to get up… we have to go to the barn! I have to see my horse.’ Once I had him [Steady Pulse], and had a reason to be there every day, I never looked back and thought I wanted to be doing anything else.”

These days, Di Costanzo has plenty more to look forward to.

The drive to succeed, she noted, has never been stronger.

“I really want to keep driving. I really do enjoy it. I don’t get many drives, but when I do, it’s something I just love. Eventually, I’d like to get a few of my own to start driving. I want to keep training and get up to somewhere between 10-15 horses. The best part of being a trainer is watching them every week.”

Win, top four or off the board, Di Costanzo still sports a wide smile when she heads home after the races are over.

“Even if they don’t do well, I still have a reason to be happy. I don’t ever get down on myself if I have a bad week because I get to come to the barn the next day and realize they are more horses and I actually got this far.”

Di Costanzo makes the most of her time away from the racetrack.

Whenever she’s afforded the opportunity, travelling tops her list.

“I have made it a point to enjoy life outside of racing. I commit to turning my horses out two times a year for a week or 10 days and go on vacation. I can’t get on a plane fast enough. I want to travel the world. I’ve been to Denmark, Sweden, Mexico, Jamaica and a lot of places in Florida.”

Her trip to Sweden was the perfect marriage between exploring a new place and spending time with horses.

“When I was there, I actually got to train horses. I went to Johan Untersteiner’s barn, and I got to sit behind horses for him. That was an amazing experience. I loved it. It was the dead of winter and just freezing. It was pouring rain, but I was out there, all smiles.”

It’s a familiar look for the young horsewoman who has come a long way in a short time, in a sport that at one time was never on her radar.

Now, she can’t imagine being anywhere else.

“I just want to keep on working hard in every aspect of what I do. I love what I do.”