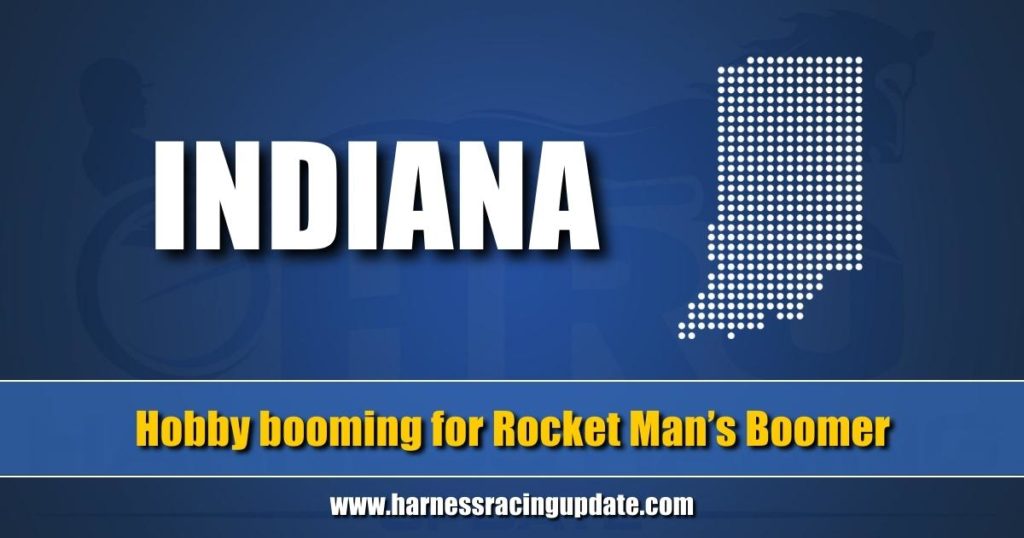 Jack “Boomer” Freeman insists that he is not in the horse business. Racing is just a hobby, a fun sideline when he is not working as a logger. The problem is, his hobby is growing, thanks to the exploits of Indiana Sires Stakes champion Little Rocket Man, a horse he owns in partnership. That success has multiplied this winter at Miami Valley with late 2021 acquisitions Levi and Dirty Judge reaching the winner’s circle with frequency early in this new year.

“I keep telling myself that I’m not in the horse business, but it keeps growing,” Freeman said. “It started off as a play thing. Now, it has turned into something more.”

Freeman has owned standardbreds on and off through the years dating back to when Harrah’s Hoosier Park first opened in 1994. He admits that he’s owned a lot of cheaper horses in the past. However, the arrival of Little Rocket Man provided new opportunities. Since his debut as a 3-year-old in 2019, the Rockin Image gelding has taken Freeman and partner Russ Beeman on quite a ride. Now 6, the pacer has 32 wins from 54 career starts, with earnings of $547,445. The 2021 campaign was the best to date for Little Rocket Man as he won 15 of 25 starts, hitting the board 20 times and earning $258,915. He capped the season with a victory in the $70,000 Indiana Sires Stakes final for older male pacers.

“Whenever you’re successful in something, it’s going to grow. Because of Rocket Man, it’s given me the opportunity to buy some other horses,” the Anderson, IN resident said. “Since he came along, now I have an opportunity to get into this a little more. I really love the business, I love the people. He has definitely opened a lot of doors for me.”

Teaming with trainer and long-time friend Ryan Bellamy is one of those new opportunities Freeman pursued. In early November, the owner privately purchased then-sophomore Dirty Judge and sent him to Bellamy. The Rockin Image gelding has won twice in 2022, and has earned just over $20,000 since entering the Bellamy barn.

“I watched this horse all summer. He’s a beautiful, big, strong horse. I just thought he had loads of talent,” the trainer said. “He got sharp a little bit over the summer, but he wasn’t very consistent.”

A purchase in the last week of December, however, has delivered the biggest success for the team thus far. Bellamy and Freeman were one of three interested parties that attempted to claim Pet Rock gelding Levi out of a $12,500 contest at Hollywood Gaming at Dayton Raceway.

“I looked at the program and this horse caught my eye. He’s an Ohio bred and that helps us as an out of state owner. I watched some replays on him and I told Boomer this is the horse. I watched his last replay. Basically, he got trapped in, and when he got out, he was flying,” Bellamy said of targeting Levi. “We drove over together and put a claim in on him. There were three claims in on him and we won the shake.”

In his 2022 debut, Levi raced second in a $15,000 claimer at Miami Valley after drawing post nine. Back in for $12,500 four days later in the opening round of the Claim To Fame series, he was claimed by Charlie Stewart. Bellamy was set on getting the five year old back, and did so after a winning performance in the second leg of the Claim To Fame at Miami Valley on January 17.

“He was entered back for $12,500 and he was already committed and I knew we were going to lose him,” Bellamy explained. “I told Boomer he’s going to win the series. We gave $16,200 when we claimed him back and he won the final.”

Steered by Sam Widger, Levi took command early in the $25,000 final, held Jan. 24. Setting the fractions, the pacer would draw away late to win by nearly three lengths in a time of 1:53.2. Levi was paid into the next Claim To Fame series, made eligible to both the $20,000 and $30,000 classes. Bellamy took a chance when entering his charge and dropped Levi into the $30,000 series with an eye on keeping him in the barn.

Starting from post two on Thursday night (Feb. 10), Levi and Widger were the early leaders before being shuffled to second behind favored Voracity. They tracked the leader throughout the mile before swinging out in the stretch and putting a neck in front. Levi tripped the timer in 1:52.

“That’s one thing I liked about the horse as I watched him race. He seems to be a really good finisher,” said Freeman. “He’s done very well for us. So far, this year has just been an unbelievable start.”

Now a winner in three of five seasonal starts, Levi has quickly banked $35,625 to begin the year. Since he has already qualified for the final, Bellamy hopes to give the gelding at least one more start in the series while also working in some needed time off. Levi came to the barn with a quarter crack that still lingers.

“He does have a quarter crack on his right front foot that could probably use a few weeks. If we could get that 100 per cent, he might even be a better horse than what I think he is,” Bellamy said.

Levi and Dirty Judge are not the only horses that have delivered victories for Freeman in 2022. Hoosier Celebrity, purchased last May, earned over $27,000 in 2021 and has already collected $18,960 in five seasonal starts, winning twice in the Buckeye State. Freeman also owns Encore Encore gelding Sign Here And Here, a six-year-old trotter with $150,000 on his card. The owner is excited to see Sign Here And Here return to the track this year.

“I think he has a lot of promise. He’s a horse that went lame and I bought him and gave him time off. I really have a lot of high expectations for him,” Freeman said. “He’s got a :54 record. He’s a very good horse if he comes back sound. So far he’s done everything that he’s supposed to do. I’m really excited about him.”

If that were not enough, Freeman owns two freshmen – one trotter and one pacer – with Ken Rucker. They are both currently in training, and while early reports are good, he is not getting his hopes up yet. A long road remains before either sees a starting gate. For a man that contends he is not in the horse business, he has a lot of irons in the proverbial fire.

“I tell myself every day that I’m in too deep as it is,” Freeman said. “Your mind says no, but your mouth says yes. If they keep doing well, I’ll get more. Hopefully it is something that continues to grow.”