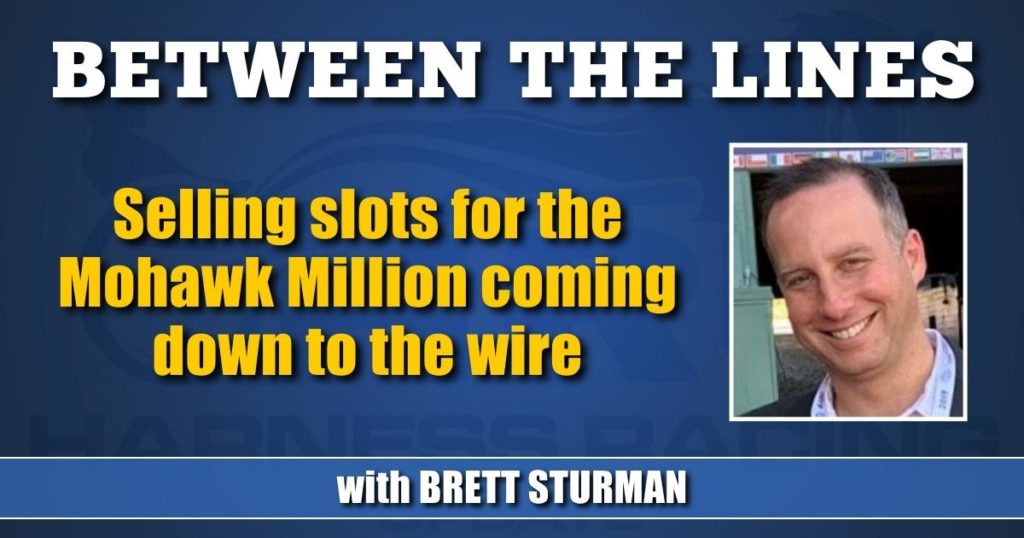 Selling slots for the Mohawk Million coming down to the wire

This Tuesday (Feb. 15) looms as the date when nominations close for all major stakes at Woodbine Mohawk Park in 2022. Those stakes comprise over $20 million in purses including the Breeders Crown which Woodbine plays host to this year, as well as a pair of $1 million races.

One of those races with a seven-figure purse is the Pepsi North America Cup, and the other is the Mohawk Million for 2-year-old trotters. February 15 is particularly critical with respect to the Mohawk Million, because in order for the race to be a “go,” the nine race slots must be purchased by the nominating deadline (the 10th race slot is awarded to the winner of the William Wellwood Memorial at the end of August).

With the first of two $50,000 fees for the Mohawk Million due in a few days, there is still work to be done to fill the race.

Bill McLinchey, the director of standardbred racing at Woodbine Entertainment, said Wednesday (Feb. 9) the race is not, yet, sold out.

“We’re close, but we’re not there yet,” McLinchey said. “We have to have nine (slots), and we have a few owners that are still thinking it over. I know it’s an investment and a big ask, and we really appreciate everyone that’s bought one, or even thinking about buying one.”

Aiming to set up for the third edition of the Mohawk Million, having slots open at this stage isn’t unchartered territory.

“The first two years that we had this race, I would say has gone right to the wire both times,” said McLinchey. “Going into this weekend, we’re almost at the exact spot that we were last year. I hope that we’re able to announce that it’s a go; I’m optimistic about it.”

Steve Heimbecker is one owner that said he has purchased a slot again this year. He told Woodbine communications (full story here): “From an owner’s perspective, racing for that kind of money in a prestigious race is a big attraction for me. I also think it’s nice because I love the racetrack at Mohawk. I really do think it is one of the best standardbred tracks in North America. And I love trotters.”

Reasons for optimism stem from this being the third year of a race format that’s gaining interest internationally. And specific to Woodbine, the Mohawk Million has been a success thus far despite being launched at the onset of a pandemic. Knock on wood, but it appears as though this should be the first time in three years that the racing calendar and stakes schedule at Woodbine won’t be at the mercy of government-imposed shutdowns across the province. The first two years of the Mohawk Million, all required slots filled even though it was unknown if owners would be able to attend the race in person due to travel restrictions.

With presumed uninterrupted racing ahead for 2022, this year’s stakes Woodbine returns to a more normal schedule. At the top of those stakes, is the placement of the Pepsi North America Cup from September last year, back to its traditional timeslot in June. Also, to be moved from late August and September and included on the June 18 North America Cup card are the Fan Hanover, Roses Are Red, Armbro Flight, Goodtimes and Mohawk Gold Cup Invitational.

Because of the stoppages last year, having to move the major early-summer stakes to later in the summer certainly provided logistical challenges for all racing parties, but at the same time it did create massive attention towards the track for about an eight-week period across August and September. Gearing up with an overabundance of major stakes almost immediately after the Hambletonian from the Meadowlands in early August, Woodbine became the extended center of the harness racing world, and it was reflected by the amount wagered on its product over that period.

From that success, I wondered if a case could be made to keep the stakes schedule as it was, focusing on a monster two-month period as summer concludes.

“I think after the success the races had in late August and early September, we certainly had to look at it and consider where we landed,” said McLinchey. “The thing is, the North America Cup was always successful in June as well. And what I kept coming back to was that for us, the North America Cup being the first major stake and where none of the top 3-year-olds have yet separated themselves from each other at that point. We’ve always been proud to be the first spot for them, where they race and not knowing who the best 3-year-old is at that point. It fits well, being first.

McLinchey also noted the scheduling not only as it pertains to conflicts with other major stakes at Woodbine, but also races conducted elsewhere.

“As we get into August and September, you’re starting to get into the sire stake finals in other jurisdictions,” McLinchey said. “We know the competition in the stake world is picking up with Kentucky as an example picking up steam, and racing in Ohio, Pennsylvania and New Jersey are rolling too, and we want to continue to make sure that we’re one of the main options to race at.”