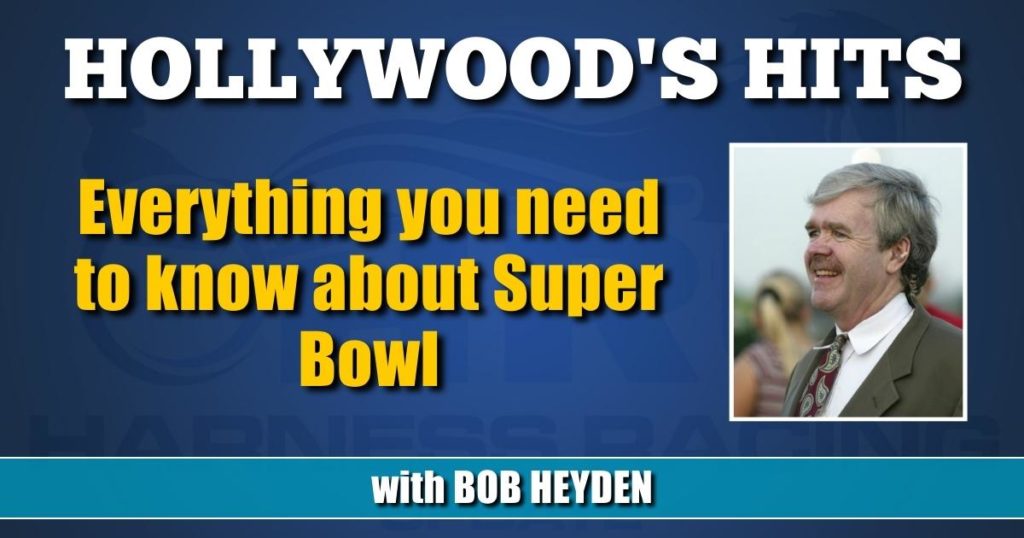 Everything you need to know about Super Bowl

Bear with me a bit. For 51 weeks of the year this won’t fly. But for Super Bowl Week, I will empty the briefcase on the table. Thanks for the patience.

The 1969 game was the first one referred to as the Super Bowl. The 1967 Packers-Chiefs and 1968 Packers-Raiders games were the “AFL-NFL Championship Games.”

The trotter named Super Bowl raced from 1971-1972 out of Stanley Dancer’s barn. He was tied for fifth in the Horse of the Year balloting in 1971.

Super Bowl was second in the HOY balloting in 1972 and won the Trotting Triple Crown setting five world records on Hambletonian Day.

He retired 38-for-51 and was the 1972 Trotter of the Year. That marked only the second time that a pacer and a trotter had gone 1-2 in HOY balloting. A decade earlier, Dancer did the same with Su Mac Lad and Henry T Adios (1962).

As a stallion, Super Bowl sired six Hambletonian winners (two before the Bengals’ last appearance in the 1988 Super Bowl — four after). Only his sire, Stars Pride, did better with 8.

The Super Bowl-sired Hambletonian winners were:

1989 — Probe was part of the legendary dead heat with Park Avenue Joe.

1991 — Giant Victory — Yes, the same year the Giants beat the Bills in the Super Bowl

1993 — American Winner (over Pine Chip, who was voted Trotter of the Year).

1995 — Tagliabue was the sixth and final son of Super Bowl to win the Hambletonian. (Super Bowl had the favorite in 1992, the filly Armbro Keepsake finished fourth).

Super Bowl was 25 years old when had his last Hambletonian credit.

Who is Super Bird and why was he included here?

Super Bird was the nickname of Albatross (sire of the winner of the first million-dollar race, Niatross).

This year marks the 50th anniversary of this epic duo racing together — going 1-2 in HOY balloting something that would not be repeated by stablemates for 40 years until Linda Toscano did it in 2012 with Chapter Seven and Market Share.

Albatross was the division winner in all three years he raced, his 2-year-old season under the tutelage of Harry Harvey and then to Dancer.

Super Bowl also won his division both seasons on the track at 2 and 3.

Together, they won 5-of-6 Triple Crown races between them.

The #1 standardbred farm in the world would be the home for these two for the next quarter century. Side by side again. Neither ever knew any other home.

They dominated in the stallion ranks. With their first crops stepping onto the track the same year the Meadowlands opened, both rose to the top of the breeding ranks (Super Bowl and Speedy Crown as a unique siring tandem) No one has ever surpassed the $75,000 Albatross siring fee and nobody has ever had three straight Horses of the Year with two different horses — 1979-1980 Niatross and 1981 Fan Hanover.

Super Bowl and his sire Stars Pride combined for 14 Hambletonians.

No trotting sire and no pacing sire have ever had more foals than these two who could not be, and would not be, separated both on and off the track.

They were even 1-2 in Hall of Fame honors. The Living Horse Hall Of Fame started in 1996. Albatross was inducted year one, Super Bowl in year two.

Ken Stabler, the 1976 Super Bowl winner with the Raiders, was part of the “George Plimpton Challenge” and made it to the Meadowlands in 1987.

Willie Lanier was a great middle linebacker for the outstanding KC Chiefs games of the 1970s. He was at the Big M several times.

Richard Caster, the tight end for the NY Jets, participated in the Celebrity Challenge races.

Joe Namath was at the Meadowlands on opening night in 1976 with his agent and the man most responsible for the advent of night harness racing in New Jersey — Sonny Werblin.

Paul McGuire, NBC football announcer, was a good friend of the sport of racing and a participant in some amateur events.

Wellington Mara and Leon Hess, owners of the NY Jets and NY Giants. Never will I forget them coming into the press box at the Meadowlands together from the President’s Room to make a $2 bet — each!

Drop The Ball, the outstanding filly for Eric Cherry, actually tried her hand in the 2011 Meadowlands Pace elims versus the boys.

Wayne Chrebet — Talk about of the good guys. He was a fan favorite receiver for the NY Jets and an avid harness owner.

Fake Left, the 1992 Little Brown Jug winner was part of a one-time Meadowlands-only happening. Two $100 horses, one night, same driver, same track. Cat Manzi July 31, 1991. Manzi got them both home — $191 for Fake Left then a 2-year-old and $100.60 for Hundred Kisses, who a few years later celebrated the Jug and the entire Triple Crown with her son Blissfull Hall.

These are Palone’s lifetime numbers as of Feb. 10:

Speaking of Filion, Palone broke Filion’s record for wins as a driver with his 15,181st on July 5, 2012 at The Meadows (Herculotte Hanover).

He won his first race the same year the Bengals debuted in the Super Bowl in 1981.