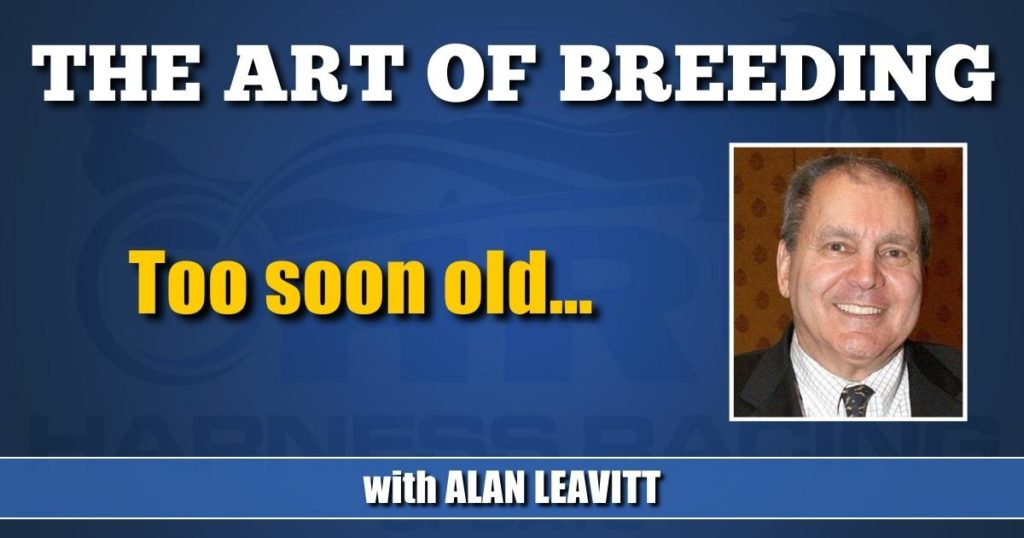 Although he’s largely forgotten today, Tar Heel played a very prominent role in my early days as a breeder.

Tar Heel was a son of Billy Direct, a great pacer who won everything and set several world records. He was a big, black horse for whom the term “fast gaited” was created. In his day, most races were single file affairs to the ¾ pole, and then the real race would happen. Billy Direct was so powerful that he could go to the front anytime Rupe Parker felt like it and laugh his way home.

He was foaled in 1934, and at 4 he set a world record of 1:55 against the fence. Although the last recorded time trial of the present day was Cash Hall’s 1:51.1 at Delaware in 2006, in the early days they were de rigueur, and there were literally hundreds of them during the fall race meeting at The Red Mile.

For those uninitiated on the subject, a time trial was a fairly true test of a horse’s speed and courage. As opposed to an actual race, where there are other horses in front at some point of the race, in a time trial the horse trialing was looking down two long, open stretches. It could be intimidating to more than a few otherwise good racehorses.

Conforming to my belief, and the great Federico Tesio’s, that 2-year-old brilliance is the foreshadowing of a stallion’s future sire potential, Billy Direct was a winner at 2, although you had to go back and check the results of the fairs to find his name. I particularly was struck by seeing his name as the winner of a 2-year-old race at Mineral Point, WI. That was the track on which Volo Song, one of the greatest trotters who ever wore a bridle, suffered his fatal breakdown from the bad track conditions.

Billy Direct was the first pacer to stand at Hanover Shoe Farms. He was one of two potentially foundation horses to die there early. The other was Spencer Scott, who lived only long enough to sire Rodney, the greatest trotting sire never to sire a Hambletonian winner.

Their deaths had nothing to do with mismanagement, just part of the risks inherent in every living creature, including these beautiful animals who give our lives meaning.

Back to Tar Heel, he was the best racing son of Billy Direct. He raced for the powerful stable of Will Reynolds, trained and driven by another immortal, Delvin Miller. The various branches of the Reynold’s family made indelible marks in American industry both in the tobacco and metal businesses, as well as our little world.

Tar Heel was one of two great colt pacers Delvin developed and raced for Mr. Reynolds. The other was Solicitor, destined, like Delvin himself, to play a pivotal role in my life.

The classic pacing stake of the day was the Little Brown Jug. In their year, Tar Heel won it and Solicitor was second to him. In those days of heat racing, it could take all afternoon, and sometimes longer, before you had a winner. The year Keystoner finally won it for Frank Ervin, it had gotten dark before they held the final, decisive heat. There were no lights on the Delaware track in those days, so they got cars to park all the way around the track with their headlights on.

Keystoner emerged from the black of night as the winner, but I sometimes wondered, somewhat whimsically, if the experience hadn’t affected his personality, because he turned into a seriously vicious horse after he went to the stud at Castleton.

Will Reynolds passed away during Tar Heel and Solicitor’s 3-year-old seasons, and all the Reynolds horses were consigned to the Harrisburg sale that fall. The two prizes were the two great colt pacers.

Lawrence Sheppard, showing the foresight that made Hanover the greatest farm in our sport, wanted a top pacing stallion. He couldn’t decide which of the two, Tar Heel and Solicitor, he liked the best, so he bought both of them.

Solicitor went for $100,000, and Tar Heel for $125,000. Steve Jones was good enough to enlighten me that Walter Michaels was the underbidder on Tar Heel. Michaels was a big player in his day, although, as John Gaines, liked to say, somewhat price conscious. He once came home from a mixed sale with six stallions, all bought for less than $10,000, with the intention of standing them at his Bonnie Brae Farm, in Ohio.

Michaels was the president of the USTA at one point, and he changed the whole course of our sport for the better when Hal Jones, his farm manager, introduced artificial insemination with his great stallion, Gene Abbe.

Tar Heel quickly became a leading sire, both of racehorses and broodmares. They were the perfect match for Adios. That was the cross, Adios on Brenna Hanover, who was by Tar Heel, that produced Bret Hanover. Although Bret is a footnote today, he was the only pacer ever to be voted Horse Of The Year at 2, 3, and 4.

The Shoe Farms naturally wanted a son of Tar Heel to take over from his sire when the time came. Alas, that never happened. In fact, with only one crazy exception, Tar Heel never sired a top sire.

The one exception should have involved me, but I wasn’t smart enough.

In 1963, as I was just getting Lana Lobell Farms underway, Lyss Steele approached me at the Harrisburg sale. There was a 3-year-old pacing colt named Steady Beau selling that morning in the mixed sale, and Lyss, short for Ulysses C. Steele, had four other breeders who wanted to buy the colt and stand him with me.

Steele had bred Steady Beau, who was by Tar Heel, out of Steady Beat by Adios. Billy Haughton had raced him both years, and as a 2-year-old he had won the biggest race of the day for 2-year-old pacers. At 3, he did absolutely nothing.

In those days the horses to be sold were lined up along one wall of the Fair Show arena, waiting their turn in the ring. I dashed over to the lineup and checked out Steady Beau. He was standing with all four feet in what looked at first glance like the same hole, ears laid back, and a bad haircoat. He made me think of a horse left out in a bad storm, and just trying to survive.

So I, who since have come to realize how important Steady Beau’s stakes wins at 2 were, promptly turned him down.

So a guy from Tennessee, John Colvin, bought Steady Beau for $25,000. He took him home, and wrote ads that started with, “My sermon today…” And from that humble beginning, Steady Beau sired, among other nice horses, Steady Star, who became the fastest standardbred of all time when he time trialed in 1:52 at Lexington.

As the Pennsylvania Dutch say; Too soon old, too late smart.