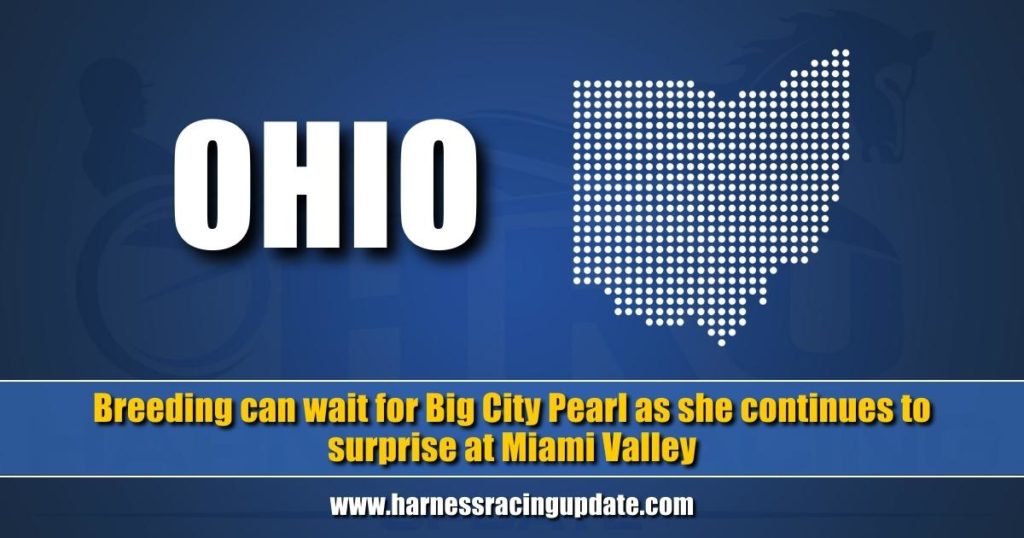 When Big City Pearl dashed across the wire first in back-to-back weeks at Miami Valley Raceway, trainer LeWayne Miller was just as surprised as the betting public. After all, Miller never had designs on dropping the 4-year-old trotter into the $30,000 open handicap. However, when races don’t fill, interesting things happen.

“I entered her in the class below, non-winners of $12,000. She fit that, but they didn’t go with that class,” the conditioner explained. “They asked if I would put her in the open and I said yeah, just to get her a race and keep her tight. The last two starts she’s really surprised us.”

With two races under her belt, Big City Pearl lined up behind the Miami Valley starting gate Monday, Jan. 24 as the second-longest shot on the board with 49-1 odds. She started the season in the open handicap, managing fifth in her 2022 debut. This time, however, the Chapter Seven—Annalina mare was on her game for Miller, who steered the trotter.

“I got away in the back and she got a little bit aggressive, so I pulled her hoping I could get cover. And then she just kept marching,” Miller said. “She got a little soft around the last turn. I thought she was done. But as soon as we hit the straightaway she took another gear.”

Big City Pearl pushed a neck in front of Pass The Vape to take the open handicap in 1:54.3. Returning a week later, the mare scored her second consecutive in the class. Brett Miller handled the driving duties in the Jan. 31 start, where the duo were sent off at odds of 11-1. Once again, the 4-year-old won by a neck, this time over second choice Refined and Mitchell Cushing in a time of 1:54.2.

“We were going to give her last week off, but she raced so well that we gave her another start,” the trainer conceded.

Just as the move to the open handicap was not part of the plan, the strong start to the new season was not anticipated either. LeWayne Miller’s brother, Daryl, purchased Big City Pearl last September with plans to breed her in 2022. She is booked to top Indiana stallion Swan For All. Her recent success may change those plans.

“I just talked to my brother the other day. I said we better put her on Bluegrass Staking. We might have to stake her up a little bit, just a few here and there,” LeWayne said. “She’s a well-bred mare, so she could possibly step it up. Verlin always liked her and always thought she was better than what she was doing. She just didn’t have a whole lot of opportunity throughout the summer to show herself.”

Developed by Verlin Yoder, the trotter captured three of nine freshman starts. At 3, Big City Pearl lined up behind the gate 23 times, winning on five occasions. Yoder entered her in the Hambletonian Oaks, where she missed the final after racing 10th in her elimination. Daryl Miller, competing under the banner of Miller101 Racing, purchased the sophomore the next month and she qualified for the new connections Oct. 9. In nine attempts racing out of the Miller stable, Big City Pearl recorded two wins, but she also missed checks three times.

“She was a little inconsistent. We were dealing with some health issues with her, but she seems like she’s overcome that now,” Miller said. “She seems to like the weather. I don’t know if she likes the cold weather better or what. She’s healthier too, so that helps.”

A winner of $56,575 at three, the trotter is off to a fast start in the new year. She has yet to miss a check this season, with a runner-up finish to go along with the pair of wins. Miller and his brother had hoped that Big City Pearl could generate some income before moving to the breeding shed. The mare banked $36,500 in the first month of the year, and could prolong her racing career.

“We left the door open. We’re not sure. It just depends on how she does,” commented the trainer. “If she keeps making money, we’ll keep racing her. If she tells us that she’s done, we’ll breed her.”